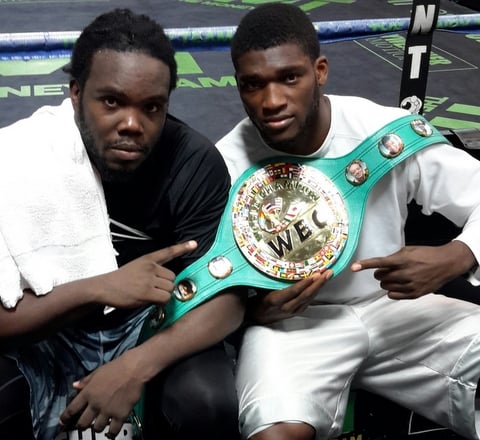 This Saturday at the MGM, Las Vegas finds boxing in an unusual place that it hasn’t occupied in quite some time, a heavyweight title fight that has the fans talking and polarizing opinion.

Practically every man and his dog has had a crack at calling the outcome for this fight so we thought we’d get some feedback from someone close to the action, undefeated Polish heavyweight Izu Ugonoh (10-0, 8KO’s.) Izu has served as one of Bermane Stiverne’s chief sparring partners for this fight and ESB took the opportunity to ask him how the camp has gone for Bermane and who he thinks will win the fight and why.

ESB: Having sparred previously with Bermane have you noticed anything different in this camp, more intensity etc?

Izu: Bermane is in a very good shape, as he was before the fight with Chris Arreola. The only difference is that styles make the fight and then preparing accordingly.

ESB: This time Bermane is conducting his camp as a defending champion rather than a contender, have you noticed a change in his demeanour/attitude?

Izu: Well I think that now that he holds the belt he has even more confidence in his capabilities. He seems to know exactly the game plan he wants to execute against Deontay Wilder.

ESB: Bermane seems like a pretty laid back guy. Does that translate in sparring or does he step it up a notch?

Izu: Bermane has his way of fighting that suits him, at times he might look laid back but really he is setting you up for a big counter punch. He will also bring it to you every now and then, so don’t be fooled.

ESB: Power wise we have seen him do damage before, how hard has he been hitting in this camp?

Izu: I think the better question is how well can Wilder take his punch?

ESB: This is a fight which seems to have really polarized the boxing community. The common consensus seems to be either Wilder early or Stiverne late. Do you have an opinion on this?

Izu: Well no one has seen Wilder win a fight on points so I guess a knockout is his only option. Whereas Stiverne can win in both ways therefore he is my favourite for this fight

ESB: One outcome that hasn’t been raised quite so much is Stiverne by early KO. Do you think this is a possibility?

Izu: That’s what I like about boxing, there is always that possibility!

ESB: For an up and coming fighter such as yourself how valuable is it to get that kind of work from the champion?

Izu: The experience is priceless to me. Not only is Bermane Stiverne a smart boxer but he can punch too so I had to stay focused at all times. I think I’ve learned a lot and gave the champ some good rounds. I will definitely be more confident walking into my fights this year

ESB: Now that camp has ended are you hoping to fight soon, when is the plan to see you in the ring next?

Izu: I’m looking forward to put in some work the next couple of weeks. After that I will be ready to fight in March.

We thank Izu for his time and look forward to seeing if his prediction proves correct. Roll on Saturday, and while many fans may disagree on whom wins I think most do agree that this is probably going to end by knockout. Do you like the early power of Wilder or the sneakier counter punching of Stiverne coming on strong down the stretch? Either way it should be a good ‘un for as long as it lasts.