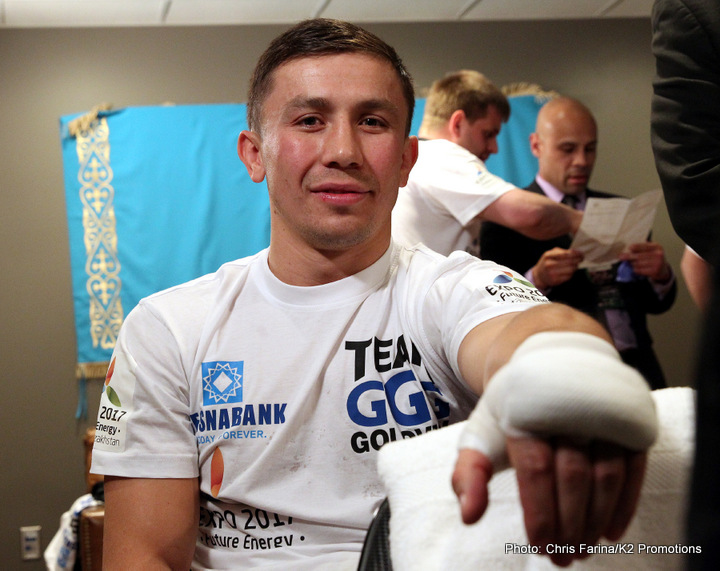 To become a mainstream star in boxing is to have it already written in the stars. It is not something that can be manufactured from scratch or be forced upon the public (not that the powers that be don’t try).It is an inherent gift that defies all manner of formula and blueprint. Those who’ve had such powers bestowed upon them seem to have a red carpet rolled out at their feet, right over the backs of envious peasantsand into the exclusivity of popular culture. It’s not fair but that’s just the way it works.

But there’s a plus to this strange effect: It is highly contagious and as boxing history has shown, the distribution of this power is good for the sport. One of the more famous carriers was of course,Oscar De La Hoya. Before he turned professional, Oscar was already a superstar: an Olympic Gold medalist with a great backstory, handsome and could fight like the dickens. There was little wrong Oscar could do and his nickname, “The Golden Boy” was perfect because a fight with De La Hoya meant big money. If you could beat him, then you became an attraction yourself, though not necessarily a star (Shane Mosley never really transcended boxing the way many thought he would have). But if you beat him and had flair and personality to go along with your ability, then you were a Bernard Hopkins or Floyd Mayweather Jr.Yes, Bernard and Floyd were already pound – for – pound fixtures in the fight game but as much as they like to gloat about being self – made, they would have never reached the heights they did without Oscar’s help. Manny Pacquaio and Felix Trinidad were also beneficiaries.

This brings us into the present and the latest seeker of the pugilistic Holy Grail: WBA, IBF and IBO middleweight champion, Gennady Golovkin. In an era terribly short on legitimate stars, Golovkinis looking to become one. He’s done what he’s supposed to do, win and he’s done so with concussive efficiency, as evidenced by his 22 straight knockouts. HBO has given him the exposure and a cool nickname, “Triple G” (although I would have went for something a little flashier, like, Gennady “By Nature” Golovkin or maybe, Gennady “Are You Ready to Party?” Golovkin) and he’s learned both the English language and how to play to the crowd, especially the Hispanic fans who make up a large portion of the boxing viewership in the U.S. So far, so good.

But his ratings, while respectable andholding steady, haven’t placed him into the consciousness of the casual sports fan. Luckily, there’s someone who might be able to help and we all know who that “someone”, is.

Make no mistake about it, Saul “Canelo” Alvarez brings the dough, lots of it.He’s the man carrying the Golden Fleece although it is the public who are beginning to feel like they’re the ones being fleeced. Canelohas obvious talent but that talent is now being overshadowed by a growing arrogance. He’s taken one of boxing’s original weight classes that began in the 1840’s (depending on your sources) and reinvented it, 155 pounds to be exact, to suit his own agenda. The Mexican has shown little interest in engaging his Kazakh adversary despite campaigning in the same weight division. His reasons for doing so have comes across as little more than stalling tactics.
Meanwhile, Golovkin and the boxing publics’ patience is thinning like an anorexic ballerina.

The situation is reminiscent of former Jr. Middle and Middleweight champ, Mike McCallum and his fruitless search for a fight against one of the “big four” (Leonard, Hearns, Duran and Hagler). “The Body Snatcher” as he was called, was good, real good, maybe even great but we’ll never know because he never got his chance. To see him in recent interviews, still bitter about getting screwed is downright sad. But you can’t help but feel for the man, surrounded by opportunities that were so abundant yet unavailable.

Is Golovkin due to suffer a similar fate? It’s quite possible because while upcoming challenger Amir Khan isn’t seen as a serious threat (no disrespect to Khan, who has never shied away from a challenge) because of his natural size disadvantage and a chin that is as unpredictable as the words that come from Donald Trump’s mouth, the road ahead could get bumpy.

Firstly, Canelo really doesn’t need Golovkin. When a fighter reaches Alvarez’ popularity, he is able to pick and choose his opponents, the size of both the gloves and the ring, negotiate purse splits, the aforesaid weight adjustment and sometimes, even have a say in the venues in which he will fight. That’s the perk that comes from being the cash cow but as we’ve seen time and time again, when a fighter has this much clout, they have the tendency to become very irresponsible. Canelo could conceivably leave his career in cruise control, avoid the biggest threat to his standing and still make plenty pf money along the way but there’s just one problem with that.

The Jr. Middleweight division is not a one – man – show. Canelo is not comparatively dominant in his division as Golovkin is in his. In fact, he may not even be the best the division has to offer. A strong case could be made for Philadelphia’s Julian Williams, IBF belt holder Jermall Charlo, his twin brother Jermell, Demetrius Andrade and the man who many believe already beat Canelo, Erislandy Lara. Every one of these men have the style and ability to ruin a lot of big plans and maybe that’s why Triple G is really beginning to push for the fight. He knows how delicate the situation is. The lottery ticket could wind up in someone else’s hands and unlike McCallum, Golovkin doesn’t have four lucrative options, just one. If Alvarez gets knocked off, goodbye boxing immortality.

Oh, the fight could always come off, too much is made of a loss nowadays but it won’t be the same and we all know it.

Like most fans, I’m crossing my fingers that this fight is made because it really would be a spectacular event, the kind of event that boxing hasn’t had without Floyd Mayweather Jr. attached to it. I’d favor Golovkin rather decisively, taking his consistency over Alvarez’ selective bursts of explosiveness but I think it would bring out the best in both men, one of those confrontations that we revisit on Youtube because it turned out to be as good as advertised.

I’d prefer that scenario to the one in which Golovkin, twenty years from now, is bemoaning the fact that the big one got away.