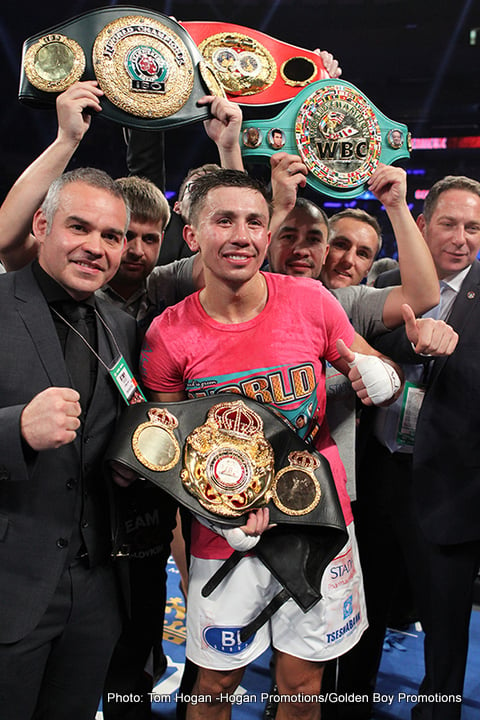 Tom Loeffler, the promoter of middleweight sensation Gennady Golovkin, has strongly suggested the unbeaten terror known as GGG could have not one but two fights in the UK, against British opposition, this coming summer. As has previously been reported, Billy Joe Saunders is a very real possibility for Golovkin at a big stadium in the UK this summer (provided Saunders gets past Max Bursak in April and Golovkin gets past Dominic Wade also next month), but Loeffler, in speaking with Sky Sports, also has his eye on a possible Amir Khan fight.

Khan, if he manages to beat Canelo Alvarez in May, would be in the exact position Canelo is in right now: mandated to fight Golovkin. And Loeffler says he feels a Khan challenge of GGG would be a big fight in both the UK and the U.S.

“The priority is the mandatory position that Gennady has with Canelo,” Loeffler told Sky Sports. “That would be the biggest fight in boxing. Clearly, if Amir won [on May 7th] then he would inherit the championship and the order from the WBC is clear: the winner from that fight must fight Golovkin or get stripped of the title. Khan has a unique style with his height, reach and hand speed but I think Gennady would be able to adapt. Gennady’s ability to cut off the ring means he can adapt to [Khan’s] style. Amir brings a lot to the table. That’s what we always said about a fight with [Carl] Froch because he would bring the UK fans. We’ll see a similar situation with Khan. Khan-Golovkin would be a huge fight in the UK but would be even bigger in the US, from a financial perspective.”

Of course, all this talk will become meaningless if Alvarez does as most people feel he will, and beats Khan in May. Then we will be back to the drawing board as far as getting a GGG-Canelo fight signed, sealed and delivered (will this super-fight ever actually happen!). And even if Khan manages to topple Canelo – causing one of the biggest sensations in boxing in years in the process – will the former 140-pound champion really opt to stick around at middleweight and face the mighty Golovkin? Most people seem to doubt it.

But Loeffler, who makes it clear he is still very keen on a Golovkin-Saunders fight, says his star fighter could wind up facing both Saunders AND Khan this year.

“We would still be very interested in a fight there [the UK] with Saunders,” Loeffler said. “If [Canelo or Khan] doesn’t happen, for whatever reason, then Saunders would be at the top of our list to unify the middleweight division. If the stars align, I could see a scenario where Gennady fights two premiere UK fighters in 2016, who would both be world champions by that point.”

British fight fans would love it if this scenario – however unlikely – did unfold. Not one but two fights between the best fighter on the planet (in the opinion of many) against British boxers, possibly on British soil! The UK would be the envy of the boxing world. And if you were forced to take a pick: who out of Saunders and Khan has the best chance of defeating Golovkin?