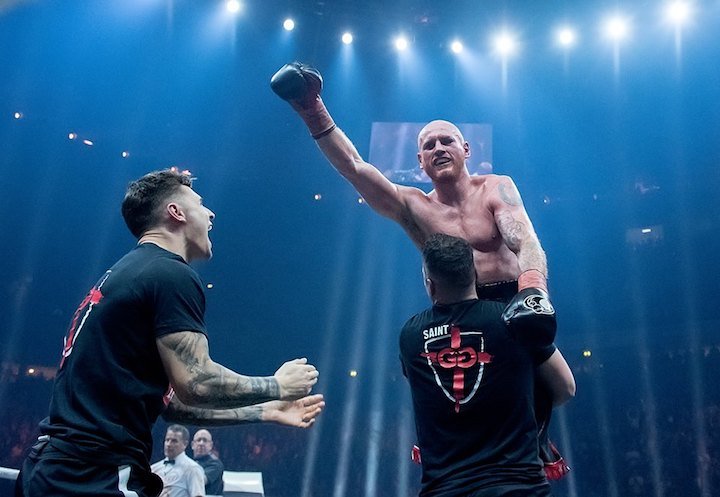 Moments ago, George Groves officially announced his retirement from the ring via a heartfelt message he posted on social media. Groves, the former WBA super-middleweight champion who, along with having a fine amateur career also featured in some of the biggest fights in British boxing over the past decade, walks away with a fine 28-4(20) ledger. The 30 year old was stopped in a tough fight with Callum Smith back in September of last year, and after much deep thought, “The Saint” has decided to call it a career.

Groves said in his statement that although he is still fit, healthy and is retiring at a young age and that there are still big fights out there for him, he is retiring so as to be able to spend time with his family. Groves also wrote how he does not in any way wish to be an “old” fighter who is retired by the sport due to suffering too many injuries. Groves, as he writes, is walking away on his own terms, while still on top (although he did lose his last fight.)

A pro since November of 2008, the Londoner faced many big names, including: Carl Froch (in two thrilling fights, the second of which attracted a whopping 80,000 paying fans to Wembley), DeGale (who Groves defeated via close decision, also beating the Olympic gold medal winner in an earlier amateur fight), Glen Johnson (a decision win), Badou Jack (a decision loss in a WBC super-middleweight title challenge), Fedor Chudinov (who Groves stopped to finally become world champion, this at the fourth attempt) and, in his final bout, Smith.

The two Froch fights, their build-up and aftermath, really did capture the imagination of the entire British public. In the first fight, Groves succeeded in getting under Froch’s skin, and in the opening round of the fight he sensationally dropped the iron-chinned champion, almost causing the big upset. Stopped in controversial fashion in the ninth-round, Groves and his fans complained bitterly that the stoppage was premature. A return fight was needed but this time Froch ended the rivalry in dominant fashion, KO’ing Groves in the eighth-round.

Groves was able to bounce back and, after losing a split decision to Jack, he battered Chudinov to a sixth-round defeat in what was a great performance. Groves was finally a world champion and managed two retentions – including a big win over Eubank Jr. in the semi-final of The World Boxing Super Series tournament – before losing in a mild upset to Smith.

A popular and exciting fighter who faced the best, fans everywhere are now wishing Groves a happy retirement.