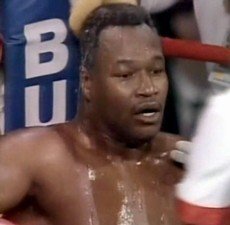 Between them, these two all-time greats compiled astonishing numbers: 145 wins, just 11 losses, and a staggering 112 KO’s – George Foreman and Larry Holmes – two of the greatest heavyweights of the 1970s, in fact of all-time. But in the opinion of some, there is something missing from the records of both men: they somehow managed to avoid fighting one another during their ’70s prime.

The the two former champs did actually come oh, so close to getting it on, however – in 1999.

At this time, with both greats well into their forties – in fact, in the case of “Big George,” who is almost a year older than Holmes, his fifties – pen was put to paper. The fight was all set for January 23rd of 1999, with Foreman guaranteed a $9 million payday, Holmes $4 million.

But with just days to go, and after both legends had embarked on a press tour to hype the intriguing match-up, Foreman bailed out when promoter Roger Levitt failed to pay George his promised advance. Basically, Levitt’s cheque bounced and so did the fight – right off the schedule. What to think of this? Is it a good thing the two heavyweight fossils never met, or was boxing history robbed of a fascinating fight between the two men who are today the last surviving contributors to a golden age for the heavyweight division?

Holmes, to this day bitter towards Foreman (perhaps due to jealousy) might well have jabbed, jabbed, jabbed his way to a decision win over the course of the ten-rounds the fight was set for. Or maybe Foreman, no slouch himself when it came to the art of throwing and landing a punishing and frequent left jab, would have pounded out a decision win himself. A KO, either way, was always going to be unlikely; due in some part to how slow and lacking in killer snap both veterans were, but also due to the fact that both heavyweight kings were blessed with the kind of granite chin any modern day heavy would kill for.

Maybe it would have been a slo-mo embarrassment, or maybe Holmes, then 65-6(44) and Foreman, then 76-5(68) would have reached back in time and produced one last prideful effort in giving us an eventful fight that saw one of the most enduring heavyweight grudges put to rest. Today, a fan of Foreman can make a great case for a win by “Big George,” while at the same time a Holmes fan can convincingly insist how “The Easton Assassin” would have walked away with the victory.

These days, Foreman could care less about this fight, or about any fight. George is as content as can be with how his career went; the losses he suffered included. But Holmes, still moved by some perceived lack of respect, would probably tell you how, in all honestly, he still has the urge to beat up on Foreman.

It might have happened in 1999, or maybe Foreman would have bashed Holmes around for thirty-minutes. Maybe this fight is better left to the ranks of Dream Fights, to the imagination of we fans.