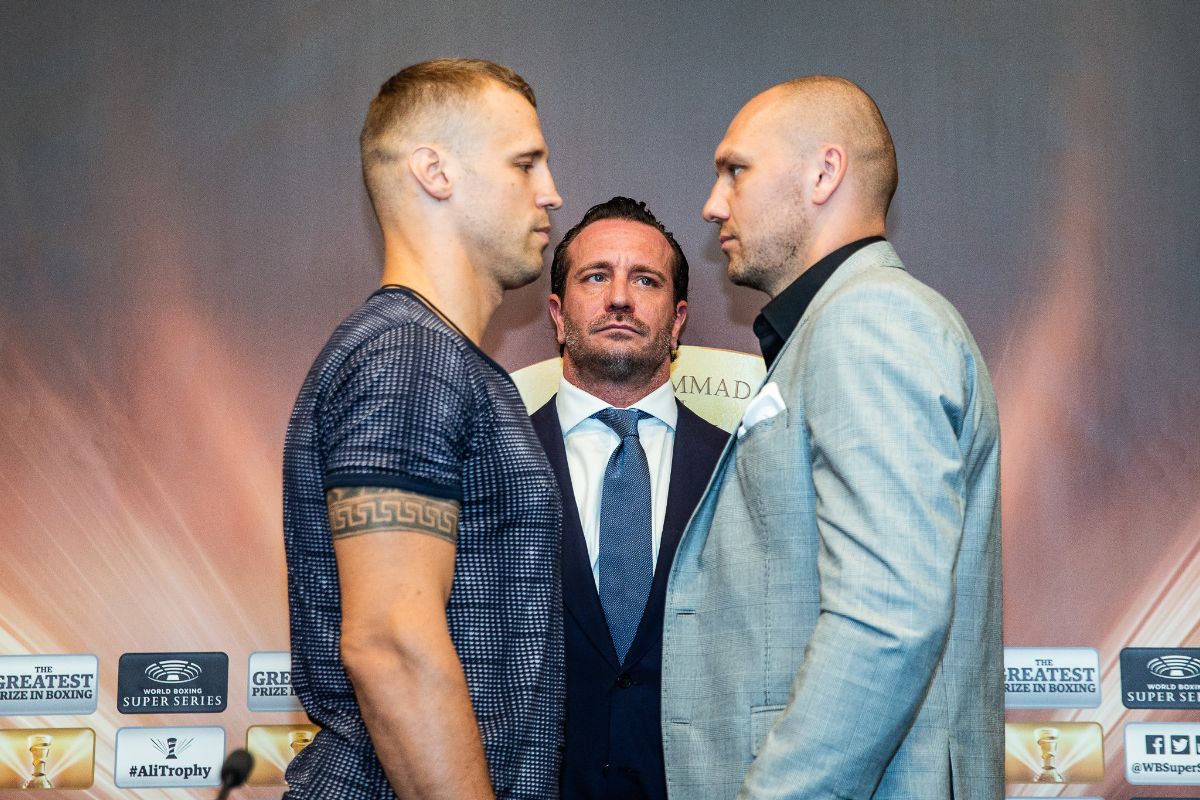 Glowacki at final press conference: “It is going to be a great war!”

Mairis Briedis (25-1, 18 KOs) and Krzysztof Glowacki (31-1, 19 KOs) are both ready for a spectacle when they meet in a WBSS Semi-Final for the WBC & WBO World Cruiserweight Championships on Saturday at the Arena Riga in Riga, Latvia.

“I am very happy to be here and I just can’t wait for Saturday,” said Glowacki, the WBO Champion. “I think it is going to be a great war and I am going to win.”

And the perspectives are likewise great, if he goes all the way and wins tournament, Glowacki acknowledged.

“It is something incredible to be able to get all the belts and win the Ali Trophy. That will be a dream coming true.”

Mairis Briedis is back at the Arena Riga on Saturday after 2018’s incredible Season 1 semi-final which saw Ukraine’s Aleksandr Usyk defeating the hometown hero after a close and thrilling encounter.

“I wouldn’t use the word ‘war’ about the fight like Krzysztof. It is a strong word, but I think it is going to be a beautiful and very watchable fight.

“It is really cool the fight is taking place in Latvia. If someone told me ten years ago we will have world championship fights here in Latvia, that we would have such magnitude events here in Latvia with championship belts on the line and the world’s greatest fighters here I wouldn’t believe them. So this is a dream come true for me.”

“It is great to be in Riga again,” said Kalle Sauerland, Comosa’s Chief Boxing Officer. “We know the atmosphere that this city can develop around fight week, we expect nothing less this week. I saw the images of the public training yesterday and it looked sensational.

“Now it’s the big boys, the cruiserweights are coming into play on Saturday, and they have something to live up to because the performances so far have been amazing in the super lightweight and bantamweight divisions of the World Boxing Super Series.

“Briedis-Glowacki is not only for the final, it is not only for big money, it is also for two world championships. It is something very special, it is sport at its highest level. It is the best versus best.

“Now it is down to the fighters to perform. We know that they are gladiators and their styles on Saturday will make for very exciting boxing. We can’t wait!”

Thursday Yunier Dorticos and Andrew Tabiti will meet at their press conference at 2pm at the Elektrum Olympic Center in Riga.

Dorticos: “You can write down, it is going to be Briedis-Dorticos in the Final!”

Mairis Briedis & Krzysztof Glowacki and Yunier Dorticos & Andrew Tabiti were all in confident mood at a jam-packed public workout in Riga ahead of their WBSS semi-finals on Saturday at the Arena Riga.

Thousands of fans were in attendance at Tuesday’s public workout at Domina Shopping in Latvia’s capital, and kids from a boxing school even showed up to support local hero Mairis Briedis chanting: “Mairis, Mairis, Mairis!” while shadow boxing.

The most outspoken of the four cruiserweights in the post-training interviews was Yunier ‘The KO Doctor’ Dorticos who made a bold prediction: “You can write in the paper, it is going to be Briedis-Dorticos in the Final!”

‘Beast’ Tabiti however had other plans for the coverage of Saturday’s event. “On Saturday the ‘Beast’ might end the fight early,” he said.

Glowacki was also confident of going all the way the way to final.

Briedis stressed that his semi-final is not just for two world titles, WBC and WBO, and a place in the final – but for a whole country’s pride.

“Thanks to everyone for showing up,” said Briedis. “On Saturday the world will be watching Latvia and I will do my very best to do us proud.”

Tickets for the hotly-anticipated semi-finals in Riga – Mairis Briedis vs Krzysztof Glowacki and Yunier Dorticos vs Andrew Tabiti – are on sale via bilesuserviss.lv