David Haye is predicting that Dillian Whyte will brush himself off and come back from his crushing 5th round knockout loss to 40-year-old Alexander Povetkin to avenge his loss in their rematch in November. Whyte (27-2, 18 KOs) didn’t look like the same fighter he normally is, according to Haye.

Whyte, 32, was trying to fight a technical boxing match against an Olympic gold medalist in Povetkin 36-2-1, 25 KOs), and he ultimately paid the price by getting knocked out with a left uppercut.

Haye thinks it’s possible for Whyte to forget about his loss and come back fresh for their second clash in November.

That’s when Whyte’s promoter Eddie Hearn wants him to fight because it’ll allow him to get ahead of the Anthony Joshua and Tyson Fury fights later this year. He still believes that Whyte will be allowed to fight Fury in early 2021.

Haye isn’t saying anything about what he believes will happen with Whyte if he loses the second fight against Povetkin. It might be time for Whyte to retire from the sport and take up another profession.

Dillian will avenge his loss to Povetkin

“If you look at the results the other night, the answer is ‘no,’ but obviously that fight [Whyte vs. Alexander Povetkin] has a bigger rematch happening soon, so obviously that takes it out of the way,” said David Haye to IFL TV when asked if Daniel Dubois is ready for Dillian.

“Last weekend showed that when you write somebody off like Povetkin, the impossible can happen. It just takes one shot with these big boys. Whyte, I believe, will rectify that loss.

“He was the third man. You have Fury, AJ, and Wilder. These are the top three. Behind that, arguably was Dillian Whyte. He was waiting 1000 days is mandatory, and he was the next guy to get his world title.

“That loss and him having a rematch clause, it shakes things up a little bit. That, in my mind, it leaves the door open for Dereck Chisora and Usyk. Once he beats Usyk, he’s the next guy.

“He’s the big name that just had a pay-per-view fight against the biggest and the best big man out there, pound-for-pound, the undisputed cruiserweight champion.

Haye can always hope that Whyte avenges his loss to Povetkin, but he has things working against him doing that. For one, Povetkin will be more confident now after knocking Whyte out.

With Hearn wanting the Povetkin-Whyte 2 fight to take place in November, that leaves Whyte with very little time to recover from his brutal knockout. If Whyte’s punch resistance isn’t the same as before, Povetkin could knock him out a lot easier than he did on August 22 at the Matchroom Fight Camp in Brentwood, Essex. 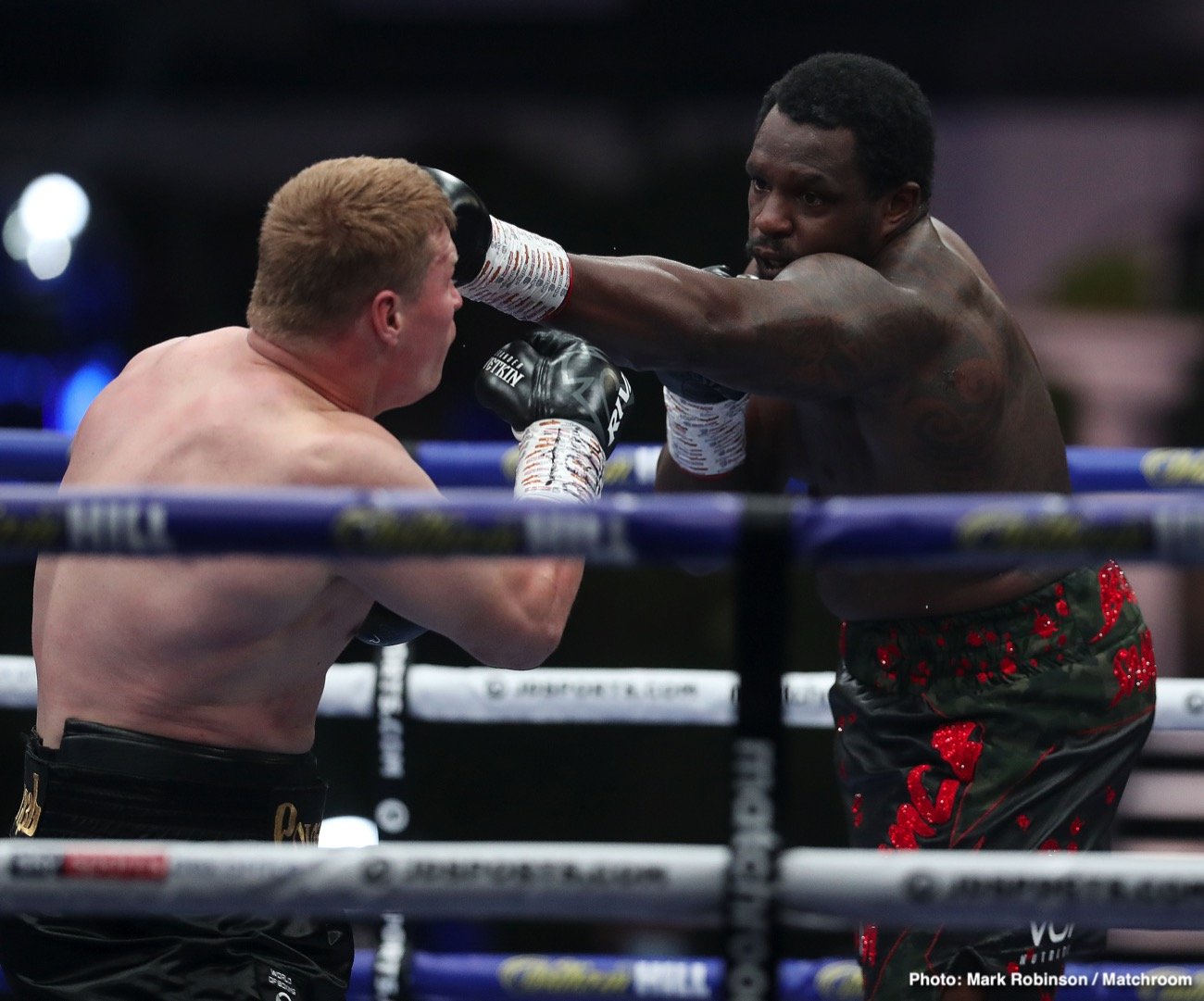 “It happens. He was in control, but he didn’t seem himself,” said Haye on Whyte, not looking like himself against Povetkin. “He didn’t look like his usual self. He wasn’t applying himself like he normally does.

Normally, he lets his hands go, and his weight shown. I don’t know what he was doing. He was kind of having a boxing match—a technical boxing match against someone that is an Olympic gold medalist.

“It’s a dangerous game because they can pull out a perfect shot at times, which is what he did. I’m sure he’ll look back at that fight and eradicate whatever the issue was going into the fight, and he’ll be back, I’m pretty sure,” Haye said on Whyte needing to fix the problems in his game.

Whyte was definitely himself, but he wasn’t ready to take a big uppercut from Povetkin. Where the punch was placed, Whyte couldn’t take it, and I don’t think he’ll be able to handle that type of shot in the rematch either.

Whyte was dominating the fight in the first four rounds, and it was clear after round four that Povetkin was in dire straights. If he had stayed out there much longer, Whyte would have knocked him out.

Dillian forget about his loss

“After that, it doesn’t help one’s confidence getting knocked out with one shot like that,” Haye continued about Whyte. “I’ve never seen that happens to him before. Even in Joshua’s fight, he was very fatigued, he had one arm, but he was in perfect physical condition. 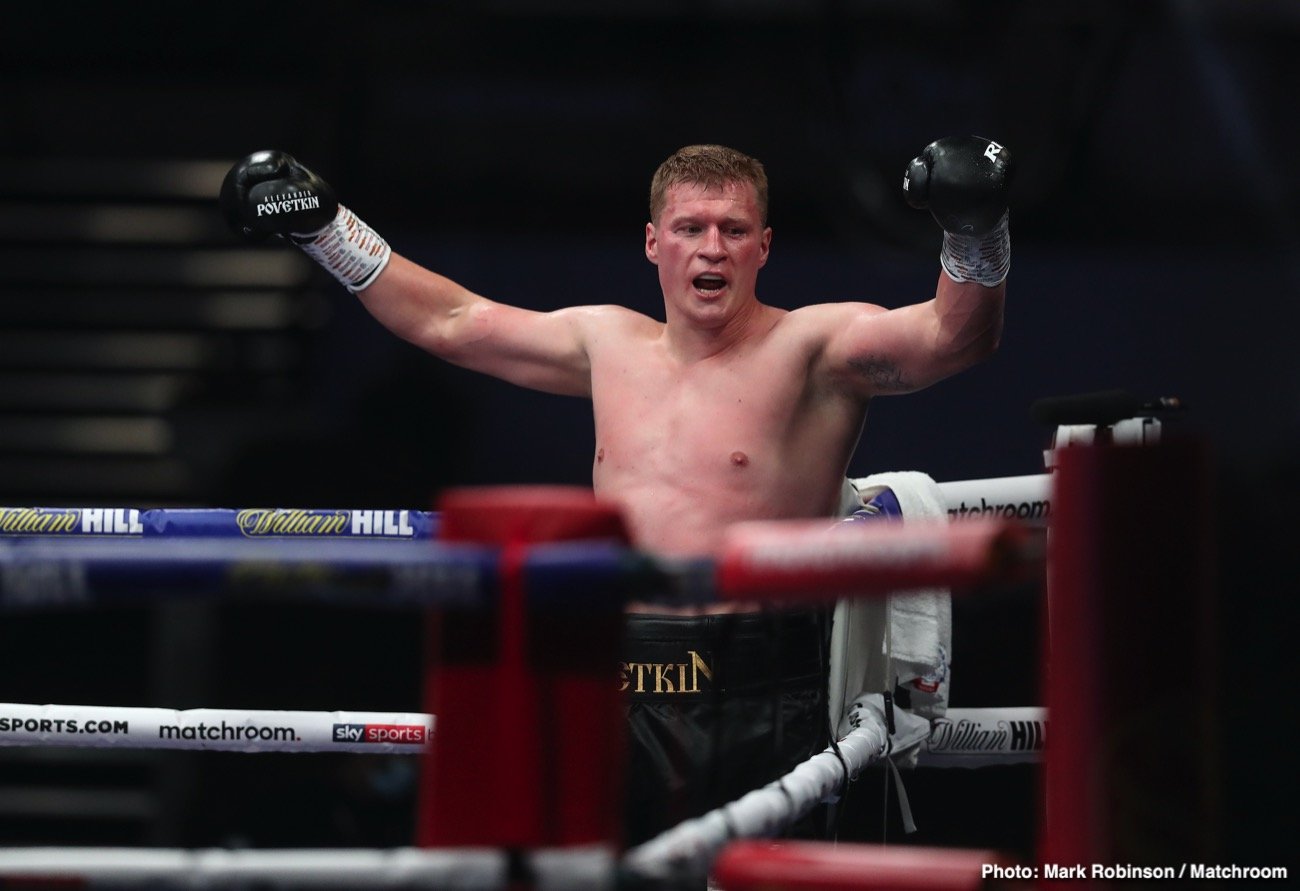 “He wasn’t out of breath, and he wasn’t tired. He just got cleaned out with one shot. It happens to some of the best. Lennox Lewis was taken out. What he did was he got the rematch, and he righted the wrongs, and nobody really thinks about it anymore.

“So that’s what Dillian has got do. He has to brush it off. Obviously, that’s going to be a stigma attached to him in the same way AJ lost to Ruiz. People are always going to bring that up, but as long as the fighter is focused on what he needs to, he’ll get back to where he wants to.

“But it’s a tough thing for a fighter to have to deal with, a high profile loss like that in such a spectacular fashion. It’s pretty tough, but he’s young in heavyweight terms. So he’ll come again,” David said.

It doesn’t matter that Whyte took less of a beating in his loss to Anthony Joshua in 2015. The problem is, Povetkin hits with tremendous power and he’ll be looking to KO Whyte using every trick in the book.

Usyk vs. Chisora being targeted for October

“We’re looking at all eventualities,” said Haye on what the situation is with the Usyk vs. Chisora fight. “You could be waiting for another year. You dn’t know. Dereck is training hard, sparring hard, and aiming towards for October.

“There’s no solid date, but he’s working for the middle of October. He’s ready for that. He’s trying to be as professional as humanely possible.

“He’s putting in some great sessions. So when that fight does get announced, when the date gets knocked in, there are no excuses. You’ll see the very best, Dereck Chisora. I’m pretty proud.

“I have no idea where the [Chisora vs. Usyk] fight will take place. It’s just when. I don’t care where the fight takes place as long as it takes place, and Dereck is in the best possible shape. I’m happy.

“As long as he’s where he needs to be because I know his style vs. Usyk’s style, if he gets it right, he can get a massive upset and put himself in that position for the big one,” said Haye. 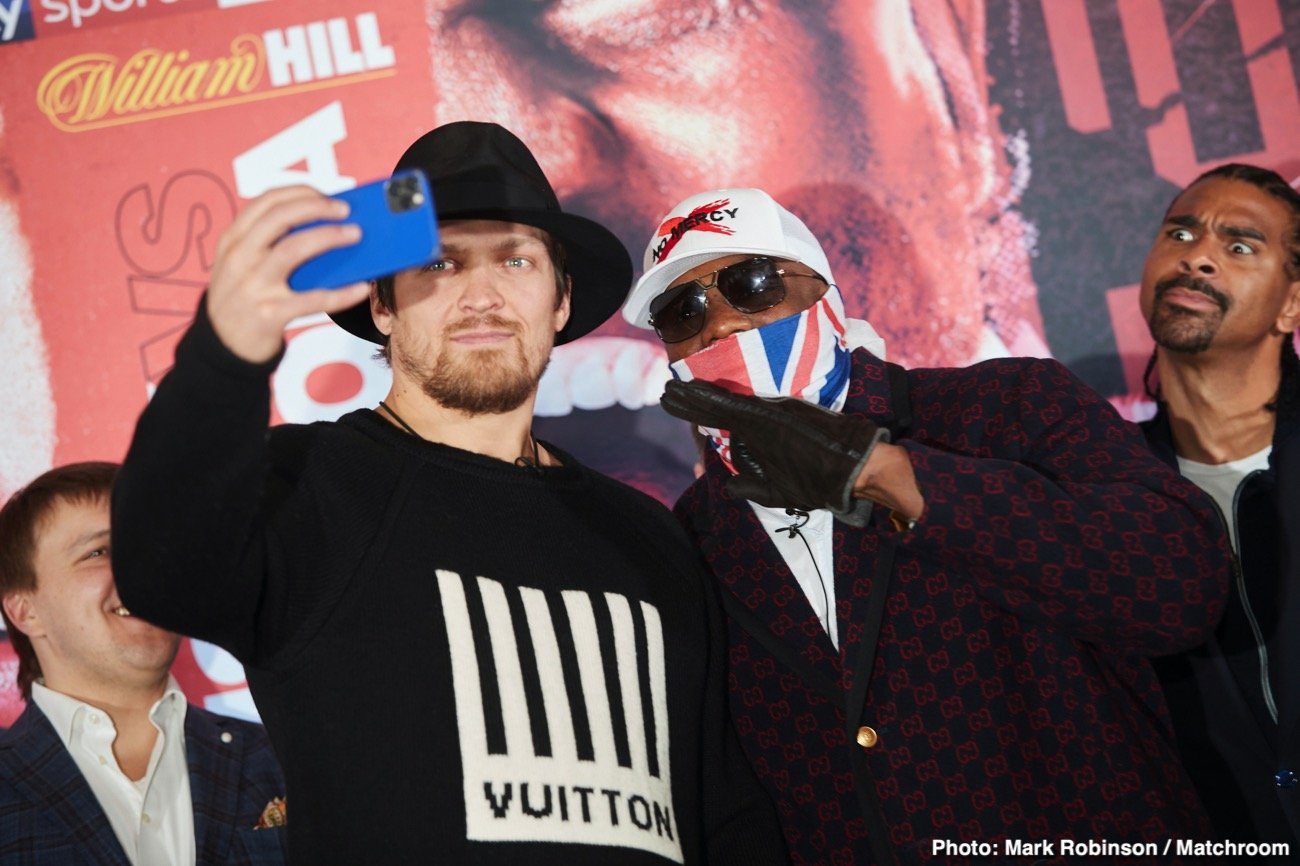 Chisora looked in good shape for his stoppage loss to David Haye and Tyson Fury, Dereck couldn’t get out of the way of the shots. The good news for Chisora is the fact that Usyk can’t punch, and he’ll be giving away around 30+ pounds in the match.

That would be a shame if the fight between Chisora and Usyk still doesn’t take place this year because boing fans want to see these two fight each other. The winner of the contest will be the WBO mandatory challenger to Joshua.