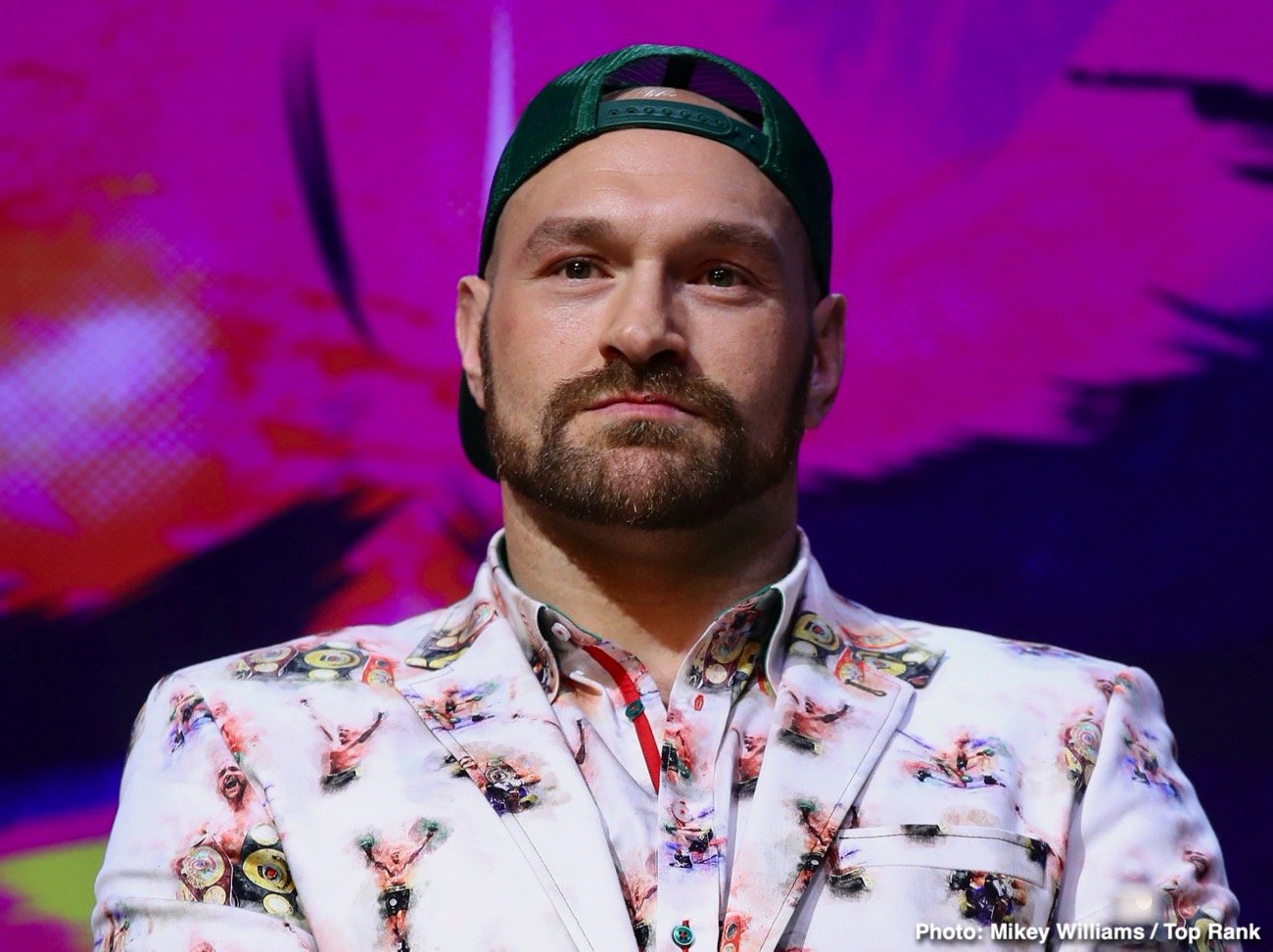 Tyson Fury devoted a portion of Monday’s press conference giving his 2-cents on Anthony Joshua’s recent win over Andy Ruiz Jr. last month, and he didn’t have much good to say about it.

Fury did a lot of running himself in beating Wladimir Klitschko five years ago to dethrone him as the IBF/IBO/WBA/WBO heavyweight champion in 2015, but fought the exact opposite against Deontay Wilder in 2018. In that fight, Fury stood his ground, and beating Wilder with his skills.

Fury will be fighting Wilder in a rematch net month on February 22 in Las Vegas. The fight will be televised on BT Sport Box Office in the UK, ESPN PPV and Fox PPV in the United States.

Fury NOT impressed with Joshua’s performance against Ruiz

“I didn’t think it was a great performance. I thought it was a hit-and-run s—house style, coward,” said Fury when asked about his thoughts on Joshua’s last performance against Ruiz in their rematch.

“Everytime he stood still landing, he rocked him to his boots,” said Fury on Ruiz hurting Joshua when he would stop moving. “It was what it was. He [Joshua] got the decision, and that was it. Fair play, on to the next one.

“Welcome to the club of winning,” said Fury in responding to Joshua criticizing his performance against Wladimir Klitschko from 2015. “That’s how we roll,” said Fury.

Read:  Eddie Hearn says Tyson Fury must beat the other top heavyweights to be #1

Joshua was heavily criticized by boxing fans for spoiling for 12 rounds, and fighting an ugly safety first style against Ruiz in their rematch. What made it worse though is the fact that the fight was sold on pay-per-view, and watched by millions of boxing fans worldwide.

With that many eyeballs watching the fight, Joshua owed it to the fans to make it a more entertaining fight than he did. Instead, he fought like he was thinking of himself, and trying the best he can to nick the rounds no matter how ugly.

It’s expected that Joshua will continue to fight using the Wladimir style for the remainder of his career due to his chin and stamina not being what they need to be. That’s obviously bad news for boxing fans that pay to see Joshua’s fights, because they’re not going to get much for their money in terms of entertainment.

Well, Joshua isn’t going to prove himself against Ruiz, because he already beat him. Joshua’s promoter Eddie Hearn is moving him forward with his career to defend his IBF and WBO heavyweight titles in 2020 against Kubrat Pulev and Oleksandr Usyk. Unfortunately, there is zero interest in a fight between AJ and Pulev, and he would be better off giving up the IBF strap to avoid wasting a fight.

Although Joshua talks about potentially giving up one of his titles or the sake of making bigger fights, he’s not expected to do that. In Joshua’s mind, the titles validate him as a fighter. They don’t obviously. The average boxing fan has no clue how many titles Joshua has, and they only care that he’s a champion.

“It’s not about sanctioning fees. I’m just not going to box for them anymore. The dumbbell belts,” said Fury on Monday. “I’ve got room for one more belt, the WBC belt, which I haven’t got. The rest of them I’m not interested. Not at all. No, no, no. I have no interest.

“I’ll fight Joshua with no belt, because it’s not about the belts. It’s about who’s the best in your era. I’m the best, and I haven’t got a belt. I’ve got this one, and it holds my trousers on. I’ve got the fake one, haven’t I? The fake belt that I made up,” said Fury in joking about how he refers to himself as the ‘Lineal heavyweight champion.’

Fury has the right idea in divorcing himself from the need to win the useless titles, which do nothing for fighters once they achieve popularity. The belts help the top fighters get the talented contenders to fight them, but other than that, they’re dead weight.

They’re not importance once a fighter builds a huge following like Fury. He has the right idea in giving himself a title by calling himself the ‘lineal champion,’ which has no sanctioning fee. He’s not required to fight whoever the governing bodies want him to.