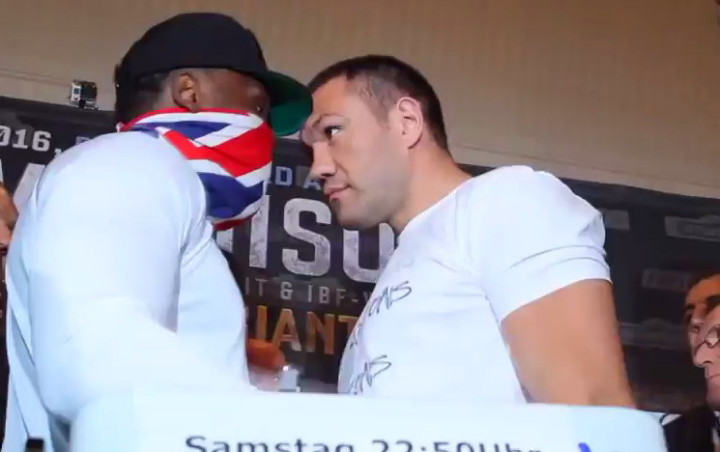 Dereck Chisora will likely earn himself a world title shot if he can defeat Kubrat Pulev in tomorrow’s European heavyweight title clash – possibly against IBF champ Anthony Joshua (Eddie Hearn says a victorious Chisora would be an option for Joshua). But can “Del Boy” become only the second man to defeat the tough, durable and experienced Pulev? One man who has his doubts is heavyweight ruler Tyson Fury.

Fury told Sky Sports he will be supporting Chisora, and that he may even go out to Hamburg to walk Chisora into the ring. Former bitter rivals – fighting twice, Fury wining both, the second fight by corner retirement stoppage – Fury now says he has “a little soft spot” for Chisora.

“I would love to see him win and I am thinking of going out to Hamburg,” Fury said. “I’d love to be there to support him and even walk into the ring with him. I’m just worried he’s not going to be able to outbox Pulev though. He’s a taller boxer while Chisora’s a short aggressor, so I’m not sure how he’s been training and how he’s going to be since the second fight against me. If I am honest I can’t see him doing it but I would be over the moon for him if he wins the European title and gets a crack at the world title. I have always said I’d love that trilogy with him but as I have said – and I am a man of my word – when I have beaten Wladimir Klitschko that will be it for me.”

There it is again: Fury stating he will retire after July9th. Fans do not believe him but Fury does sound convincing enough. As for tomorrow night’s fight, Chisora, 25-5(17) is the underdog and it will indeed be interesting to see how much he has left. Chisora took quite a steady beating from Fury in November of 2014 and though he has won five on the spin since then, Chisora has faced only so-so opposition, certainly no fighters anywhere close to the quality of Pulev.

Pulev has won two fights since being stopped by Klitschko, also in November of 2014, and also against reasonable but not dangerous opposition. The Bulgarian, who is 22-1(12) seems to be fresher and less worn than Chisora and a late stoppage win for him looks a good bet. Three British fighters have tough jobs tomorrow: Amir Khan of course, Anthony Crolla, who will meet Venezuelan puncher Ismael Barroso in defence of his WBA light-weight title, and Chisora.

Unfortunately for British boxing, a good case can be made for all three Brits losing tomorrow. Chisora will give it his all though, as will Khan and Crolla.