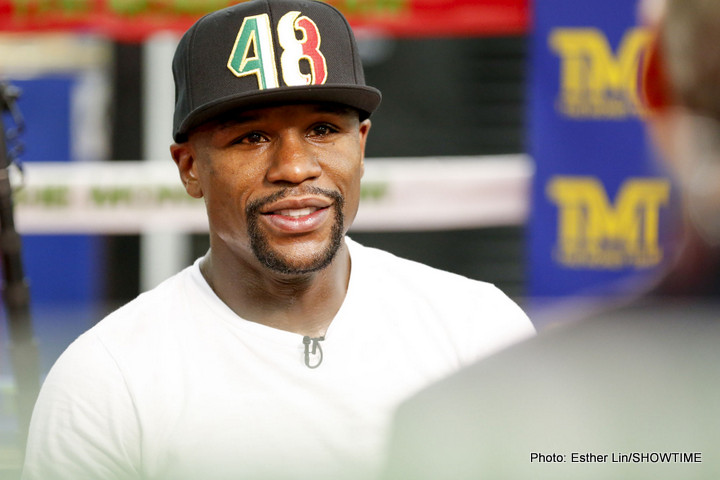 Floyd Mayweather is a happy man right now, a very happy man. Whether the glee “Money” is seemingly unable to hide is down to the enormous payday his upcoming fight with MMA star Conor McGregor will bag him, or whether, as Floyd claims, it’s down to “giving the people all around the world what they want,” is down to opinion.

But the 40 year old superstar gave his first official (if brief) interview on the August 26 “Super-Fight” yesterday. Speaking with BSO TV, the 49-0 all time great said his retirement came to an end simply because fans “demanded this fight.”

“McGregor is a tough competitor. People all around the world demanded this fight so I had to give them what they wanted to see,” Mayweather said. “They asked for this fight. I was in retirement, but they wanted me back and I’m back. Both parties are very happy [with the financial side of things]. He’s very happy, I’m very happy and I can’t wait.”

Did the fight fans of the world really demand this fight? The attention the crossover bout has already generated has been huge, so in an odd way, maybe Mayweather is right. Some excited people associated with the fight have even said they feel this clash can break the incredible pay-per-view numbers Mayweather’s “Fight of The Century” with Manny Pacquiao pulled in just over two years ago.

That fight as we all know was one big dud; let’s hope Mayweather-McGregor ends up being a genuine, competitive fight.

Floyd insists it will be:

“You’re supposed to stand by your man. Stand behind the fighter that you believe in,” Mayweather said in regards to the enormous fan support McGregor has going into this fight, this despite the fact that the Irishman will be having his first ever boxing match. “He’s a hell of a competitor.”

Who will be the fan favourite with the paying crowd on fight night in Las Vegas? Who will you be rooting for on August 26?