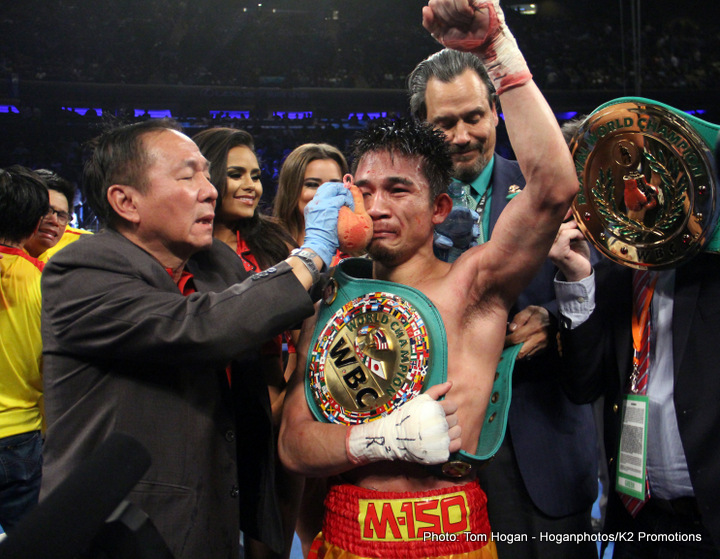 The Super Flyweight Division, long one of boxing’s most exciting, filled with many of the sports’ legendary superstars, will add another chapter into its annals of memorable evenings on Saturday, September 9.

WBC Super Flyweight World Champion SRISAKET SOR RUNGVISAI, (43-4-1, 39 KO’s), of Si Sa Ket, Thailand, defends his title against former champion “ROMAN “CHOCOLATITO” GONZALEZ (46-1-0, 38 KO’s), of Managua, Nicaragua, in a rematch of their epic battle this past March. The rematch headlines a tripleheader that will be televised live on HBO Boxing After Dark beginning at 10:15 p.m. ET/PT.

The venue location and ticket information will be announced shortly.

“We’re very excited to present this fantastic triple header featuring the top five super flyweights in the world,” said TOM LOEFFLER of K2 PROMOTIONS. “With the great history of memorable bouts in the super flyweight combined with the extraordinary talents of these six fighters in these two world championship fights along with the world title eliminator, the fans will truly be the winners of this event.”

“We have had great interest from numerous venues wishing to host this event, we are currently working through the locations and will have a site and ticket announcement shortly.”

“Thanks very much to Peter Nelson of HBO for his continued foresight and interest in the lighter weight divisions which has influenced this tremendous event with the top five fighters in the super flyweight division being showcased.”

“This all-action super flyweight tripleheader will have fight fans eagerly awaiting September 9th,” says Peter Nelson, Executive Vice President, HBO Sports. “We applaud all six fighters for their willingness to lace up their gloves to face the very best.”

“I would like to thank WBC, HBO, and K2 promotion for this opportunity,” said Srisaket Sor Rungvisai. “I’m honored to share the ring again and defend the WBC Super Flyweight Title against Roman Gonzalez. He is a legend and the best fighter I have faced.”

“I’m training hard to be the winner of this rematch. Boxing fans around the world will get to see another great fight between us, and I will win and take the WBC World Championship title back for everyone in Thailand.”

“I’m ready to go back into battle and reclaim by WBC Super Flyweight Championship from Sor Rungvisai on September 9,” said ‘Chocolatito’. “I know what I have to do to become victorious and with God’s help I will be champion once again.”

“As always thanks very much to Mr. Honda, K2 Promotions and HBO for this opportunity.”

On March 18, 2017, ‘Chocolatito’, universally recognized as The #1 Pound-for-Pound Fighter in the World and holder of the WBC Super Flyweight Title, battled Srisaket Sor Rungivisai in front of a massive crowd at ‘The Mecca of Boxing’, Madison Square Garden.

Despite being dropped in the first round, the valiant ‘Chocolatito’ battled back in a brutal war that included a tremendous amount of hard-hitting from both combatants along with a number of head butts due to the aggressive styles of the orthodox champion and southpaw challenger.

Sor Rungvisai was declared the winner by controversial majority decision, 114-112, 114-112 and 113-113 in a fight that many believe to be the leading candidate for this year’s “Fight of the Year.”

The World Boxing Council (WBC) ordered an immediate rematch so there would be no question who their champion would be.

Stated Naoya Inoue about his title defense and first bout in the United States, “It’s been my dream to fight in the United States and I’m very excited to be defending my title against Antonio Nieves on September 9. I look forward to putting on a great performance for the fans.”

“I’m very excited to face Naoya Inoue for the WBO Super Flyweight Title on September 9,” said Antonio Nieves. “This is my first world title opportunity and I’m very grateful to HBO, Tom Loeffler and Tim VanNewhouse for making this possible.”

The 24-year-old Inoue is among the most popular fighters in Asia, having already made five defenses of his WBO Super Flyweight Title he was awarded following his second round knockout of Omar Narvaez on December 30, 2014 in Tokyo, Japan.

Earning his nickname, “The Monster” from his heavy handed knockouts, Inoue is seeking to grow his fan base from the huge Asian community of U.S. based boxing fans.

Inoue kicked off his 2017 campaign with a third round stoppage of Ricardo Rodriguez on May 21 in Tokyo, Japan.

Fighting out of Cleveland, Ohio, Nieves will be looking to join the long history of world champions of Puerto Rican heritage. Undefeated through the first six years of his professional career, Nieves suffered his first loss very controversially, losing a 10-round split decision to Nikolai Potapov on March 10 in Detroit, Michigan.

Stated Carlos Cuadras, “I can’t wait to get back in the ring on September 9 against Juan Estrada. He’s a very tough fighter but I will be victorious and put on a show for the fans, then I want a fight with whoever is the champion ‘Chocolatito’ or Sor Rungvisai to get my belt back.”

“Carlos Cuadras is a great Champion and we will have a great fight but he is just the first step towards me becoming the best super flyweight in the world! See you September 9,” said Juan Francisco Estrada.

In a 2016 ‘Fight of the Year’ contender, former WBC Super Flyweight Champion Cuadras would lose for the first time in his eight-year career on September 10, 2016 by unanimous decision to Roman ‘Chocolatito’ Gonzalez. Fighting furiously over the course of the twelve epic rounds in front of a huge crowd at The Fabulous Forum, Cuadras would come up just short on the scorecards losing by unanimous decision.