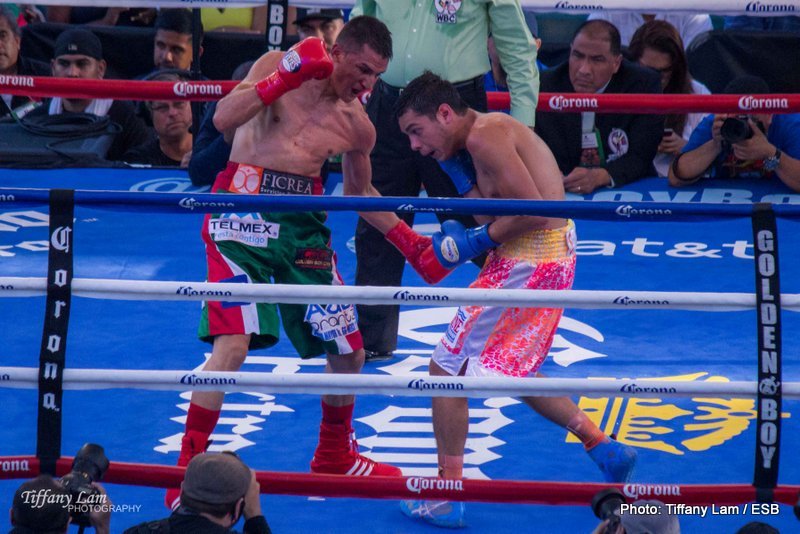 Another great night of boxing at the StubHub Center in Carson, California! After an entertaining undercard featuring Deontay Wilder, Jorge Linares and other notables, the tripleheader broadcast kicked off with Texas native Omar Figueroa defending his lightweight title against Daniel Estrada of Mexico City. It was an exciting opening to another solid tripleheader from Showtime Boxing, which was criticized for the one-sided Al Haymon showcase in Brooklyn they broadcast last week (topped off with the Garcia-Salka fiasco).

Figueroa started cautiously in the early going, attempting to move his head and responsibly. It didn’t last long. By the end of the first round both men were exchanging blows on the ropes. Figueroa stalked forward and seemed to do the better work, yet Estrada stood his ground and made his presence felt. A low blow in the third round seemed to really bother Omar, as he took a long break at the suggestion of referee Raul Caiz to recover.

It also seemed to piss him off because from that point on every punch was thrown with bad intentions. By the fifth round Estrada’s face was swelling and bleeding, yet he hung tough and never stopped trying to win.

At the very of the seventh round Estrada ate a flush shot and wobbled back to his corner; it looked like he might be ready to go. Yet in the eighth round the Mexican hung tough, caught Figueroa in the corner, and stunned his opponent with hard punches, opening a bad cut on his face. Suddenly the Texan fought his way out, threw his opponent into the corner, and landed his own combinations, driving the crowd nuts. In the ninth round a disgusting right hand dropped Estrada onto the canvas. Being the warrior he is, naturally he made it to his feet and tried to fight on. But the writing was on the wall as Figueroa smelled blood and went into kill mode, throwing over a dozen unanswered punches until Raul Caiz stepped in and called it off.