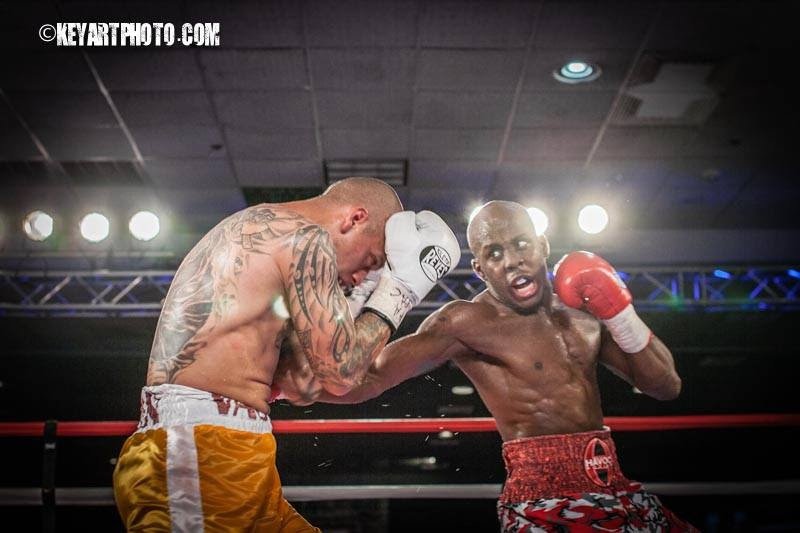 Farmer took the fight to Gonzalez from the opening bell and never let up as he outworked and out landed him throughout the bout.

Farmer worked the body extremely well, hit Gonzalez from several angles and moved well around the ring as he kept Gonzalez from using his power and from getting into any kind of rhythm. Gonzalez landed more often in the second half of the matchup and connected on several powerful combinations; however, Framer still beat him to the punch and landed the more effective shots.

He improved to 16-4, 3KOs and won for the ninth consecutive time. Gonzalez loss for the first time as a professional as he dropped to 14-1, 7KOs.

These bouts were presented by Golden Boy Promotions and Murphy’s Boxing Promotions at the House of Blues in Boston, Massachusetts. These bouts were broadcasted on USA Fox Sports 1. All the proceeds from this event went to the Walsh Memorial Fund for Boston Firefighter, Brian Walsh who died recently, so that his children can pursue their college ambitions.

Daniel Martz claimed the vacant North American Boxing Federation`s Heavyweight Title after Alex Santos` corner stopped the bout at the end of the third round because Santos was unable to continue due an ankle injury he suffered in the middle of the first round when he got tangled up with Martz.

Martz landed a series of combinations that sent Santos to the canvas, right after he got injured and the knockdown was more from Santos not being able to stand as opposed to Martz`s punches. Martz control the next two rounds as Santos was rendered ineffective since his movement was restricted to staying on the ropes. He tried to engage Martz in a brawl, but Martz was content on fighting from the outside with his jab.

He garnered the technical knockout and upped his record to 11-1, 8KOs while Santos suffered his first professional loss and fell to 13-1, 11KOs. Santos demonstrated a great deal of courage by fighting two and half rounds despite being in immense pain that caused him to hobble around the ring and grimace every time he moved or threw a punch. Hopefully when Santos is healthy they can get a rematch.

Jamie “Nuisance” Kavanagh garnered a fifth round technical knockout over Michael “Cold Blood” Clark curtsey of a powerful right hook that knockdown Clark and had him in a great deal of trouble, so referee, Stephen Clark stopped the one sided lightweight fight at 2:49. Kavanagh looked extremely good as he displayed great combinations, worked the body really well and out hustled Clark throughout the fight. He also cut Clark above the right eye in the fifth round that caused him to bleed. Kavanagh improved to 17-1, 8KOs and won for the second consecutive time. Clark dropped to 44-11, 18KOs.

Danny Kelly landed a devastating right hook on Eric Newell`s jaw that sent him to the canvas where he struggled to get up, so referee, Clark stopped the fight at 2:45 in the first round. Kelly, with the technical knockout victory in this heavyweight fight, kept his undefeated record intact at 6-0-1, 4KOs. Newell fell to 8-2-2, 5KOs.

Mark ” Italian Bazooka” DeLuca dominated Dustin Caplinger as he pummeled him around the ring in the first round, constantly landing powerful combinations that backed up Caplinger and caused him to constantly cover up. DeLuca turned up the offensive pressure in the next round, as he scored two consecutive knockouts from a series of lethal combinations that had Caplinger in a great deal of pain. The referee stopped the super middleweight bout at 1:43 in the second round after Caplinger was extremely slow to get up from the last knockdown. DeLuca, with the knockout victory, upped his perfect record to 10-0, 7KOs while Caplinger dropped to 2-5, 1KO. This was DeLuca`s second bout this year after being out the sport for the last four years.

Gary “Spike” O` Sullivan won an entertaining action packed super middleweight bout against Jose Medina by landing the more powerful and numerous punches en route to a six round majority decision with two scorecards, 59-55 and 60-54 in his favor and one scorecard, 57-57. O` Sullivan improved to 17-110KOs while Medina fell to 18-15, 7KOs.

Lamont Roach, Jr. made quick work of Miguel Rodriquez as he dominated the first round of their lightweight bout before the referee halted the action at the end of the round due to an injury that Rodriquez sustained. Roach, Jr. remained undefeated, 2-0, 1KO while Rodriquez dropped to 6-4, 3KOs. Roach, Jr. displayed fast and effective combinations that landed whenever he wanted.