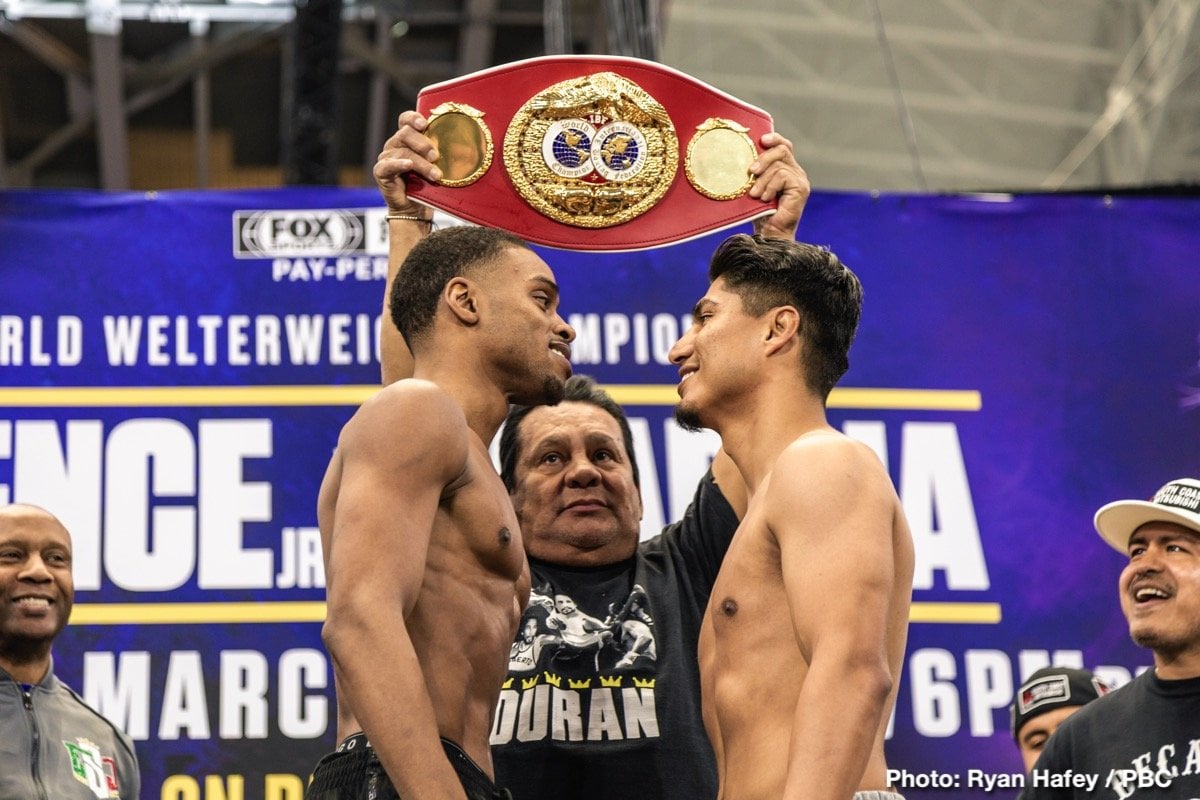 An old adage has it that “a great big man will always defeat a great little man”. The world of Boxing has seen a few talents that have stretched this logic to the brink, but rarely has the adage been proven untrue. Tonight, we revisit this position as the sports “boogeyman”, Errol Spence Jr. (24-0, 21KO’s) takes on four division world Champion, Mikey Garcia (39-0, 30KO’s). Fans, media, and all in between see tonight’s showdown as a potential landslide for Errol Spence Jr., but should they? As we prepare for this epic clash, we take a closer look at Keys to Victory, Four to Explore, and an Official Prediction: 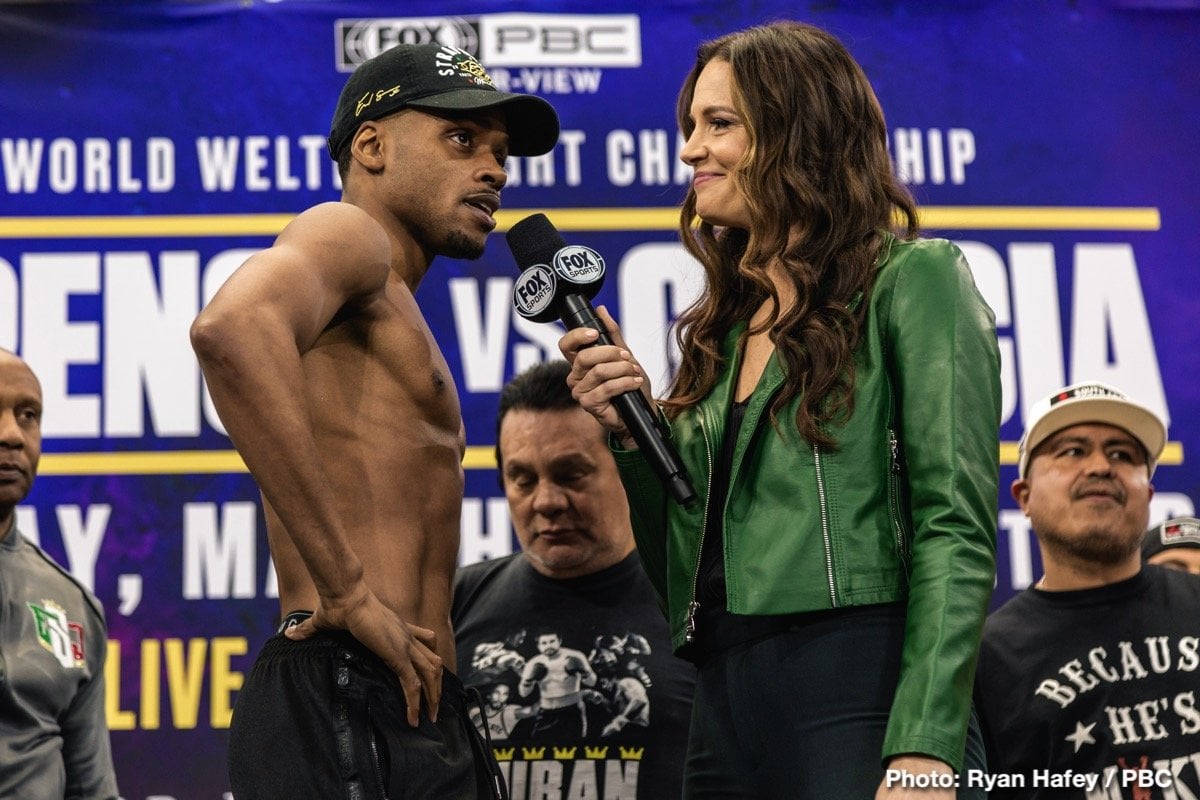 For Errol Spence Jr., the Keys to Victory are quite simple. Being the bigger, stronger man in the ring, naturally he’ll want to impose his greater attributes from the start. The laser jab he shoots is very difficult to counter. Spence will need to start with that jab to set the distance. He has a penchant for coming over the right jab with a thunderous left. Before pulling that ‘card’, he’ll need to be patient behind the jab long enough to frustrate Mikey. When Mikey begins to over commit, that’s when he should begin his assault (body and bombs). Spence doesn’t need to do anything outside of his typical strategy to control the action. If he can remain calm and execute, it’s his fight to lose. 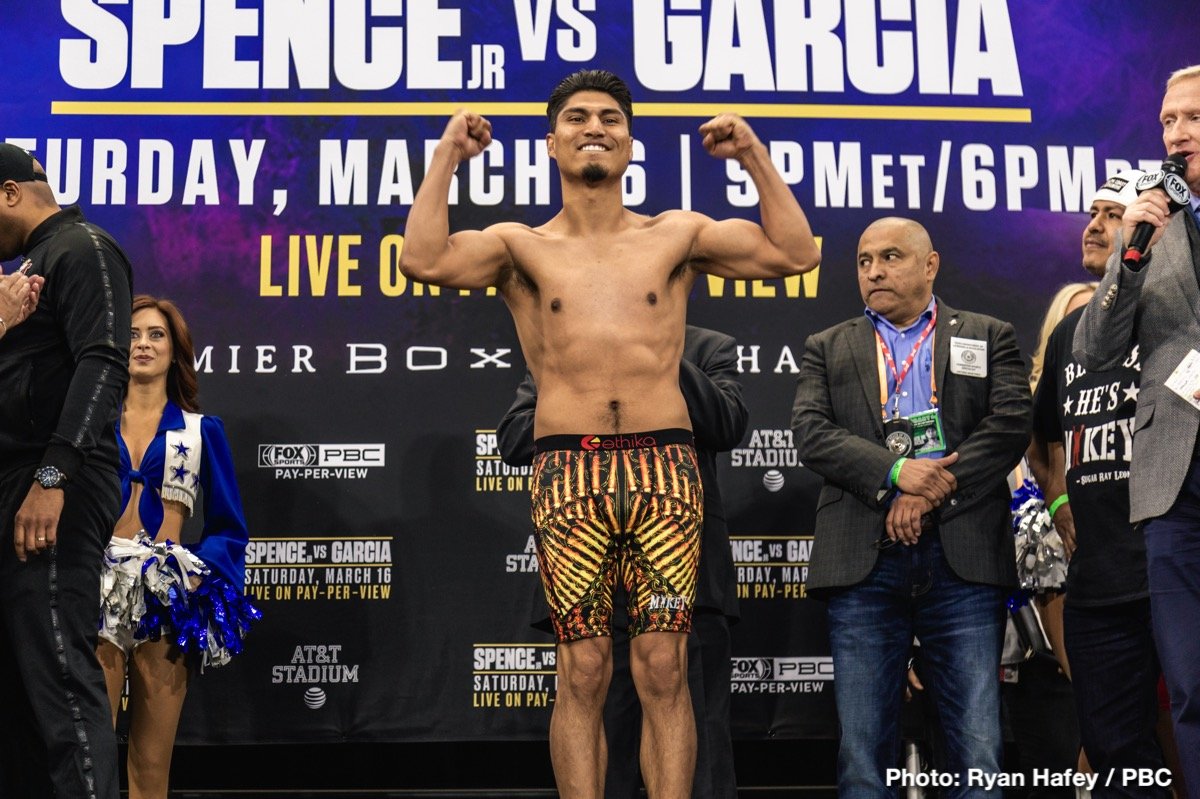 The key for Garcia will be patience. He can expect an uphill battle as he tries to measure speed, distance, strength, and power. Trouble for him is that knowing a flash knockdown is highly probable, he won’t have the luxury of dropping too many early rounds as he figures it all out. Garcia’s counter-punching skills and footwork are highly underrated. Both will need to be in optimal form for him to have any type of shot. The best thing Garcia can do is try to land some heat early, but play it safe enough to get into the deep rounds. If he can win a few rounds early to shift the narrative in the minds of the judges and avoid knockdowns, he can indeed find a path to a points victory. 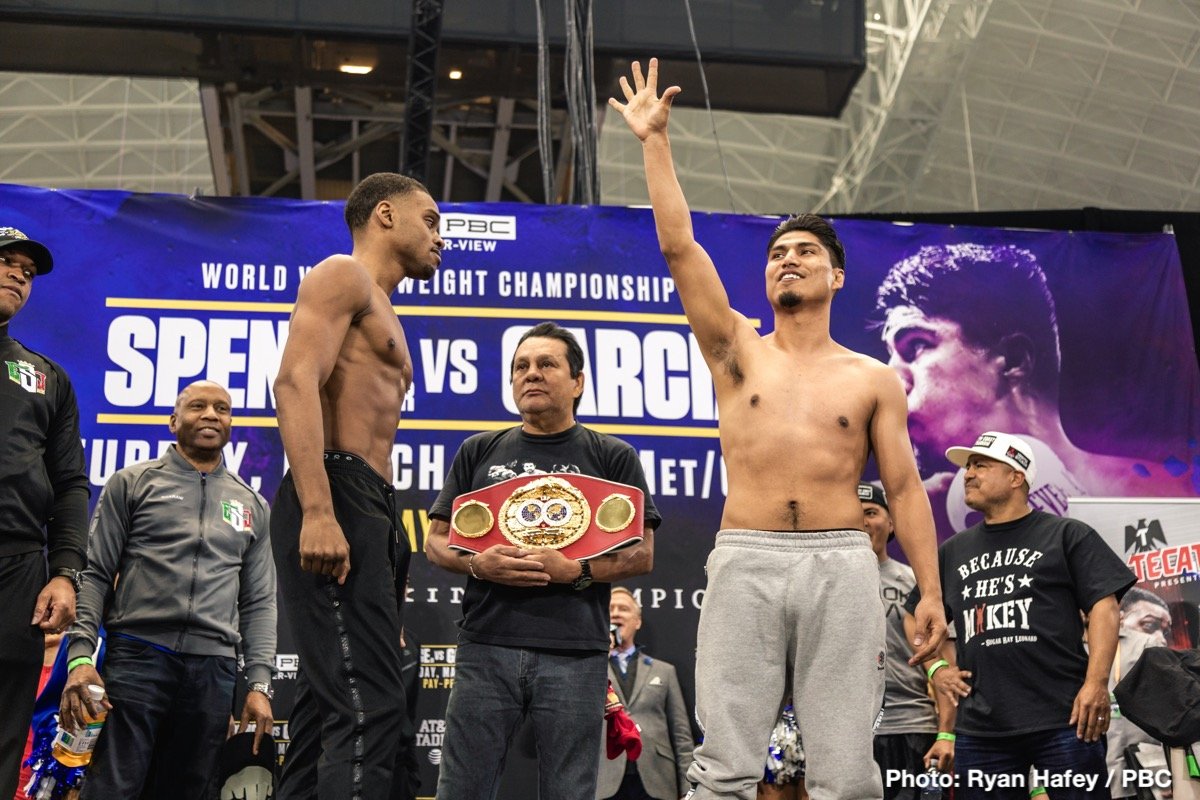 Youth or Experience? – Errol Spence Jr. is naturally athletic and incredibly gifted as an athlete. He’ll also enter the ring as the younger fighter. But how much of that truly plays a role in the way the fight plays out at this level? Few seem to note the fact that Garcia has 118 more rounds and 15 more fights as a pro. Adding to this stat is the fact that Spence has only been a World Champion for less than two years, while Garcia has had a strap around his waist for the past six years. Although Garcia will have to come up in weight, logic argues that Spence is going up in talent. How does this reconcile when the bell finally rings? #StayTuned

Right or Left?: – Anytime you have an orthodox fighter against a southpaw there’s a high probability of impact and accidents (headbutts, knees knocking, etc). When you get beyond the potential mishaps, the true battle of a southpaw and orthodox fighter comes down to timing. Does the awkward southpaw angle land flush first? Or does the lethal right kiss him good night? The only time we’ve seen Spence hurt in the past was when an orthodox fighter with solid counter-punching skills connected (with a right) while counter-punching. A high IQ guy opponent like Garcia can land his right all night long, but ONLY if he has the heart to stand in the pocket and punch with him. Does he?

‘Absentee’ Ballot: – Earlier we touched on the fact that Garcia will enter the ring with much greater experience than Spence. One reason for that is the fact that Spence hasn’t been a very active fighter. From the beginning of 2017 to current, Spence has only fought three times (in 27 months). Between those three fights were an 8 month lay off, a 5 month lay off, and a 9 month lay off. For a 29 year old fighter at the peak of his career who doesn’t have the toughest resume, one has to wonder, regardless of his physical appearance, will his mind be sharp enough to out-think a skilled veteran with incredible ring savvy? Very tough to say! #StayTuned

The Mayweather Mantra: – One of Floyd Mayweather’s most underrated skills was his ability – as a smaller fighter – to understand how and when to go for the kill! Against bigger fighters like Corrales, he landed powershots early, but he knew he had to keep chipping away before going in for the juggler and either punching himself out or getting caught! Garcia will have to emulate this skill to the tee if he wants a true victory. A well placed shot may stun Spence, but a decision to go in for the kill too quickly could result in him taking a shot that he can’t handle. Can Mikey execute with this level of precision and patience? The best answer is that he’ll have to, as anything less will fail the test! 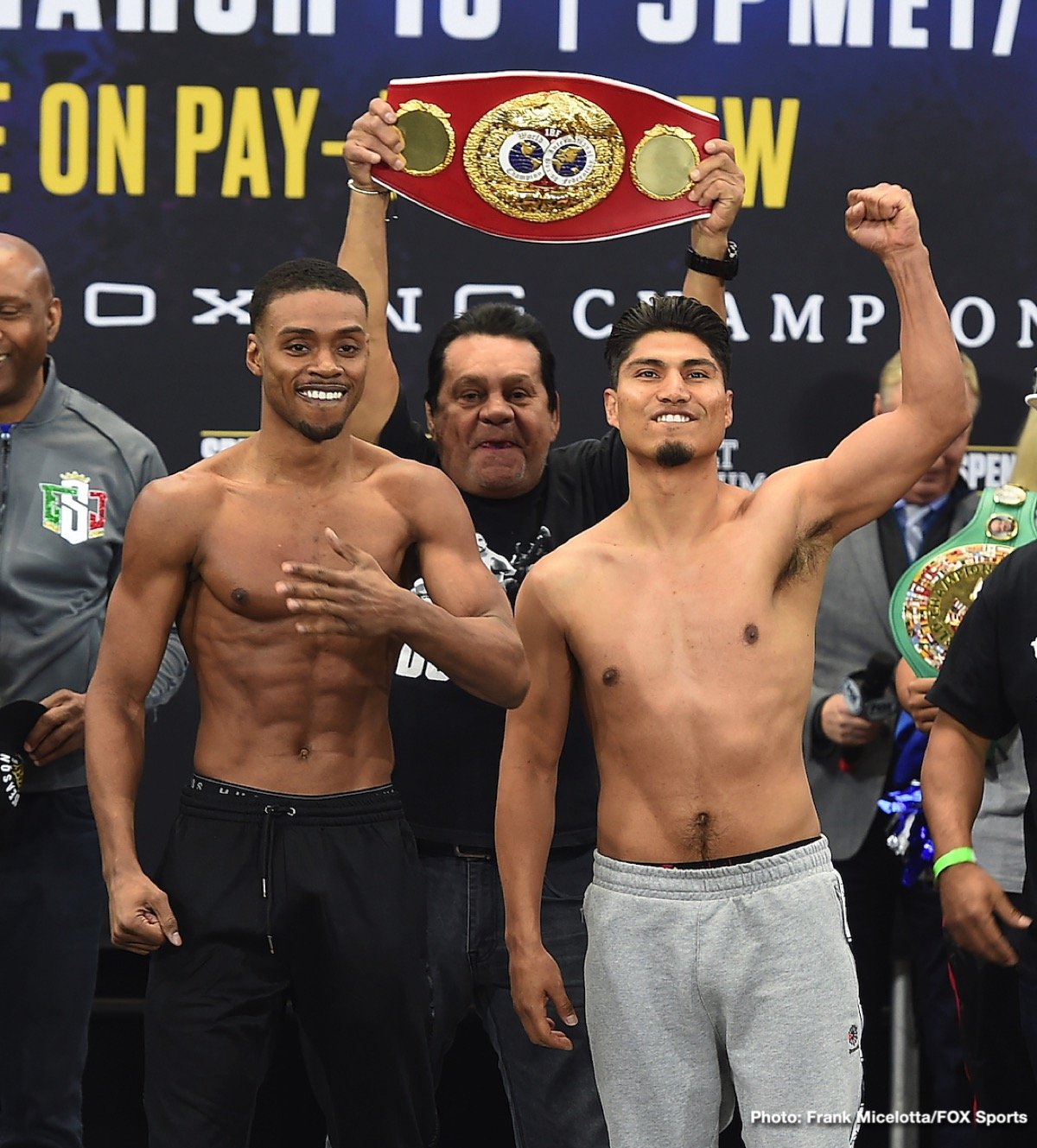 When the bell rings and the smoke clears, fans can expect a much more competitive fight than most seem to acknowledge. Mikey Garcia comes from a family lineage known to produce strong, determined individuals who don’t take “NO” for an answer. To watch him fight is to see the strength of that Mexican bloodline in its purest form. To adequately comprehend how solid Garcia is, one has to look no further than the fact that this is the very talent that defeated a very durable Orlando Salido two whole fights prior to him soundly defeating Vasily Lomachenko! Lomachenko is no Spence, but stylistically, he’s as difficult to decipher as any other, which says a ton!

Spence has made it clear that he plans to come out aggressive with plans to end the night early. Does that ‘blind pursuit’ impact his ability to execute? Does the bigger man use a level of aggression that ushers the wind out of him before he can use it to sail to victory? Smart money on this fight says NO! It points to a clear and decisive victory for the bigger man with quite a large margin for error. Unfortunately for those looking to drop duckets in the bucket, Garcia didn’t get the memo! Expect a very competitive fight from the first bell on, but eventually, a battle of attrition will end the mission! 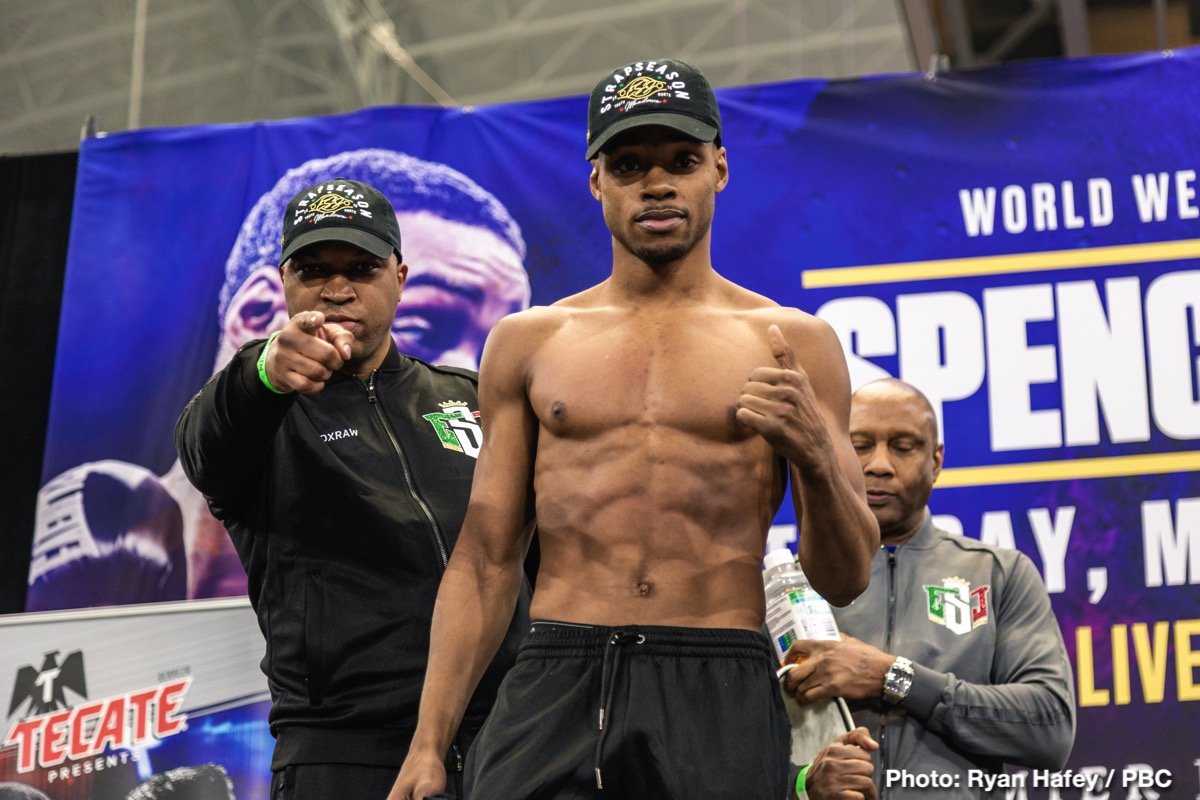