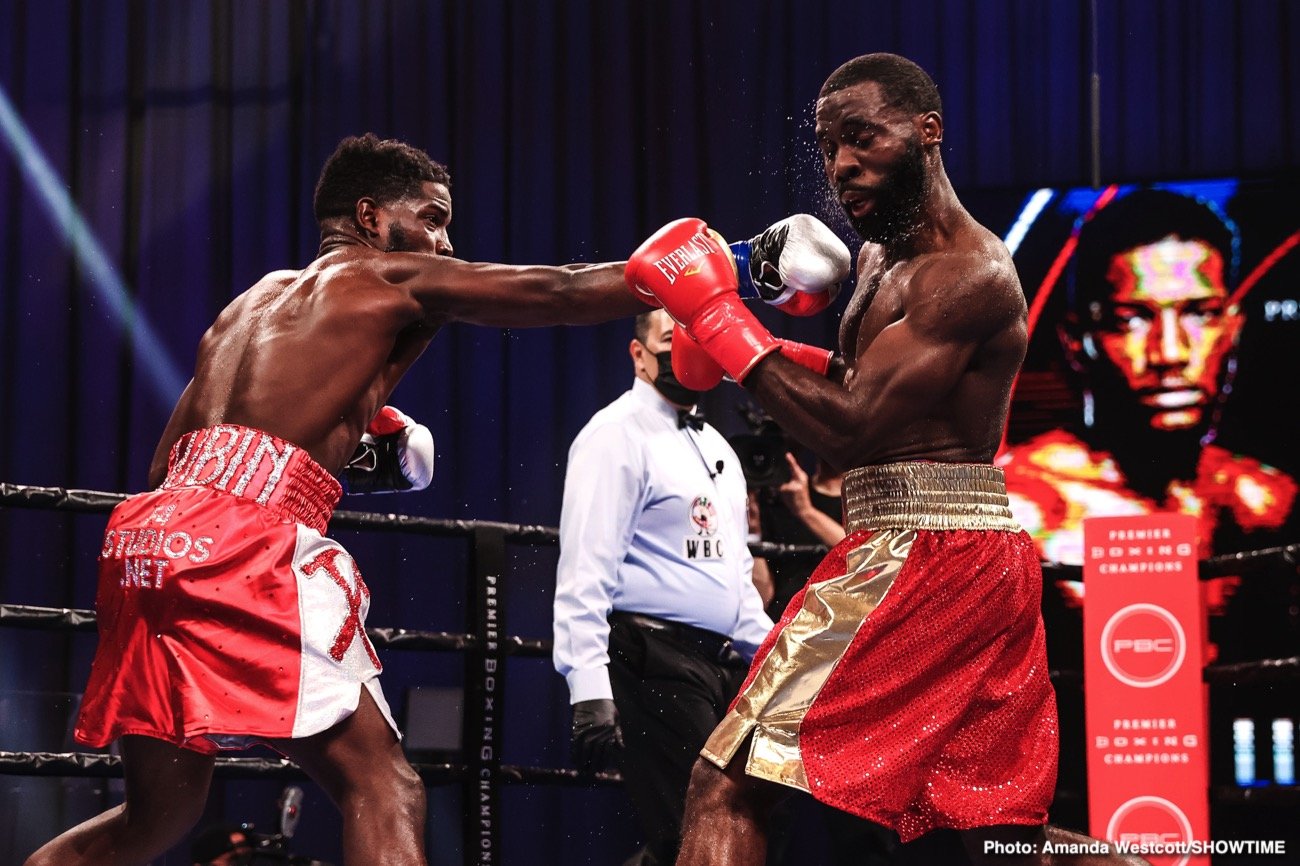 Erickson “The Hammer” Lubin out-classed Terrell Gausha in a WBC Super Welterweight Title Eliminator to set up a matchup with the winner of the Jermell Charlo vs. Jeison Rosario unification bout, part of next week’s CHARLO DOUBLEHEADER on SHOWTIME PPV. Lubin won via unanimous decision (115-113, 116-112, 118-110) in the main event of an exciting night of boxing live on SHOWTIME Saturday night from Mohegan Sun Arena in Uncasville, Conn., in an event presented by Premier Boxing Champions.

After a slow start to the SHOWTIME BOXING: SPECIAL EDITION® tripleheader main event, the 24-year-old Lubin (23-1, 16 KOs) did enough to win after a more action-packed fight broke out in the eighth round. Lubin, who was wobbled in the tenth round, pressed to close the show in the final round against a game Gausha, who refused to go down. Orlando’s Lubin landed an average of 12 out of 48 punches per round to 9 of 40 for Gausha (21-2-1, 10 KOs), and landed 47 percent of his power punches in the fight.

If Charlo is victorious in next week’s unification bout, Lubin will get his much-desired rematch of his only career loss, a devastating one-punch knockout in October 2017.

“I definitely made a statement,” said Lubin, who is trained by Kevin Cunningham. “I beat one of the top guys in the division, and that’s always a statement. I feel like I beat one of the top 154 pounders and I’m going to keep doing that. I’m going to stay in the gym and keep getting better. I know I hurt him in the last round. I was trying to get him out of there, but still be cautious. He was game. He’s an Olympian with good experience, so I didn’t want to get too wild.

“I think Jermell Charlo is going to come out on top against Jeison Rosario. I’m ready for a rematch if he can take care of business like I did. I changed up a lot since the first fight. I have a master trainer in my corner in Kevin Cunningham, along with my longtime trainer Jason Galarza. I’m just all around a better fighter since the first time we fought.”

Nyambayar dropped Breedy twice in the opening two rounds, once with his right hand and once with his left, but the gutsy Breedy climbed his way back into the fight after the early setbacks. Breedy was the busier fighter, throwing 62 punches per round compared to 47 for Nyambayar. “King Tug” landed the harder punches and connected on 51 percent of his power punches in the fight.

“It was a tough fight,” said the 28-year-old Nyambayar. “I have a lot of respect for Breedy. He’s a great boxer. I thought I won the fight and did well to get the knockdowns early. I thought I got the job done and I’m ready for the next step. I knew it was a close fight, but I wasn’t thinking about the score. I was surprised it was a split decision, but I thought I did enough to get the win.”

In the opening bout of the telecast, Philadelphia’s welterweight phenom Jaron Ennis (26-0, 24 KOs) continued his rapid ascent up the 147-pound charts by recording his 16th straight KO, this time against durable veteran Juan Carlos Abreu (23-6-1, 21 KOs), who had never been stopped before in his career.

“I was in there having my fun, then my dad said to stop playing with him, and that it’s time to take him out, so that’s what I did,” said Ennis, who goes by the nickname “Boots”. “I know he’s fought some tough guys in the past. Compare what I did to what they did. It shows the different skill level and attributes that I have. I made a statement tonight and stopped someone who’s never been stopped. Bring on the top 10 and top five guys or title eliminators. I’m coming for the championship next year.”

The switch-hitting Ennis landed his first meaningful punch in the fifth round, sending Abreu to the canvas with a vicious right-handed uppercut. Abreu beat the referee’s count and survived the round, but the end was imminent. In the next round, the 23-year-old Ennis knocked Abreu down for the sixth and seventh times of his career, forcing referee John Callas to stop the bout at 1:06 of round six. Ennis, who was pushed into the sixth round for just the third time of his career, now has 16 knockdowns in his last seven bouts.

Saturday’s fights were presented by Premier Boxing Champions and promoted by TGB Promotions. The Ennis vs. Abreu bout was promoted in association with D & D Boxing.