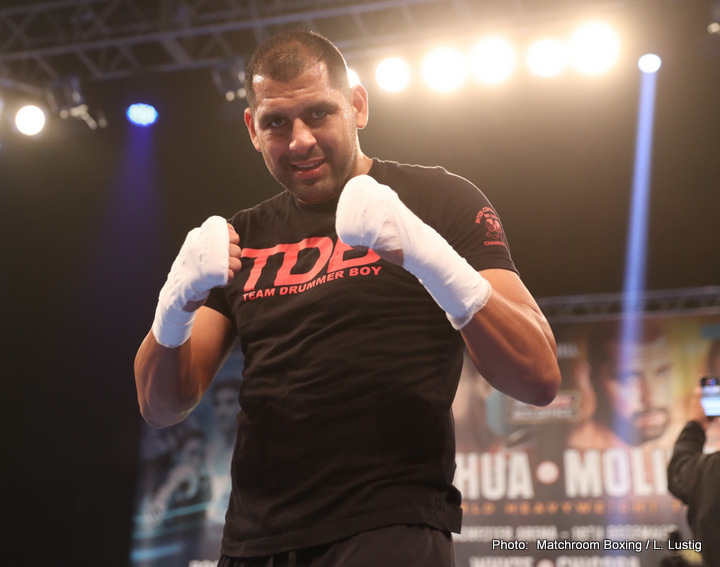 Back in April of 2016, heavyweight contender Eric Molina travelled to Poland to fight local hero and former two-weight world champ Tomasz Adamek. Just under ten rounds later, “Drummer Boy” Molina had pulled off the biggest win of his boxing career – and with the TKO, a shot at IBF heavyweight champ Anthony Joshua.

Now, having come up short in two of his last three fights – being stopped inside three-rounds by AJ in December of 2016 and being corner retired after eight in his tussle with Dominic Breazeale this past November – 35 year old Molina, 26-5(19) is getting his bags packed for what he hopes will be another productive, career-reviving night in Poland.

Molina, who has the experience of having been in with both current WBA/IBF champ Joshua and reigning WBC boss Deontay Wilder, will face giant Mariusz Wach on May 25 in Warsaw. This is no big fight, yet it is very much a must-win fight for both men, and it just might prove to be a highly entertaining slugfest. Wach, three years the older man, is also coming off a loss, a ninth-round stoppage defeat at the hands of Jarrell Miller, also in November. At 33-3(17), the 6’8” Wach is still in possession of a nice-looking pro ledger and he has done reasonably well just lately (the loss to “Big Baby” aside).

Back in March of last year, Wach picked up a useful points win over Erkan Teper and even in the fight with Miller he did okay before the finish, even making the Brooklyn man look quite average at times. How much has Wach got left, and how much has Molina got left? Wach was an unbeaten prospect when he lost in a brave bid to dethrone Wladimir Klitschko in 2012, losing a near shut-out UD over 12, while Molina had lost two fights, including his pro debut, before he made his first run at a world title, where he surprised many with his spirited effort against Wilder in 2015; eventually being halted in the ninth-round.

Who knows what to expect from Wach-Molina. Both men can punch, yet both men can also produce quite lumbering performances. It could be, though, that the respective styles of the two big men equates into a fan-friendly battle. Neither man is known for a slick defence, put it that way. This one could be a bombs away, who wants it most, who has most left in the tank, war.

The forthcoming fight has already made quite a splash in Poland. It seems we can almost guarantee a KO here, one way or the other.