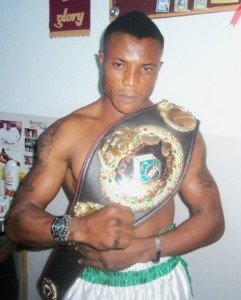 Still counting the gains and experience of challenging for the world title against Robert Stieglitz in Germany on October 19 last year, albeit unsuccessfully in a bid for the WBO world title, Ghana based Nigerian Super Middleweight, Isaac Ekpo has boldly declared his readiness to fight all of the top boxers in that division globally.

Ahead of his return to the ring on May 3 for the WBO Africa Super Middleweight belt, Eastsideboxing.com caught up with the former world title challenger at the Attoh Quarshie gym where he trains in Accra.
Ekpo, a stable mate of former world champion, Joshua Clottey was confident in his assertion that he is primed up for the big boys of the Super Middleweight division. Asked who he will like to fight, Ekpo replied that his dream fight will be against former WBC Super Middleweight champion, Julio Cesar Chavez Jnr.

Asked why he is not targeting James Degeale, Carl Froch or Anthony Abrahams since they are fights that could interest the European boxing market, Isaac Ekpo was quick to respond “they know where to find me, if they are ready they should bring it on.”

Ekpo was also willing to share his opinion on the epic Carl Froch versus George Groves rematch on May 31, asserting that Groves had a chance in the first fight that he didn’t take and things will be far difficult for him in the rematch.

“Groves was in with one of the elites in the Super Middleweight division, he controlled two-thirds of the fight but where it really mattered in the championship rounds, he began to fade and that’s what caused his defeat,” Ekpo explained.

The Nigerian slugger added: “It will be difficult for him to beat Carl Froch because Froch at this point of his career has gained much experience and is very hard to beat. It will be a close fight but I fancy Carl Froch to nick it.”