According to Hearn, WBC heavyweight champion Fury (32-0-1, 23 KOs) has said he won’t fight for the IBF title unless he’s paid back the money he paid to them for the sanctioning fee years ago.

Hearn represents Filip Hrgovic, the mandatory for the IBF belt, and he wants his title shot next against IBF/WBA/WBO champion Usyk.

As a result, Hearn expects the IBF title won’t be at stake when Fury faces Usyk (20-0, 13 KOs) early next year. He believes the fight will take place, albeit without the IBF title.

It probably won’t bother Fury too much that he won’t get the opportunity to fight for the undisputed because he seems to be in a phase of his career where he’s more interested in the prize money than capturing belts.

“Probably,” said Eddie Hearn to iFL TV when asked if Tyson Fury vs. Oleksandr Usyk will happen next. “We’ve heard some really interesting things from Fury this week. 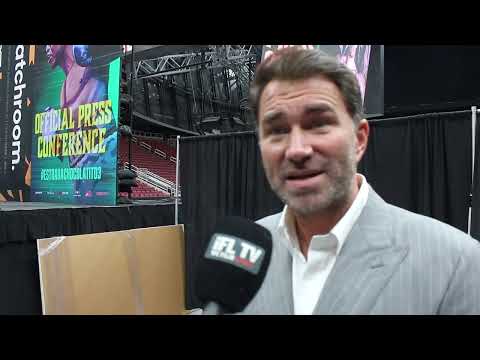 “In the same interview where he said it’s not about the money and then said a minute later, ‘wherever the most money is, I’m going.’ He has confirmed that he doesn’t want to fight for the IBF world title.

“So, therefore, he can’t fight for the undisputed. They’re not my words. They’re Tyson Fury saying, ‘I’m telling you now, I am not fighting for the IBF world title. It is not on the line. I am not paying the sanctioning fees unless they pay me back what I paid them in the past.’

“Therefore, Filip Hrgovic is now a shoo-in to fight Oleksandr Usyk. So, I think there’s a very good chance the IBF title will come vacant now for Usyk, which would be a shame because there would be no undisputed, but who knows?

“The reality is, money talks, and maybe the undisputed is on the line [for Fury-Usyk], but after Fury’s comments, it’s difficult for me because I have a great relationship with the Saudis. Prince Khalid is my friend, but I also work for Filip Hrgovic.

“We’ve had a couple of conversations recently where Prince Khalid has gone to me, ‘You know we want to do the undisputed.’ ‘I know, but I can’t not represent my fighter,’ and Kalle Sauerland is also pushing as well for Filip Hrgovic to fight Usyk.

“It’s going to be interesting, but I do expect to see Fury-Usyk next,” said Hearn.