Hearn says that the 32-year-old WBC and Ring Magazine super flyweight champion Estrada (43-3, 28 KOs) had a “gleam” in his eyes during Thursday’s final press conference that makes him believe that he’s ready for Chocolatito (51-3, 41 KOs) in their headliner, live on DAZN at 9:00 p.m. ET on Saturday, December 3rd.

Hearn admits that he felt that Estrada lost the second fight against Chocolatito last year in March in Dallas. The judges in Dallas, Texas, gave Estrada a 12 round split decision, and they were booed loudly due to their strange scoring.

In the eyes of many boxing fans, Chocolatito fought well enough to win 116-112. That fight took a lot out of Estrada. In his next fight, he looked like a shell of his former sell, winning another controversial decision, this time against little-known Argi Cortes last September.

With Saturday’s trilogy match in Glendale, Arizona, it’s hoped that the judges score the fight in a non-controversial manner because it would look bad if Estrada is given another questionable win. It would be another black eye for the sport.

“It’s a humble war; it’s quite weird. There’s no point in trying to get any beef out of them,” said Eddie Hearn to Fight Hub TV about the trilogy fight between Juan Francisco Francisco and Roman ‘Chocolatito’ Gonzalez this Saturday, December 3rd. 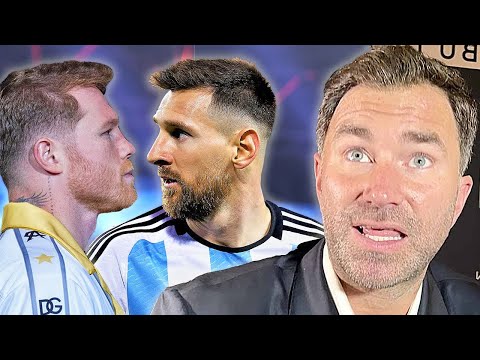 “Coming on the plane this week, I felt that Chocolatito was a decent-sized favorite in this fight because of his recent performances. But I’ve got to say, Estrada looks very good, healthy, and seems quite confident.

“Roman seems to be getting better and better, but can you keep up those levels of performances at this stage in your career? I think you’re going to get another classic.

“You’re always going to get elite performances from these guys,” Hearn said about Roman Gonzalez and Juan Estrada. “The last time out, Estrada didn’t look amazing against [Argi] Cortes, but he knew he was going to start his training camp two weeks after that fight.

“How deep do you want to go in that fight? I think COVID can really affect you in terms of your health and your fitness. Like I said, he [Estrada] looks really healthy. They both do.

“I just saw a little twinkle in his [Estrada] eye at the pressor. I still think Chocolatito is the favorite, but I think it’s going to be very, very close.

“At this point in their careers, you wait for both guys, particularly Chocolatito to kind of go, ‘That’s me now,'” said Hearn when asked when does he see Estrada and Gonzalez retiring.

“It’s really difficult when you see someone still improving. When I made Chocolatito against Kal Yafai, I thought, ‘Great timing for Kal.’ He [Chocolatito] came back there, won the world title, and beat Julio Cesar Martinez. I thought he beat Estrada in the second fight.

“It was a very close fight, very close, but he [Roman] look better and better. You don’t have a plan for those guys at this stage in their careers. I think you’re going to see a lot of fighters moving up and down.

“I still like Jesse Rodriguez against the winner, but obviously, he’s coming down to 112 to fight for the world title. If Estrada wins, I think the fight against Julio Cesar Martinez is a good fight as well.

“Big fights, but I think all eyes on the trilogy [this Saturday night]. While they’re elite and while they’re beating everyone, it’s just a personal decision, a family decision to say, ‘I’m done in boxing.’

“I think we’ve seen a lot of interviews from fighters talking about how difficult it is to leave the sport. When you’re okay. If you start getting beat and start declining, then obviously, it’s a different kind of decision.

“You see fighters like Tyson Fury talking about, ‘I don’t know what I’ll do about the sport.’ Maybe Chocolatito feels the same. ‘I love the sport, I love to fight, and I still feel I’m the best.’ But at some point, you will want to step down, and it’s always good to step down as the best,” said Hearn.