The management for the 6’5″ Dubois (18-1, 17 KOs) has arguably picked out the smallish 6’1″‘ southpaw Lerena (28-1, 14 KOs) to get Daniel ready for a potential future fight against IBF/WBA/WBO heavyweight champion Oleksandr Usyk, who is the same size.

Like Usyk, Lerena is a former cruiserweight with a similar mobile style. The South African Lerena has only had two fights under his belt since moving up to heavyweight division in 2022, beating Mariusz Wach and Bogdan Dinu.

Daniel Dubois: “I’m going to explode on Saturday,” said Daniel Dubois at the final press conference on Thursday. “With Fury, these are the guys I want to face next.

“These are the guys with the main belts. You want to be world champion. You’ve got to go for it. This on Saturday is a step in the right direction.” 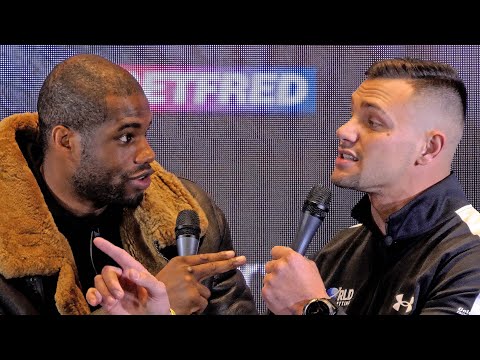 Kevin Lerena: “I’m not here to be an opponent. I’m here to make history for my country. It’s no secret that Daniel Dubois is a big strong power puncher. I think the most important thing is boxing. It’s not a strong-man competition.

“It’s not a bodybuilding competition. It’s not who looks the best. A smart man has longevity in the sport. I plan to be smart. I was smart during my cruiserweight career.

“He probably didn’t know about me until the fight was offered to him, but I knew about him. I want to show the world that I want to be on the big stage, and I want to stay.”

Dubois: “To me, Kevin is another opponent. I know he wants to rep and all of that. I’m gunning for him and ready to go. He’s a southpaw, and I’ve been getting plenty of practice. I want to add onto that.

“I want to take him out in style and destroy him and move on. My dad instilled the power in me, and I’m ready to unleash it. I’m a destroyer.”

Lerena: “He’s a destroyer. You can’t hit what you can’t see. You’re hitting people that are standing right in front of you.”

Dubois: “You’re going to be right in front of me, trust me.”

“I showed you the respect, and you underestimated me at your own peril.

Dubois: “Kill or be killed.”

Lerena: “You shouldn’t talk about kill. People die in boxing.”

Dubois: “Kill or be killed.”

Lerena: “I’ll take you to school.”

Lerena: “Correct. It’s the warrior code. Why did you want more money to fight me?”

Lerena: “That’s what your trainer said at the media workout.”

Dubois: “I don’t handle all of that.”

Lerena: “Okay, I understand. I said I don’t care about money. I want to challenge myself against the best. Warrior code. Saturday night, you’ll see.

“Boxing is a cut-throat sport, and I need to focus on the man ahead.”

Dubois: “Just tune in. It’s going to be all eyes on Saturday. Me and Fury, our fights, everybody is going to be watching. I’m going to be ready to go. Let’s get it on. Let’s go.”