Hearn says that Bivol’s recent victory over Canelo Alvarez is what gives him the edge over the unbeaten former WBO super middleweight champion ‘Zurdo’ Ramirez (44-0, 30 KOs).

If not for Bivol’s win over Canelo last May, Hearn states that he would view Saturday’s clash as a 50-50 affair. What gives Ramirez a good shot of winning is his huge size for the light heavyweight division.

Gilberto is one of the biggest fighters in the 175-lb division, if not the biggest, and he’d be right at home in the cruiserweight division against the likes of Jai Opetaia and Lawrence Okolie.

Considering how large Ramirez is and what a great body puncher he is, it’s important that Bivol not stand directly in front of him for too long because he’ll use his size and cruiserweight-level strength to overpower him.

If Bivol wins, he could face either IBF/WBC/WBO light heavyweight champion Artur Beterbiev for the undisputed championship or battle Canelo in a rematch if the Mexican star is feeling up to it.

“Zurdo against Bivol is one of the best match-ups in the sport. Before the Canelo Alvarez fight, Bivol-Zurdo was a 50-50 match up, really, because of his win over Canelo, it puts him in a pound-for-pound star,” said Eddie Hearn to iFL TV about this Saturday’s title defense for WBA light heavyweight champion Dmitry Bivol against mandatory Gilberto ‘Zurdo’ Ramirez.

“I’m making him [Bivol] the favorite in the fight, but Zurdo is 44-0, a former world champion at 168. It’s just a brilliant, brilliant match-up,” Hearn continued. “You have to back Bivol after the Canelo victory, but this is a very, very good fight.

“I don’t think coming off the Canelo fight you can make it a 50-50, but Zurdo is an elite fighter. So it’s not like he’s not a proven competitor. He’s a former 168-lb champion. He’s a brilliant fighter. 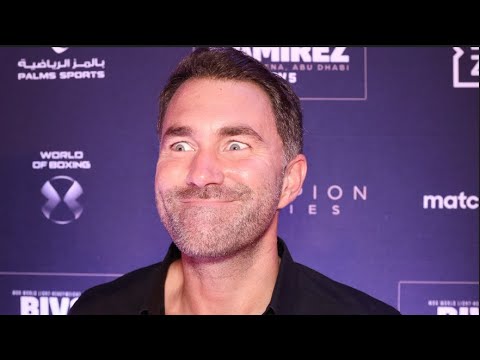