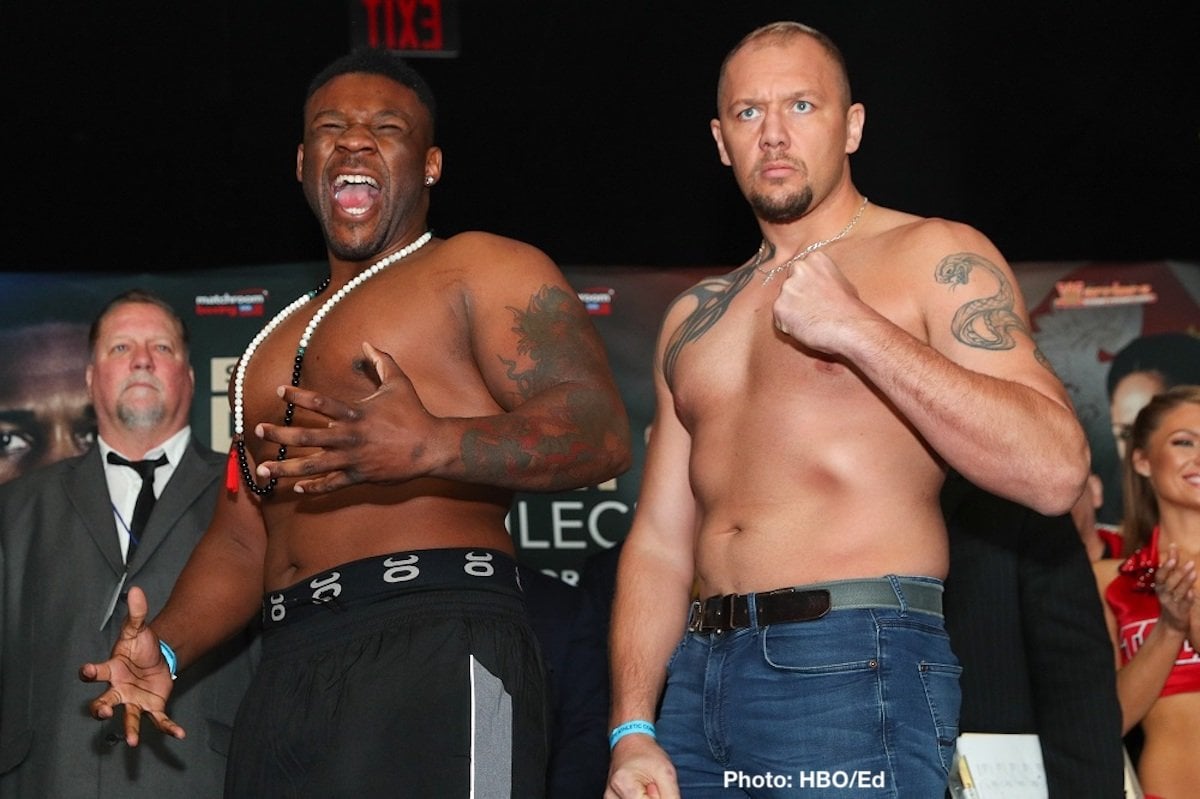 Photo: Ed Mulholland – His nickname is “Big Baby” and Jarrell Miller is one big, big man. We’ve seen the unbeaten Brooklyn heavyweight tip-in at the 298 mark in the past, but yesterday, in weighing-in for tonight’s fight with motivated Frenchman Johann Duhaupas (who told this writer how he “can’t wait to pull off a surprise!”) Miller raised eyebrows and dropped jaws by scaling a simply massive 304.4 pounds.

A career-high for Miller, this poundage quite understandably has plenty of people a little worried. Is Miller training as hard as he should be? How long can he fight effectively whilst carrying such a load? What will happen if Miller does get tired, if not in this fight then in another bout should he again enter the ring as hefty? Can Miller become the world heavyweight champion whilst fighting at such a weight?

If he did scale 304 once again and won the world title (or a version of it) at such a poundage, Miller would not become the heaviest ever world heavyweight champ, that distinction will belong to the colossus known as Nikolay Valuev until a man weighs more than 324 pounds in claiming the crown. Still, Miller would become the second-heaviest champ in boxing history.

Over the years, guys like George Foreman (250), Lennox Lewis (251) and, more recently, Tyson Fury (247), were referred to as “big guys” and rightly so, but Miller has taken things to a whole new level, modern era-wise. But the thing about Foreman, Lewis and especially Fury was (or still is in the case of the soon to return Fury), they all had significant height to go with their weight. Foreman (6’4”), Lewis (6’5”) and Fury (6’9”) all stand taller than the 6’3” Miller – and they all possess a longer reach. Valuev, meanwhile, stands an incredible 7’2.”

Miller has thus far silenced his weight critics by fighting at a fast pace in each of his fights and winning them all (bar an early career draw). Miller has yet to go the full 12 rounds though, and until he proves he can do so at such a heavy weight, these critics will continue to have their concerns.

Miller’s weight has fluctuated over the years, his lowest weight being 242, back in 2012, and now his highest being 304. Is Miller destined to be yet another “fat guy” who fails at top level? The sport is littered with these examples of failure, failure brought on, in large part, by a lack of discipline. In Miller’s defence, he doesn’t look “fat,” he just looks “big.”

But again, how long can “Big Baby” carry that 304 before fatigue gets to him? We may not find out against Duhaupas, but we could find out in future big fights.