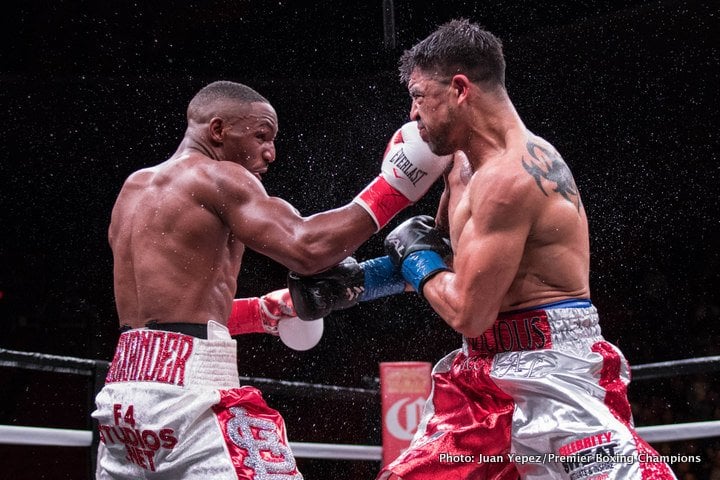 We were treated to a very interesting and entertaining week in the boxing word. Exciting fights, surprise upsets and questionable judging. We had it all. Here are a few quick points I took away from the past few days.

Devon Alexander is back.

This past Saturday in El Paso, Texas. Alexander the Great looked great (pun intended) against Victor Ortiz. Even though the fight was ruled a draw many ringside experts believed he easily won that fight. Decision aside Alexander looked like a man who enjoyed boxing again. He looked calm, controlled and even happy at times. After recently opening up about overcoming addiction you cannot help but root for Alexander, who was already a likeable young man. I for one am glad to see the Devon Alexander back in the ring.

Sonetimes we all need a reset. Whether we are recovering from a bad relationship or just feeling stagnant in our current situation. Trying something new or different can give us the jolt we need. Chris Eubank Jr. in my opinion is in need of just that. On the other side of the pond this past Saturday night Eubank Jr. lost a wide decision to George Groves. A fight he was favored by many to win. Eubank was younger, fresher and much faster than Groves. However the jab of Groves combined with strong technique and guts won him the night. While Eubank never stopped trying, his crude and wild swings made him look amateurish. Eubank is a very marketable fighter. He is a handsome young man, confident, well-spoken and comes to fight. However he is risking being labeled a domestic level fighter. As he has now lost both times he has stepped up to a world-class level. He looks like a world-beater more often than not however both Billy Joe Saunders and George Groves for able to expose some of the holes in his game. In order for Chris Eubank Jr to maximize his amazing potential a change in scenery might be in order. It only 28 years of age he still has plenty of time to right the ship. Maybe moving his Camp to a new location or getting a new trainer to address some of his technical flaws might be necessary.

Also for years many have wondered if his dad they’re great Chris Eubank senior was an asset or detriment to him. Mimi have argued that Chris Eubank senior is too involved in his son’s career and can be a distraction. For Joe Calzaghe his dad was the only trainer he ever needed. However in the case of Roy Jones jr. His career did not take off until he broke away from his day.

Either way before it is too late I believe Chris Eubank Jr needs to make a move. He needs to hit the reset button on his career and making a few changes so he can reach the levels we all expected him to.