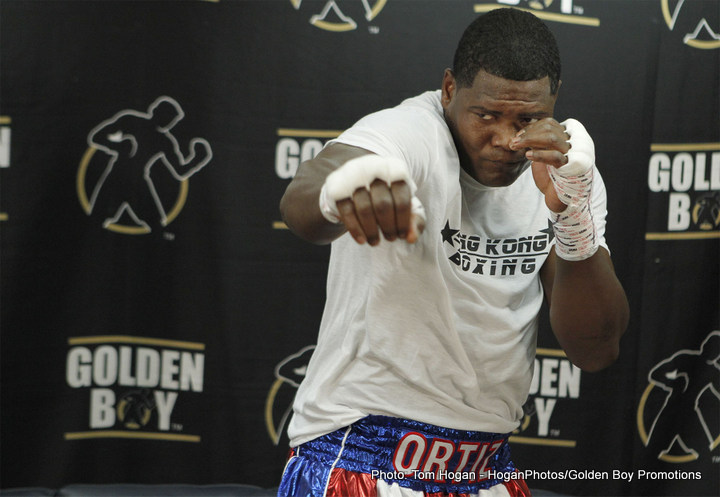 The rescheduled Deontay Wilder-Luis Ortiz fight is just days away – nine in fact – and everyone who was excited to see the fight back in November is hoping Cuban southpaw Ortiz comes out clean in any and all drug tests preceding the bout. And, according to Ortiz’ manager Jay Jimenez, his man has indeed been a good guy; being tested some seven times, by the Voluntary Anti-Doping Association, and coming out clean as a whistle.

Jimenez, speaking on a conference call (quoted by ESPN.com), insists his fighter is no cheat. Still, Wilder, who could so easily have moved on and fought someone else other than Ortiz, couldn’t resist saying how Ortiz will always carry with him the stigma of “once a cheat, always a cheat.”

Speaking on the same call, the WBC heavyweight king said that although he feels Ortiz “will do the right thing” this time and not mess the fight up a second time by testing positive for something illegal, “that could happen.”

“That’s a possibility,” Wilder said in answer to a question that wondered if “The Bronze Bomber” is worried Ortiz will indeed test positive again. “We always say once a cheat, always a cheat and that’ll always carry with him. But that’s gonna be up to Luis Ortiz. I think Luis Ortiz is a smart guy and I think he’s gonna do the right thing up until this point. If he don’t, it’ll be shame on him to put people through so much stress, so much pain, like it was the first time. But I think he’s gonna do the right thing. I’m confident in him, that he’s gonna turn up clean and give a great performance on the night of that fight.”

This is of course what we all want: a great heavyweight rumble between two proven punchers; neither of them aided by anything illegal. It really would be the end of Ortiz if he were to test positive for anything illegal a second time (for this particular fight). Ortiz is a very dangerous proposition for any heavyweight, and again Wilder deserves credit for being so determined to face him.

Both men are predicting a KO win, and Wilder is predicting a good night for the fans. Just as it should have been four months back.