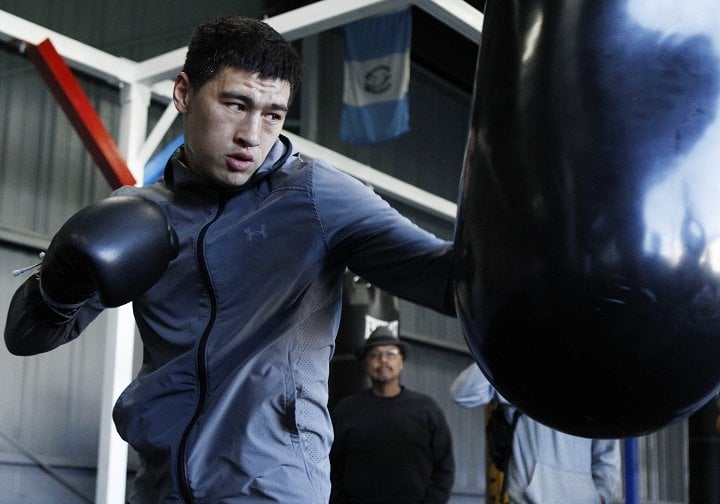 On starting in boxing as a child: “To be honest with you, I don’t remember much of my life outside boxing. Everything I remember has been something to do with boxing. I’m thankful to my parents that they kept me in the sport and they’ve allowed me to be in the sport.”

On his greatest strengths: “It’s difficult to say, but I move good. My feet, my speed – well, everything! Every fighter must think about himself only the best. Because of that, you can be better, you can be a winner. If you think about yourself, ‘I’m not good,’ negative, you will hurt yourself. Confidence, but not over confidence.”

On fighting Sullivan Barrera: “I want to fight with the best guys. Barrera accepted our challenge. I’m glad he did.”

On getting top opponents to fight him: “Any good fighter probably has difficulties with getting guys in the ring, fighting the right guys. But my job is to train and I believe, I really believe, that my team is going to be able to come together and make things happen. I know they can.”

On seeing a large Russian fan base in New York: “Of course it’s a pleasure to fight on a card where there’s going to be two world champions from Russia, fighting on the same night, one fight after another. I think the fans should be very glad, the Russian fans and all the fans who like both of us, will come and see both of us fight. I hope everybody comes out. It will be an interesting night.”

Any pressure fighting on the same card as two-time world champion Sergey Kovalev: “Every fight for me is a lot of responsibility. I have to be responsible for my fans, for my family, and to my team. That’s my main responsibility. Mostly, I’m happy to be fighting at such a legendary place as Madison Square Garden and fighting with one of the best fighters out of Russia, Sergey Kovalev. He’s considered one of the best right now. That adds a lot and I’m grateful for the opportunity.”

It was tough to tell who was having more fun: WBA Light Heavyweight World Champion Dmitry Bivol (12-0, 10 KOs), or the two dozen teens who met with him and watched him train at the Legendz Gym on Tuesday, February 20.

When Bivol learned about the partnership between gym owner Roger Ruiz and the Anaheim, California based “Faith Fighters International” youth organization, which teaches kids to use faith and sports to overcome personal obstacles, it reminded him of his own youth, and his own young children.

“When I heard about this, I thought about what I’ve been through, and how I got to where I am today … Roger and Legendz Boxing told us about this organization, and the fact there are these kids coming in to train. We talked about it … part of giving back is supporting a lot of these kids and giving them the opportunity.”

Many of the teens live in foster care or group homes, and others have mental or physical challenges. Each received an invitation to watch Bivol train, and then meet and talk with him personally. Bivol presented every single participant with a set of signed boxing gloves provided by Everlast, and posed for numerous photos.

Even more valuable was the time Bivol spent with each teen, fitting the gloves and encouraging them to throw some punches at the formidable world champion. The smiles and laughter flew as fast as the fists.

Faith Fighters International Executive Director Kenya Lawson said Bivol’s own personal story fits in perfectly with their mission. “Sports has really helped him, not only him but his entire family, create a whole different type of legacy. And that’s what sports does.

Bivol understands. “I know a lot of people, a lot of friends actually, that have changed their lives due to sport, and due to boxing specifically. It has affected their life in a very positive way. That’s why I like to tell people outside the sport, if they have the time, if they have the opportunity to spend time in boxing or other sports, it will definitely affect them and leave something useful for them in their entire life,” Bivol explained.

Bivol’s open nature and genuine encouragement transcended any language barriers. Despite their troubled backgrounds, the teens naturally gravitated to the warmth of the fearsome Russian champion who let them know he understood their struggles.

“I’m very happy that everybody who has taken part in organizing this event took the time to give some of the kids here the opportunity to take a look at the training, and see how I train. Maybe they will find the motivation to come here again and train, or do whatever they like in sports … Boxing could be one of them,” said Bivol.

Turning to the kids, Bivol told them in translated Russian, “Because I think that it will affect you guys, and it’s a good way to find something for yourself that, really, you can relate to and be loyal, and maybe find a new outlet from it.

“It’s important to consider that sometimes at the gym, you could meet the most loyal and closest people that you have. It builds a connection and a network … You don’t have to be a professional, you know, to become a champion.”

Lawson of Faith Fighters says it’s not enough to be a gifted athlete without good character. “You have to do what he’s (Bivol) doing, you have to give back. That’s super, super important to us. So to partner up with him, and Main Events, and all these wonderful organizations, that not only believe in winning, but believe in giving back. It’s just a really big thing for us.”

Bivol intends to continue his relationship with Faith Fighters International, providing his time and support on an ongoing basis. Bivol issued a standing invitation to the program participants to join him on sparring days when training for a fight, a rare privilege in boxing. “I don’t like a crowd when I’m training,” said Bivol with a smile. “But if people are around me to come here on training day and watch (from your group), that will be a pleasure for me.”