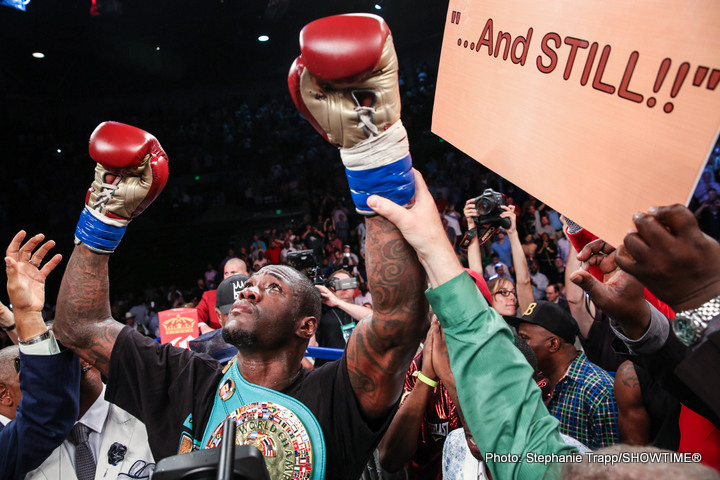 For many fight fans in both the US and in Europe, particularly the UK, there is one heavyweight clash they would like to see more than any other – and it DOESN’T involve a Klitschko.

It is of course the hugely anticipated clash between Alabama puncher Deontay Wilder and self-professed ‘Gypsy Warrior’ Tyson Fury – which, when it eventually happens – will surely be one of the most entertaining build ups’ to a fight in a good long time. Not to mention the fact, that due to their individual strengths and frailties, it is a real 50/50 fight and could surely go either way.

Sadly for those fans, despite their often humorous twitter banter, Fury is next in line for dominant lineal champion Wladimir Klitschko and a fight with Wilder is probably at least a good year away at the moment.

Deontay, who laboured to victory a week ago against unheralded and unfancied teacher Eric Molina in his home State of Alabama, has spoken to fighthype.com to talk Fury/Klitschko – and to offer his take on how it may well go down.

“It’s gonna be an interesting fight when it happen’s ’cause you got two tall guys in there. It definitely gonna be who thinks the smartest in the ring of course – ’cause Klitschko gonna be the expert in the ring with the most experience – but this is boxing and anything can happen. You can get hit unexpectedly and you never know how a fighter gonna react when he gets hit.”

“It’s an interesting fight and Tyson definitely got a winning chance in that fight. Any heavyweight that puts on 18 ounce gloves man, (has) gotta winning chance.”

While the consensus seems to be among fans that Klitschko will indeed dispose of Fury and then finish things up by unifying the division and beating Wilder, the Fury team believe they have the tools to upset the odds – Tyson’s giant 6ft 9″ frame being one of the most naturally effective in their armoury.

Klitschko will no doubt have trouble implementing his usual clinch-lean tactic against Fury – something, incidentally we saw him deducted a point for recently – the first time such a thing has happened in as long as I can remember. With Wlad now also pushing 40 and motivation surely ever harder to find being he is a new father and family man, some sense the changing of the guard in the heavyweight division could be coming sooner that we all think.

I’m not suggesting that Tyson Fury is going to beat Klitschko, so don’t misinterpret things – but he sure is a live underdog and Deontay’s comments about “a winning chance” couldn’t be truer for me. Tyson has also matured much as a fighter and makes few of the same silly mistakes that saw him dropped by the likes of Nicolai Firtha and Steve Cunningham earlier in his career.

Whether we will see the fight in the UK or Germany remains to be seen, however one suspects that by the time Tyson and Deontay do indeed clash – neither will be heavyweight champions. It’s certainly very possible.

With Alexander Povetkin being WBC mandatory, Deontay may well soon be off to Russia to defend (and probably drop) his own portion of the heavyweight championship if his team and Haymon lose a purse bid to Povetkin’s wealthy Soviet backers – and in that event any eventual Fury v Wilder fight will be for bragging rights only.

I wish they’d fought each other first.