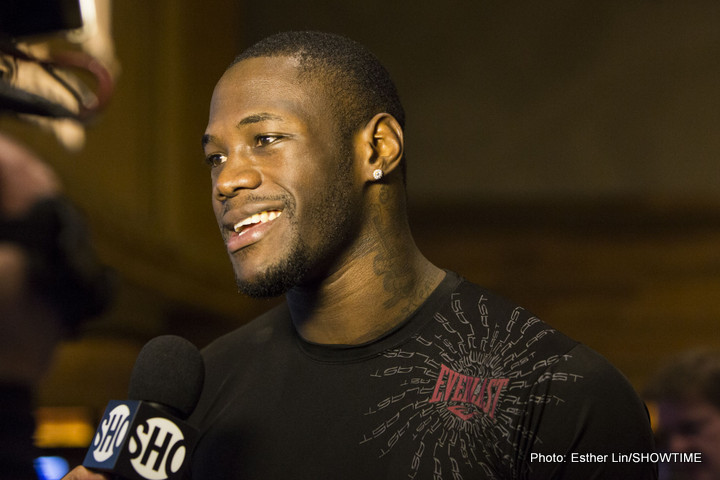 WBC heavyweight champion Deontay Wilder has promised that he is the man to truly unify the heavyweight titles and revitalize big-time heavyweight boxing in America.

Wilder is set to box another voluntary defence of his title in January, and is indirectly embroiled in the ‘Czar’ Glazkov/IBF/threat-to-strip Fury saga that has been well publicized this week (see previous articles)- a saga that saw [IBF #1] Glazkov passing on a shot at the American WBC titlist in favour of a fight for the [vacant] IBF belt that looks set to be stripped from new lineal champion Tyson Fury, for immediately rematching Wladimir Klitschko as contractually bound, instead of fighting Glazkov.

Wilder was granted a 3rd voluntary defence of his title by the WBC, given that his mandatory challenger Alexander Povetkin is unable to fight until next spring, though Wilder asserts he will be coming for Fury and whoever else has a title when the time comes, swearing he can become America’s first undisputed heavyweight champion since Evander Holyfield 25 years ago.

“At the end of the day I will unify the division and bring all the belts back to America,” Wilder promised Sky Sports before addressing the Fury/IBF/Glazkov issue.

“They [IBF] are not giving Fury enough time to prepare. The man has just won the belts, man. I feel they should give him a chance to enjoy it but they are rushing him and I don’t think that is fair to him.

“Now all the mandatories want to fight Fury rather than come to me. I want to be the part and look the part. When it is time for me to come and collect, [the belts] are coming back to America, I promise you that!,” he added.