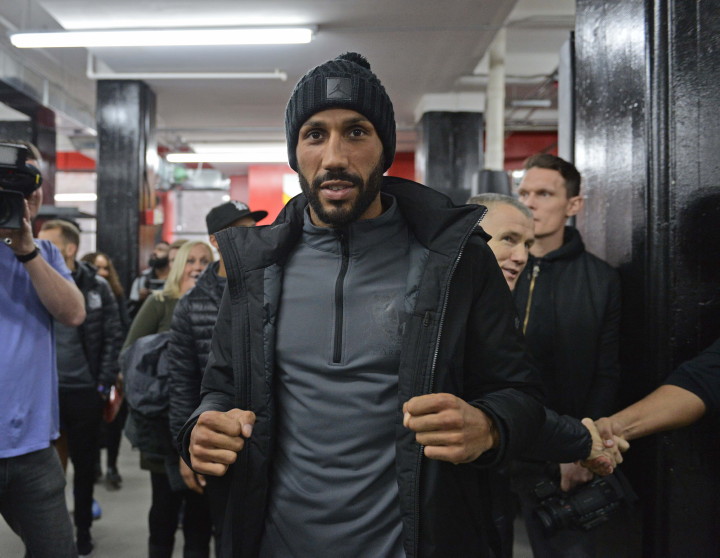 Fight week activities officially began today with media workouts at the brand new Gleason’s Gym in Brooklyn before the super middleweight title unification showdown between Badou Jack and James DeGale that headlines action this Saturday, January 14 from Barclays Center in Brooklyn and live on SHOWTIME.

Tickets for the live event, which is promoted by Mayweather Promotions and DiBella Entertainment, start at $25. Tickets are available now and can be purchased online by visiting www.ticketmaster.com, www.barclayscenter.com or by calling 1-800-745-3000. Tickets are also available at the American Express Box Office at Barclays Center. Group discounts are available by calling 844-BKLYN-GP. 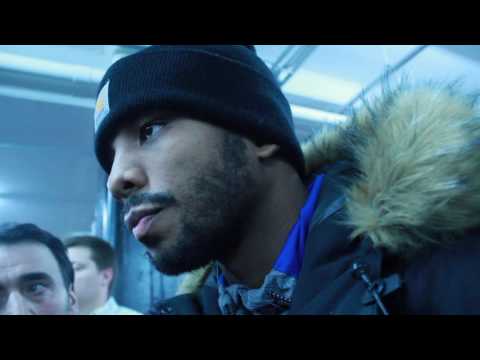 “I’m just trying to stay positive and enjoy this moment. I wish that the fight was tomorrow night. But we’re showing patience and bracing for the opportunity.

“I’ve seen DeGale fight a few times. His last couple of fights I don’t think we’ve seen the best of him. I want the best James DeGale to show up on fight night. There won’t be any excuses on fight night.

“I’m going in there to break him down. I’m going to be the better fighter. If I get an opportunity to land something that can change the fight, I’m going to take my chance.

“This has been one of the best training camps of my career. My nutrition is better than it’s ever been and I have positive people around me.

“I believe I can knock anybody out who gets in the ring with me. If you don’t believe that in yourself, then you’re in the wrong sport. I’m not expecting an easy fight, but I’ll do whatever it takes to win.

“My trainer Lou Del Valle is the reason that I’ve improved so much. I brought him back in after my loss and he’s helped get me to where I am right now.

“There is no doubt we’ll know who the best super middleweight in the world is after Saturday night.” 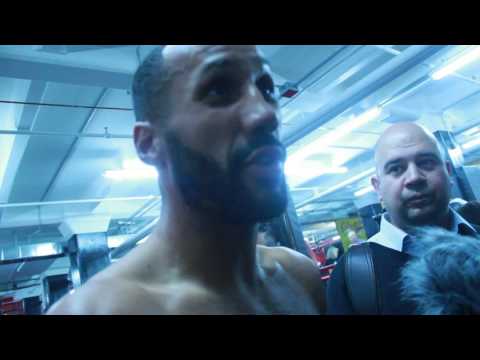 “I just flew to New York on Monday after a brilliant camp. I’ve been training well and sparring hard. I’ve had some great work on the track and I’ve ran a lot of miles. I’m in fantastic shape.

“I’ve sacrificed a lot to put myself in this position and to make sure this was a great camp. Now the time is here.

“To have a media day in Brooklyn is great. I’m in a fantastic position in my life and career. I’m more comfortable than I was years ago. Back in the day I wouldn’t know what to say. I’m a man now and I’m ready to reach my destiny.

“Movement, speed and angles are my keys. If I’m focused and take no rounds off, that should do it. It will do it. Anything can happen in boxing, but I’m too prepared for this.

“I look at Badou Jack, and even though he’s been getting better, I think I’m a much better fighter. He’s very high quality and I have to be on my game. It’s going to be a great fight, but I will be victorious.

“My loss to George Groves was a blessing in disguise. If that didn’t happen to me, I don’t know where I would be in my career. I was too big for my boots back then. I thought I was the golden boy and I was humbled. I had to rebuild and I came back.” 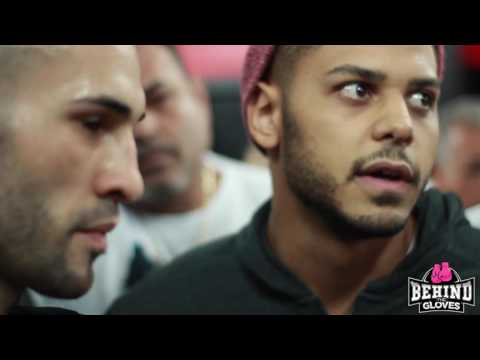 “I let [Gervonta] Davis do the talking. I like when people talk like that, because I get to shut them up on the night of the fight. He’s a Floyd Mayweather imitation. Just like all imitations, it’s not as good as the real one.

“I’m very happy to be here representing Puerto Rico in New York City with another Puerto Rican champion in Amanda Serrano. She’s a four-time champion who is very accomplished and it’s an honor to be on this card with her.

“I feel ready to fight. I’m anxious to get in the ring. I can’t wait for Saturday night and to show the whole world what I’m made of.

“I have the advantage in experience and in reach and height. He’s going to try to bring pressure but I’ll be ready for it.

“Not only do I have more pro experience, but more amateur experience as well. All of these years of being on the big stage is going to help me in the fight.

“I don’t think I’m underrated. People know my quality, which is why people avoid fighting me. I believe I’m the best fighter at 130-pounds.

“I’m ready for any type of fight. The question is, will Davis be ready? If Davis gets tired, he’s going to have trouble in the late rounds.” 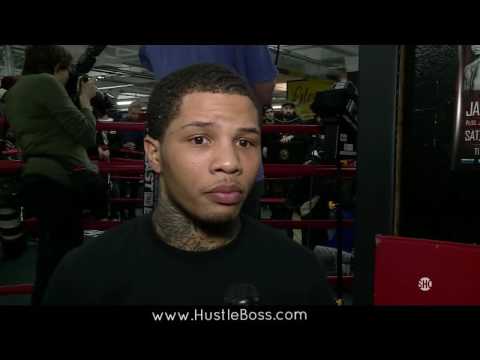 “I feel great right now. I’m in tip-top shape. I had the best sparring available and everything went smoothly. I’m ready to go to work January 14.

“We know that Pedraza is a world champion who comes in undefeated. He does a lot of good things in the ring but we’ll be ready for them come fight night.

“It feels good to be on this stage. I feel ready to headline my own card. I’m ready to do my own thing and that comes with winning this world title.

“I haven’t watched too much of him, but my team is prepared. He doesn’t have anything I haven’t seen before. We just have to execute the game plan when the bell rings.” 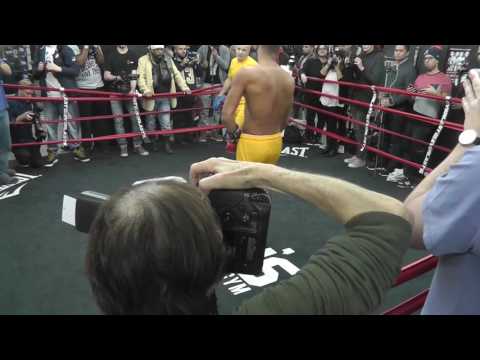 “I know that I’m up against a girl who is a heavy hitter and can punch hard. I’ve been training extremely hard to prepare for this fight because I know I’m facing a dangerous fighter. I just need to maintain my weight up until fight night.

“I’ve trained with a lot of southpaws to prepare for Serrano’s style. It’s only the second time I’ve faced a southpaw. I come in with a game plan, but once you step in that ring, I know that anything can happen.

“I’m a veteran and I have the experience. Serrano will have to overcome my advantage there.

“I’m excited to be fighting in the U.S. and I know that this is a huge opportunity. Fighting on television is something I have to take advantage of. After this fight, people will really see what female boxing is all about.

“I’m very motivated and excited that I have the chance to fight in Brooklyn in the best city in the U.S. for boxing. I’m going to come to fight. I won’t back down and we will be in the middle of the ring exchanging.”

“I’ve seen Aleem fight and he’s nothing special. He’s very fast. He does everything very quickly. But he can be hit. He has a little bit of power, but I can hit him.

“I’m going to take advantage of his mistakes. I’m ready for this fight and I’m going for the knockout. This isn’t going to be a long fight. I think I will knock him out in five or six rounds.

“I’m an aggressive fighter. I want to brawl. I want to throw a lot of punches. I’m happy if I can throw 100 punches in a round. Nobody can take that kind of punishment and it helps me get my opponent out of there.

“I’m happy to be fighting in Brooklyn at Barclays Center. It’s very important to my career. After this fight I am going to get big steps up and big names. I’m going to show what I can do on Saturday.

“I want to fight for a real world title. I’m ready for it and I just want to face good opponents and challenge myself.”

“This has been a great training camp. I have George Peterson in my corner and he made Paul Williams a three-time champion. He’s putting me through the same regimen that made him one of the most feared fighters in the sport.

“I don’t know too much about my opponent. We have a game plan based around him being some type of bull, but my trainer is the one analyzing that, and then we go from there.

“I bring the total package into the ring. There’s nothing I can’t do. I can box and I can brawl. Most importantly, I can make adjustments during a fight.

“A win here will really stamp who I am in this sport. We’re leading to become a world champion. I’m not a regular fighter in there. I can beat these top guys.”

“I can honestly say that this is one of the best training camps that I’ve had. I’m both nervous and excited. I’m nervous because I’ve never had a training camp like this and I’m excited to see how I feel in the ring.

“I’ve seen a few tapes of my opponent. He’s a very aggressive fighter who throws a lot of right hands. I have to prepare myself for that. If he wants to start early or take his time, I’m ready for anything.

“I’m very confident heading into this fight. I believe that I will put on a great performance and possibly the best of my career.

“I’m very thankful to be fighting at home in Brooklyn and I’m humbled to have the opportunity to perform at Barclays Center once again. There’s no better feeling than having your friends and family cheering you on.

GENERAL INFORMATION ON THE SUPER MIDDLEWEIGHT DIVISION IN WBC HISTORY

21 world champions have been recognized by the WBC, of whom only three have regained the title: Markus Beyer (Germany), Thulane Malinga (S. Africa), Carl Froch (GB).

64 super middleweight world championships bouts have been sanctioned in the history of the WBC.

This will the the 20th super middleweight world title bout held in the United States in WBC history.