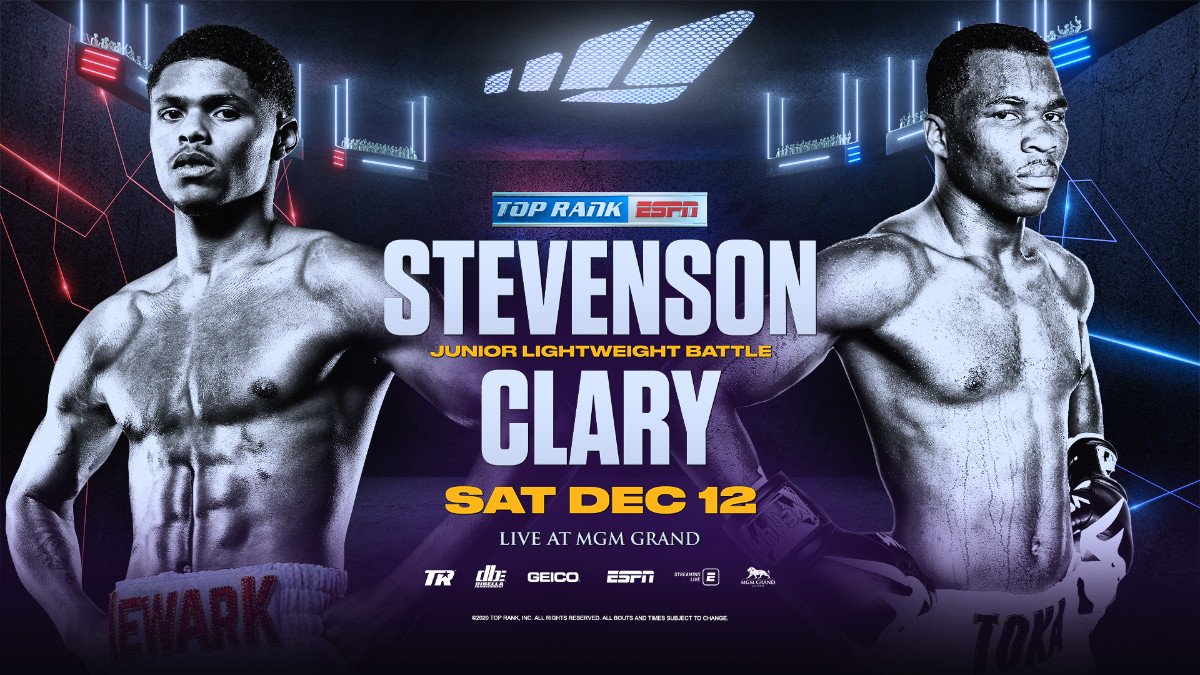 One of the leaders of boxing’s electric youth movement, Shakur Stevenson, is set to close out 2020 in grand fashion. Stevenson, the undefeated former featherweight world champion from Newark, N.J., will fight Toka Kahn Clary in the 10-round junior lightweight main event Saturday, Dec. 12, from MGM Grand Hotel & Casino in Las Vegas.

The 10-round co-feature will showcase Puerto Rican lightweight star Felix “El Diamante” Verdejo against Japanese contender Masayoshi Nakatani. In the ESPN-televised opener, super middleweight wrecking ball Edgar “The Chosen One” Berlanga, 15-0 with 15 first-round knockouts, will fight an opponent to be named in an eight-rounder.

“I have no doubt Shakur Stevenson will put forth another tremendous performance as he prepares to challenge for a junior lightweight world title in 2021,” said Top Rank chairman Bob Arum. “Toka Kahn Clary is a highly skilled southpaw boxer, and I expect him to be in top form. With Felix Verdejo and Edgar Berlanga in action as well, this is a great card to close out 2020.”

Teofimo Lopez sending contract to Devin Haney for next fight

Stevenson (14-0, 8 KOs) took the fast route to a world title after capturing a silver medal at the 2016 Rio Olympics. Last October, a little more than three years after turning pro, he bested Joet Gonzalez via unanimous decision to win the vacant WBO featherweight world title. After COVID-19 forced the cancellation of a March title defense against Miguel Marriaga, Stevenson moved up to junior lightweight and kicked off the MGM Grand Las Vegas Bubble experience June 9 with a knockout win over Felix Caraballo.

Said Stevenson, “I was really hoping to get another fight in 2020, so I jumped at this date when it was offered to me. I started training camp the next day and am preparing for another stellar Shakur Stevenson performance on December 12. I’m putting the 130-pound division on notice. I’m the best junior lightweight in the world, and my first fight of 2021 will be for the WBO title.”

Kahn Clary (28-2, 19 KOs), a one-time top prospect from Providence, RI, is an eight-year pro who turned around his career following a stunning first-round knockout loss as a 19-0 prospect in 2016. He lost a close decision to Kid Galahad in an October 2018 featherweight world title eliminator, and since that defeat, he has won three straight at junior lightweight. Kahn Clary last fought October 29 and knocked out veteran Jonathan Perez in two rounds.

Said Kahn Clary, “I want to thank Top Rank and DiBella Entertainment for giving me this opportunity to showcase my talent. There is no doubt that Shakur is a great fighter. He’s fast and very skilled, but so am I. Come December 12, boxing fans will see the difference between a man and a boy. I’m in the best shape of my life, and the world will see Toka Kahn Clary shine.”

Verdejo (27-1, 17 KOs), a 2012 Olympian and the 2014 ESPN.com Prospect of the Year, is now a contender seeking a world title opportunity in a talent-rich weight class. He has won four fights since a March 2018 defeat to Antonio Lozada Jr., most recently knocking out the previously unbeaten Will Madera in one round July 16 inside The Bubble. Nakatani (18-1, 12 KOs), from Osaka, Japan, is a former long-reigning OPBF lightweight titleholder who made his United States debut on July 19, 2019. On that evening, he pushed then-contender Teofimo Lopez the distance in a grinding 12-rounder.

Said Verdejo, “Before my last fight, I promised my fans and followers of boxing everywhere that I would shine again. And I did. Now, on December 12, I have before me the most important challenge of my career. I won’t make the mistake of looking past Masayoshi Nakatani because I know a world championship opportunity is at stake. That is my motivating force.”

Berlanga (15-0, 15 KOs) is back in short order following his headline-grabbing first-round knockout over Lanell Bellows on the Vasiliy Lomachenko-Teofimo Lopez undercard. After the knockout, the young knockout artist climbed on the ropes and proclaimed, “I’m a [expletive] monster!” Come December 12, he’ll look to make it a Sweet 16 and move closer to the record of 21 first-round knockouts to start a career, held by the late Ali Raymi.

Berlanga said, “Top Rank has given me another huge opportunity to showcase my skills. I’m just grateful for this big platform and to everyone who made it happen. On December 12, you’re going to see the Puerto Rican monster at it again.”

Knockout artist Elvis “The Dominican Kid” Rodriguez aims to leave the building with one last knockout to end 2020. Rodriguez, who has four knockouts in three rounds or less since July, will face veteran “Lethal” Larry Fryers in a six-round welterweight contest Saturday at MGM Grand Hotel & Casino in Las Vegas.

“I am grateful for the opportunities that Top Rank has given me and the effort of my team to keep me fit and ready,” Rodriguez said. “I would like to be recognized as Prospect of the Year. It would be a great recognition of my talent, effort, sacrifice and discipline. I believe that I would be the first Dominican boxer named Prospect of the Year. Representing the Dominican flag is a source of pride for me. I feel committed to bringing a world title to my country.”

Said Top Rank Chairman Bob Arum, “I have not seen a more talented prospect this year than Elvis Rodriguez, and with the incomparable Freddie Roach in his corner, he is in wonderful hands.”

Rodriguez (10-0-1, 10 KOs) is 5-0 in 2020, including a slew of highlight-reel knockouts since making his Bubble debut July 2 with a one-punch knockout over Danny Murray. He last fought Oct. 9 and knocked out the usually durable veteran Cameron Krael with a right hook in the third round. Fryers (11-3, 4 KOs), a New York-based Irishman, returns to The Bubble following a unanimous decision loss in June to unbeaten prospect John Bauza.