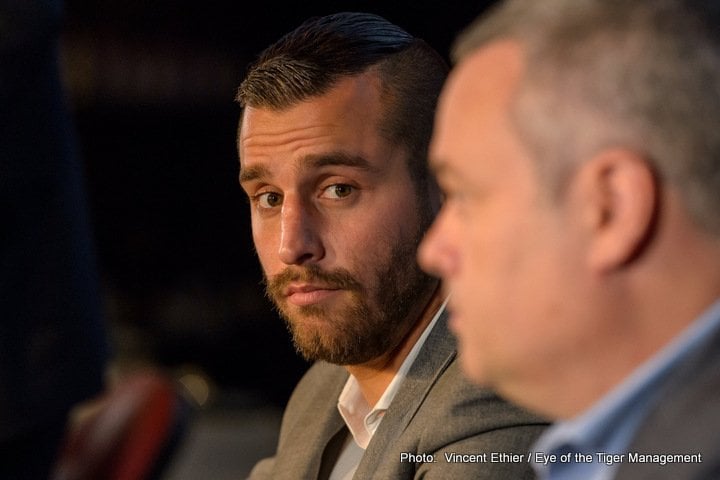 De La Hoya views Saunders (25-0, 12 KOs) as a tricky fighter, who will have some clever ideas up his sleeves on December 16, but he feels that Lemieux (38-3, 33 KOs) is going to be looking to impose his will on the unbeaten Brit to get him out of there right away. De La Hoya feels that Saunders lacks the punching power to keep Lemieux off of him.

Saunders has looked like a fighter on the downside of his career in his last 2 fights against Artur Akavov and Willie Monroe Jr. That might be a training and diet issue related to Saunders not fighting frequently since his win over Andy Lee in 2015. Saunders has fought only twice since that time, and he’s put on a lot of weight in between fights.

Saunders was out of the ring for 1 year after his win over Lee. The World Boxing Organization didn’t strip Saunders of his title despite him being out of action for 12 months. When Saunders did come back against Akavov, he looked like the shell of the fighter that had beaten Lee and Chris Eubank Jr.

The judges gave Saunders the win over Akavov, but he probably should have lost. Akavov outworked Saunders in 7 of the 12 rounds, and landed the better punches in every round of the fight. The fight took place in the UK. Akavov is from Russia.

“Whatever he brings to the table, so whether he wants to box, fight, I think Lemieux can make it a very interesting fight,” said De La Hoya. “Saunders is tricky, very awkward. And he hits, and he can bang.”

Saunders is tricky, and he’ll likely be moving a lot, holding and trying to keep Lemieux from getting his punches off. Saunders is at his best in the first 6 rounds of his fights. After the 6th, he fades quickly and does very little. You can argue that Saunders is a 6-round fighter, and he has been for a number of years. Saunders’ poor stamina has been camouflaged mostly due to careful match-making.

Saunders hasn’t faced many quality fighters during his career. The best guys that Saunders has fought so far are these fighters:

Only Lee, Eubank Jr. and Monroe Jr. are world class fighters. The rest of them are or were domestic level fighters.

Saunders is going to need to be on the run in the first 6 rounds for him to keep from getting knocked out by Lemieux. The Canadian fighter is in the prime of his career right now, and he’s incredibly dangerous during the early portion of his fights. Lemieux is still very dangerous even in the later rounds. He’s improved his stamina a great deal.