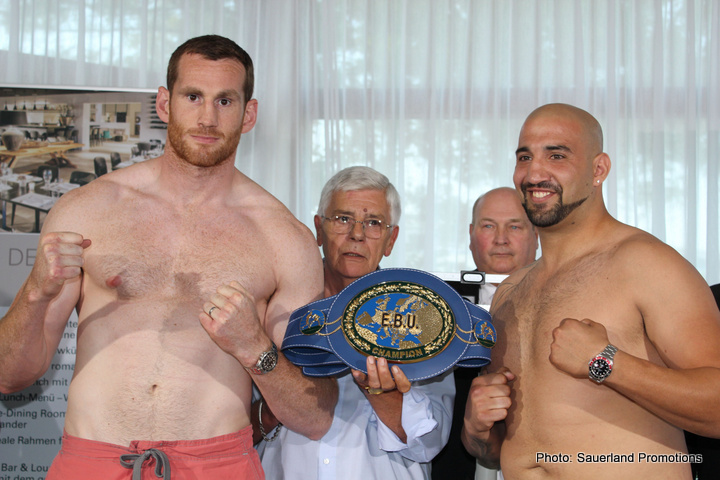 Tonight in Germany the David Price rebuilding project hits it’s first real obstacle when the giant Liverpudlian fights unbeaten German Erkan Teper for the European heavyweight title in what is a “must win” fight.

Defeat tonight will surely spell the end for Price, who’s career was in the wilderness after back to back knockout losses to wily old American veteran Tony Thompson in 2013.

After parting with then-promoter Kellie Maloney, German heavyweights Sauerland Event invested heavily in Price and he is keen to reward their belief with a solid win against Terper in Ludwigsburg tonight.

Speaking via ‘The Mirror’, the 6ft 8″ giant admits that nerves played a huge part in the 2nd loss to Thompson, which 5 months after the 1st, proved to be absolutely devastating in terms of career progression – but with the EBU belt on the line tonight, a solid win can springboard him right back into the mix, and psychologically, he insists he feels ready;

“Before the second Tony Thompson fight, I just felt nervous. I had butterflies, which explains why I gassed out so quickly.”

“Now I’m just enjoying being part of a big fight again. I’m enjoying each step of the journey.”

“A lot has happened in the two years since that happened. I’ve only had four fights, but these two years seem a long time.”

“I feel like a completely different fighter technically and emotionally. I’m expecting everyone to see a big change come Friday.”

And if there is one thing Price is now fully understanding of, it’s that when opportunity knocks, you answer the door.

“It’s a big opportunity,” he said. “To be European champion in itself is big but there are also the doors that possibly could open if I win this title, so it’s a big fight, no doubt about it.”

“I’m treating it like a big fight and I’ve trained really well for it.”

Anything other than a big win tonight against the unbeaten German and Price will well and truly be on the heavyweight scrap heap.

No pressure there then!