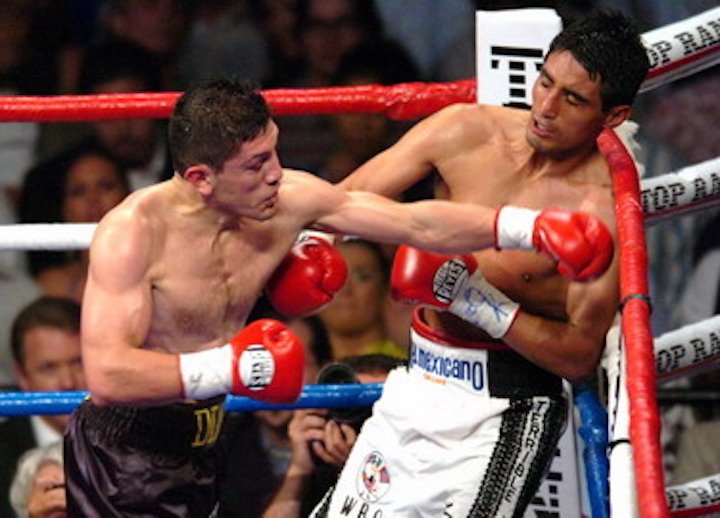 “I’d never seen anything like Pacquiao before. I’d block one shot and he’d hit me with another one as I was trying to parry still another one!”

Mexican/American warrior David Diaz gave his all when he fought. Seemingly never involved in a dull fight, the gutsy southpaw rumbled with the very best – including a peak Manny Pacquiao and a past his best but far from done Erik Morales (photo by Naoki Fukuda).

Diaz, a 1996 Olympian, won the WBC lightweight title in 2006, and he defeated Morales but was stopped in brutal fashion by Pac Man. Diaz retired with a more than respectable 36-4-1(17) pro record.

Diaz has over the past few years been kind enough to look back on his big fights with this writer.

David Diaz – “That was a great moment in my life. All my family and friends were there for that fight. The funny thing was, when I got the call for that fight I was in Florida, having a real good time. I got the call and I had to stop the drinking and the partying (laughs). But I had two months’ notice for the fight which was okay for me. In that fight, I felt I was winning comfortably, but my manager Jim Strickland, he told me, after around eight or nine rounds, that we needed a KO. I said okay, I’ll try and get one. Fortunately, I did manage to get my energy back and stop him with a non-stop barrage after I’d hurt him with a nice uppercut. I just jumped all over him.”

On the Morales fight:

D.D: “It was a really tough fight. I definitely knew I’d have to play catch-up in that one, as I was knocked down in the first-round. But I felt that if I could make him get tired, push him hard, I could stop him late on. I never managed to stop him but I won a decision. It was a great, great moment for me; winning a world title in my hometown. That was something I’d always wanted to do. As for looking up to Morales, I didn’t really. I respected him for all he’d done, but my hero was always [Julio Cesar] Chavez. There really is no other.”

On the Pacquiao fight:

D.D: “Honestly, going into that fight I thought – as all fighters should think when entering any fight – that I would definitely win. I thought to myself, ‘this kid is coming up to 135, no way can he beat me.’ It was just another fight to me at the time, there was actually no great magnitude to it. If you look back at those early rounds you will hear me say that the punches are not hurting me, that it is just the speed and accumulation of punches. I honestly was not hurt. But I made the dumb mistake of going to his body and lowering my hands and he caught me and I went to sleep. But it wasn’t his power that made him such a great fighter – and after beating me he went on to dominate the sport for a few years – it was his speed. I’d fought fast guys before, like Zab Judah, but I’d never seen anything like Pacquiao before. I’d block one shot and he’d hit me with another one as I was trying to parry still another one!.”

On who is the greater fighter, Pacquiao or Morales:

D.D: “I’d say Pacquiao, largely because of all the weight divisions he won world titles in. And the quality of fighters he defeated was very high. Morales was great too of course.”