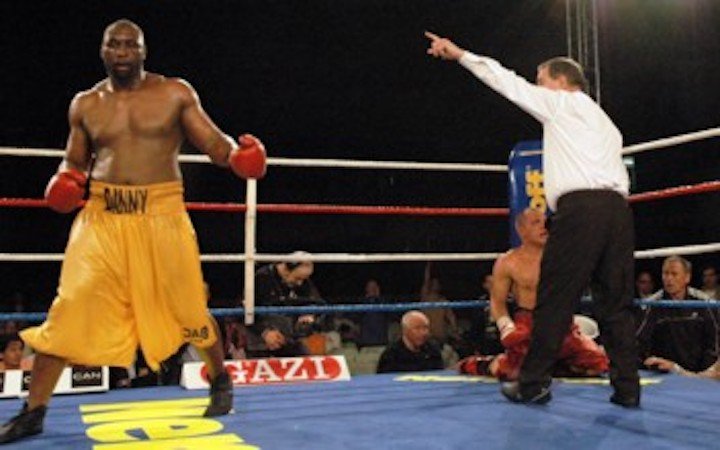 Mike Tyson will be back in action in September, in his heavily hyped exhibition bout with fellow former great Roy Jones, and Danny Williams, who scored an upset KO over Tyson way back in 2004, will see action later on this month. Williams, a man who simply cannot quit the ring, will face Joel Tambwe Djeko in a scheduled eight rounder in Belgium. The fight will go out on P-P-V – yours for just $5.

Williams, 54-28(41) and a good seven years removed from his last meaningful fight, is now 47 years of age and he has been boxing in Europe over the past few years. And Williams has mostly been losing. Williams, who once challenged Vitali Klitschko for the world heavyweight title, actually won his last fight; when he scored a first-round TKO over a guy named Mehmed Crnalic in Germany in November. Before that, “The Brixton Bomber” was stopped in a round by Kristaps Zutis, this in Riga in September of last year.

Over the last six years, Williams has gone 8-6. Overall, Williams has been stopped 15 times. For whatever reason or reasons, Williams keeps on fighting. 31 year old Djeko is a good looking 17-2-1(8) and the man from Brussels has won his last eight. However, Djeko has never beaten a heavyweight of obvious note and when he fought a 14-0 Craig Kennedy, at cruiserweight, Djeko lost a decision. Djeko’s best win is probably his December 2018 decision win over former interim WBA cruiser champ Valery Brudov.

But Djeko will almost certainly be too young, too fresh and too fast for the badly faded Williams. Still, who will want to watch this fight, much less pay for it? Williams was once a terrific fighter, one who picked up memorable wins over the likes of Tyson (a faded version), Mark Potter (Williams fighting through the pain of a dislocated shoulder and winning in sensational fashion), Kali Meehan, Michael Sprott, Audley Harrison, Matt Skelton and John McDermott.

The 2009 rematch win over McDermott was arguably Williams’ last win of any real note. Who knows what will happen in Belgium on the 28th of this month.