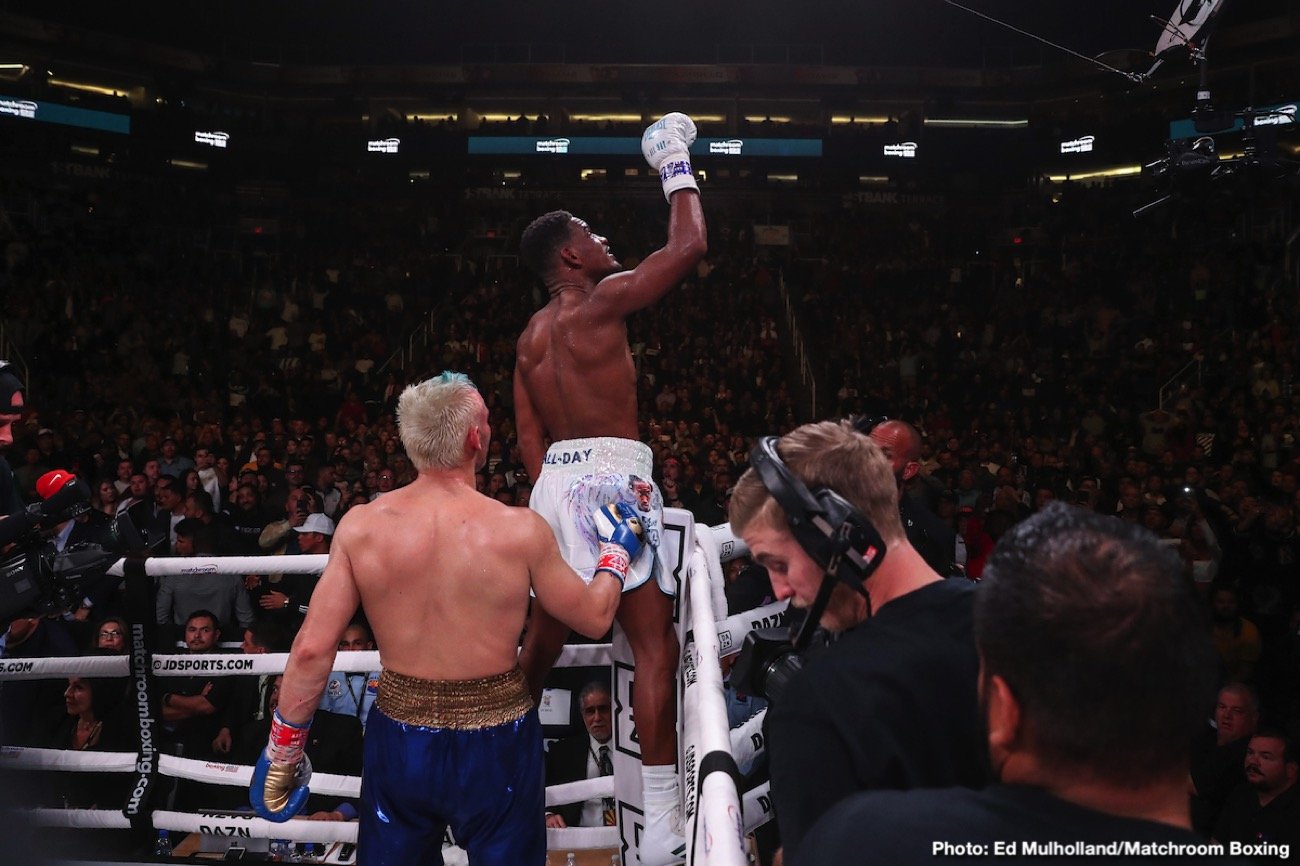 Jacobs, 33, is getting his second main event fight against a very, very beatable opponent in 34-year-old Rosado, who has a record of 2-3-1 in his last six fights. That’ not exactly the main event material, is it?

Matchroom promoter Eddie Hearn spoke of wanting to see Jacobs fight Callum Smith or John Ryder, but he made it clear that he wanted Rosado. DAZN preferred that Jacobs face Ryder, according to Mike Coppinger.

Ryder isn’t well known in the U.S, but he’s at least a top 10 contender at 168. Rosado is currently ranked #11 by the World Boxing Council at 160, but that ranking makes little sense when you look at Rosado’s 2-3-1 record in his last six fight.

Why is Jacobs fighting Rosado?

Any way you want to look at it, Rosado is doing poorly at this point in his career, and it reflects on Jacobs that he’s stooping down to fight this level of opposition in a headliner position.

It would be interesting to know why the top brass at DAZN gave Jacobs the green light to fight Rosado rather than insisting that he face someone with a better record than 25-12. There’s nothing wrong with Jacobs fighting Rosado on an undercard, but NOT in the main event. What is that?

In Jacobs’ last fight, he fought Julio Cesar Chavez Jr in a headliner fight on DAZN. The fight, if you want to call it that, turned out badly with the boxing fans furious after Chavez Jr quit in the 5th.

Julio had suffered a broken nose and didn’t wish to continue fighting. It looked more like a case of Chavez Jr being tired and not wanting to continue getting beaten up. It an unusual choice of opponent for Jacobs to pick Chavez Jr to fight because he’d already been beaten badly by Canelo Alvarez, Sergio Martinez, and Andrzej Fonfara.

‘The Miracle Man’ Jacobs had said months ago that he wanted to fight Rosado, as it was a personal thing between them. That sounds good, but it’s not a great match-up for a headliner spot on DAZN.

It’s unclear how much Jacobs is being paid for his fights on DAZN, but you can argue that they need to be a little stick with the opponents that he’s facing. If DAZN expects Canelo Alvarez to face premier level opposition, they should have the same standards for Jacobs.

“Daniel Jacobs and Gabe Rosado have agreed to fight Nov. 27 in a headline bout on DAZN, sources tell @TheAthleticBOX. Will be Jacobs’ second bout at 168 pounds. As @Idecboxing first reported. DAZN pushed for John Ryder as the opponent,” said @MikeCoppinger.

Before taking an easy fight against the completely shot Chavez Jr last December, Jacobs had fought Canelo Alvarez and Sergiy Derevyanchenko back to back. He lost to Canelo and beat Derevyanchenko by a questionable 12 round split decision.

Boxing fans would like to see Jacobs start fighting good opposition once again because it looks like he’s coasting at this point in his career. It’s not a good thing for DAZN subscribers to pay to see mismatches.

With fans paying $10 to $20 per month to subscribe to DAZN, they should see better fights than Jacobs vs. Rosado or Jacobs vs. Chavez Jr.

Rosado, 34, was beaten last year by Maciej Sulecki by a 10 round unanimous decision in March 2019. In rounds one and eight, Rosado hit the deck against Sulecki, who isn’t a big puncher.

If Jacobs wants a soft touch, he should fight the guys that beat Rosado rather than him. A rematch between Jacobs and Sulecki would be an interesting fight for boxing fans to see. Jacobs had all he could handle in beating Sulecki by a 12 round unanimous decision in October 2018. The boxing fans that remember seeing that fight saw Sulecki give Jacobs a ton of problems, and the fight was decided in the 12th round basically. What Sulecki showed in that fight was that he was roughly on the same level as Jacobs talent-wise.