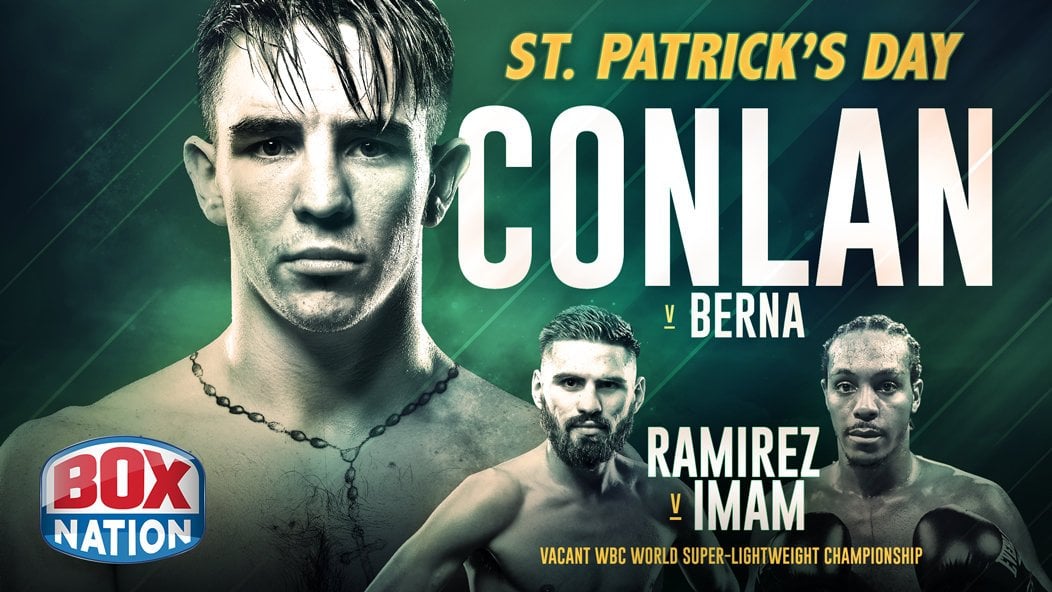 26-year-old Conlan enjoyed a successful debut year as a professional in 2017, raking up five wins from five fights, and will now return to the place where it all started on St Patrick’s Day last year, New York’s iconic Madison Square Garden.

The 2012 Olympic bronze medalist will take on the heavy handed Hungarian David Berna, who has knocked out 14 opponents in his 15 wins, and will be looking to push on again in 2018.

The rising featherweight star is aiming to continue his impressive form and put on a great fight for his fans tuning in live on BoxNation this weekend.

“I’m looking forward to another fantastic night of boxing in The Theatre at Madison Square Garden. It will be exactly one year to the day since my professional debut in the Mecca of Boxing. I’m excited and ready to put on a great show for my amazing fans,” said Conlan. “I know, like last year, thousands are travelling over from Ireland to support me for which I’m hugely grateful. There is only one place to be on St. Patrick’s Day this year, and that is The Garden!”

Conlan fights on a card headlined by light-welterweight contenders Ramirez, with a record of 25-0, 16 KOs, and Don King’s fighter Imam, 21-1, 18 KOs, who will compete for the vacant WBC world title.

Both men are renowned for the dynamite in their hands, with 25-year-old Ramirez from Avenal, California, an amateur standout and a 2012 U.S. Olympian, having stopped 76% of his opponents.

He is highly thought of by promoters Top Rank, and since pound-for-pound star Terence Crawford made the decision to move up to welterweight that has opened the gateway for a new generation of fighters to fill the gap at 140-pounds.

“I’m honoured for the opportunity to be able to fight for a world title. Since I was only eight years old, with a few amateur victories under my belt, I started dreaming of becoming a world champion. To have that green and gold belt like all the best fighters in history have. I’m living my dream,” said Ramirez. “I’m ready to work as hard as it takes, to overcome any obstacle and adversity that comes my way. I’ve sacrificed, worked, and challenged myself in a way most can’t imagine. Physically and mentally I’ll be more than ready come Saturday. I started drawing this picture 17 years ago, and I almost have it completed.”

Ramirez might be hoping he is the man for the job but New Yorker Imam, who has an even more impressive knockout percentage of 86%, including his last three fights, will be out to paint his own picture and enters this fight world-rated No. 1 by the WBC.

“I’ll have a really good opponent in front of me, and it’s going to be a good fight,” said Imam. “Fighting at Madison Square Garden, where I come from is a big thing, and it is a dream come true. I’m looking forward to it, and I’m working hard. I was ringside in Fresno for Jose’s last fight, so I know what he brings to the table. I know what I’ve got to do to win this belt. This fight will be a clash of two fighters with a lot of knockouts, and it will come down to who can stand up to that leather. If he does come straight forward, I will box and break him down and stop him. I’m not going to call for a knockout, but if it comes within itself, I am going to take advantage of it. Either way, I will leave that ring with the W.”

Jim McMunn, BoxNation Managing Director, said: “It will be a fantastic sporting weekend for the Irish starting with the Gold Cup at Cheltenham on Friday, a possible Grand Slam in the Six Nations on Saturday, all rounded off with one of their own “Fighting Irish”, Michael Conlan, as he steps into the ring at the legendary Madison Square Garden supported by Irish America on St Patrick’s Day. This is a brilliant card with some serious talent on display. Headlined by two ferocious punchers in Jose Ramirez against Amir Imam for the vacant WBC light-welterweight world title, it will be a bill that promises edge-of-the-seat action from start to finish.”

Conlan: I’ve serious work to do before I can join the party

New York’s legendary Madison Square Garden will be awash with St Patrick’s Day celebrations on Saturday but the boxing hero fans are relying on to lead the party, Michael Conlan, must remain dispassionate.

In his first fight under new trainer Adam Booth, the gifted Irish featherweight faces a significant step up in class against heavy-handed Hungarian David Berna (15-2-KO14).

Conlan (5-0-KO4) said: “You could say this is my first real test but I’m more than ready. I’ve been to the pinnacle of amateur boxing so I know what it’s like to feel the weight of a country’s hope on my shoulders.

“Berna is a good fighter so I need to be focused on that. Once the job is done, then why wouldn’t I go and celebrate victory and St Patrick’s Day with all the people who’ve spent their hard-earned money to support me?

“I’m delighted with the support. It’s been unbelievable and I’m very lucky to be Irish. Fighting on St Patrick’s Day in front of so many people cheering for me is a dream come true.”

Having excelled for his country in the unpaid ranks, Conlan is basing his professional career Stateside. In the Irish stronghold of The Big Apple, he’s already feeling at home as he prepares to fight at The Garden a third time.

Conlan added: “I’m signed to Top Rank and Bob Arum, so it’s great to have so many Irish people living in the U.S or travelling over to come and watch me fight.

“I had Conor McGregor ringwalk with me for my debut and that was nice because it was the first time. It was more of an event than a boxing match.

“Now, I don’t mind who ringwalks with me. I can stand on my own and Madison Square Garden already feels like a home from home for me.

“I’m not the kind of fighter to start picking names out and talk trash about anyone but this time next year, I want to be challenging for world titles.”