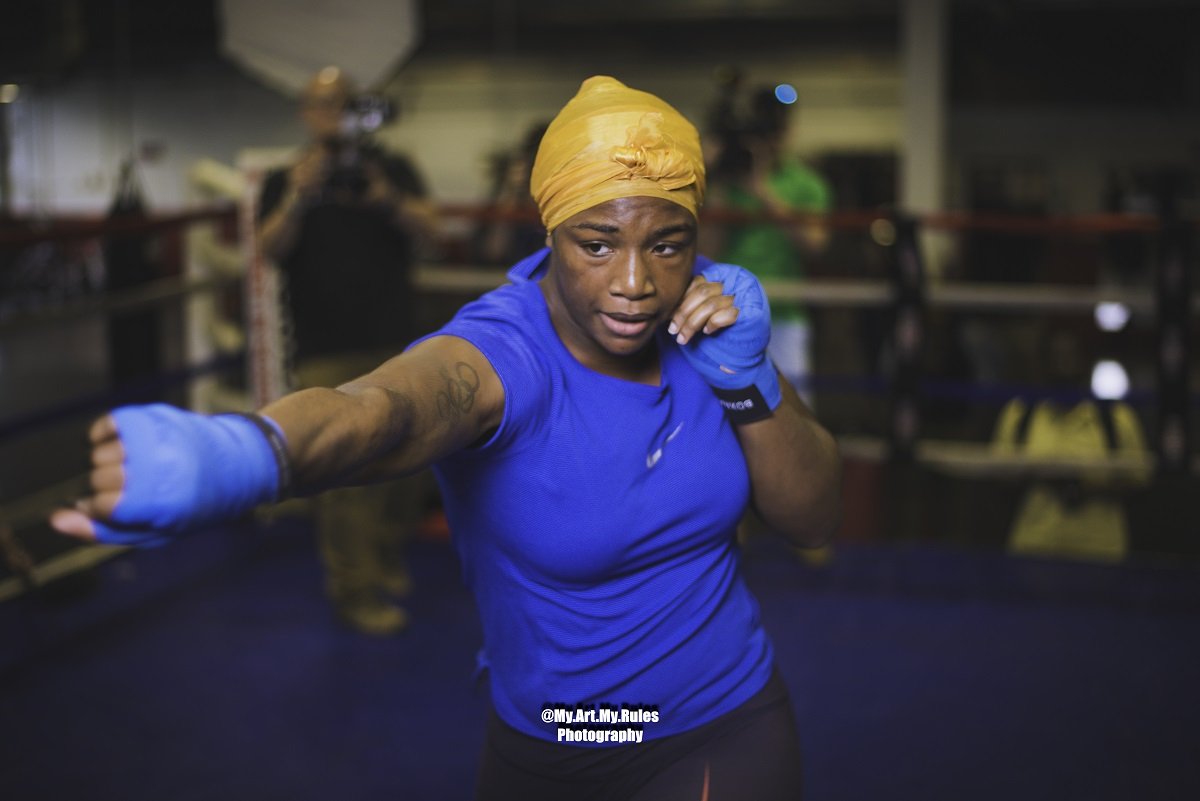 Two-time Olympic Gold Medalist and unified women’s super middleweight champion Claressa Shields worked out for the media and spoke to local youth Wednesday at The Downtown Boxing Gym in Detroit. The boxing star is two weeks into training camp ahead of her SHOWTIME BOXING: SPECIAL EDITION showdown Friday, June 22 at 10 p.m. ET/PT live on SHOWTIME from the historic Masonic Temple.

The 23-year-old Shields, who grew up in nearby Flint, will attempt to become a two-division world champion when she faces unified women’s 154-pound champion Hanna Gabriels for the vacant IBF and WBA Middleweight World Titles.

Ahead of the crucial middleweight world title fight, Shields has altered her preparations significantly. She has changed her diet, switched to renowned trainer John David Jackson and has moved her camp from Michigan to Florida.

Joining Shields at the workout on Wednesday was Dmitriy Salita, Founder of Salita Promotions. Here is what Shields and Salita had to say.

On fighting in Detroit…

“To fight in Detroit for a world title on SHOWTIME and to be mentioned with great Detroit fighters like Tommy Hearns and James Toney is incredible. Those guys are known worldwide. It shows me that I have a chance to do the same thing and bring attention to women’s boxing. That’s my goal overall – to make sure women’s boxing lives for a long time”

On moving camp to Florida…

“You really can’t deal with unnecessary distractions getting ready for big world title fights like I have been having. You want people pushing you to be better and not have people pulling you down.

“I was dealing with everybody who’s around pulling me left and right and calling me at 2, 3 o’clock in the morning. All this negative stuff that goes on in Flint that 23-year-olds are being involved in is something I can’t be involved in. That initially made me do the whole move. I have to stay focused and work hard on my goal of beating Hanna Gabriels and capturing the world title in a second division.

On training with John David Jackson…

“We’re on the same page and we’re always talking about the game plan for Hanna and what we’re going to do and what we have to work on. John doesn’t try to change my style, he just makes small adjustments to improve the good things that got me to this level. I feel great about this camp so far and I look forward to putting it all together in June.”

“Hanna is a talented world champion. I have a lot of respect for her skills and accomplishments. It takes great, competitive matches to bring women’s boxing to an elite level and that’s what I want to do. I always said that I want to fight the best. On June 22, I look forward to putting on a special performance for the fans watching the fight on SHOWTIME and those at the Masonic Temple. It’s going to be a special night and I can’t wait to capture my second division world title close to home in front of my hometown fans live on SHOWTIME.”

On being an inspiration for kids…

“Kids need to know that everything is possible. I decided to be an Olympic gold medalist at the age of 11. I did it when I was 17. How do you stay focused on one goal all that time? Take one step towards it every day, sometimes small and sometimes bigger. But, the important thing is to keep focused on your goal. If you persevere and work hard enough, truly everything is possible”

“We had a tremendous media turnout at today’s media workout at Detroit Downtown Boxing Club. It’s very special to see such support for Claressa, who’s story and success transcends boxing and is very much in line with the comeback story of Flint and Detroit – “America’s Greatest Comeback City”.

“It’s very meaningful for kids in Detroit gyms like the Downtown Boxing Club to see someone that came from a similar background and neighborhood that they did and accomplish all the amazing things that Claressa is doing. Claressa makes them see and believe that through hard work, belief and focus everything is possible. Boxing is a tool that she has mastered with which to deliver this very important message.

“June 22 is going to be one of the biggest fights of the year and one of the most meaningful and memorable moments in sports and women’s boxing.”