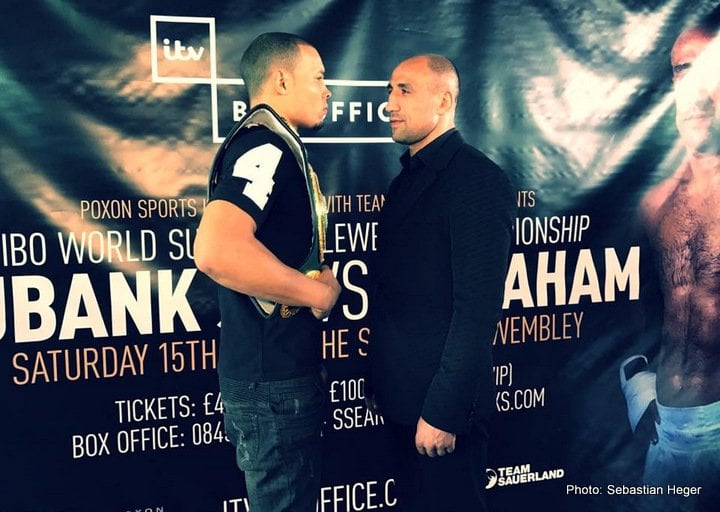 Arthur Abraham and Chris Eubank Junior came face to face today, at a press conference to officially announce their July 15 fight. The two will meet at Wembley Arena and the fight will go out on ITV Box-Office.

Abraham, aided by a translator, didn’t have too much to say other than he expects a good fight. Eubank Jr. was also respectful of his opponent, but he did fire a few shots. Eubank, who will be defending his IBO super-middleweight belt against Abraham, said the 37 year-old former champion is “one dimensional,” and upon being asked if he will attempt to make a statement by stopping Abraham (who has been stopped just once in a long career), Eubank said he “will do it, not attempt it.”

“I can’t let him see the final round,” Eubank stated.

Interestingly, Eubank said he is “not a super-middleweight,” but a natural middleweight. The once-beaten former British middleweight champ said he has taken this fight in an effort to earn himself fights with the likes of James DeGale (The Abraham fight may become an IBF final eliminator according to today’s M.C) and also to “silence one or two of the haters out there.”

Eubank believes that by taking this fight his critics will no longer be able to say he has not been tested. He also said that if the right fight comes up, he will go back down to 160. Eubank Senior was of course on hand, but the former champ said that he has “done his job” as far as getting his son to the level he is now at, and will from here on in, take a back seat in terms of the spotlight. Eubank Snr also said that “warrior” Abraham is “in danger.”

“They all are,” Eubank Snr said, in reference to the danger he believes all his son’s opponents are in when they fight him.

The July fight is certainly a good, solid match-up – but is it really pay-per-view material? It’s a big step up from Eubank’s ITV Box-Office debut, against Renold Quinlan back in February, but even this fight might not pull in anything like big numbers.

Can Eubank make good on his prediction and stop Abraham? A more likely result is a Eubank points victory.