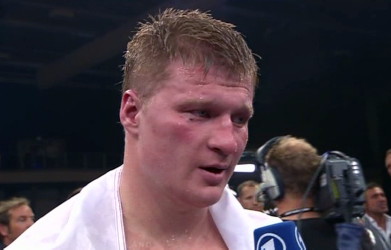 Reports say Russia’s Alexander Povetkin will return to action on July 1st. The former WBA heavyweight champion who has suffered his share of out of the ring issues – testing positive for illegal stimulants; which ruined his big fight with Deontay Wilder, set for last summer – will face Ukrainian Andriy Rudenko, 31-2(19) on a big card in Moscow.

Povetkin, 31-1(23) last boxed in December when he stopped late replacement foe Johann Duhaupas (who stepped in for Bermane Stiverne, Stiverne pulling out after Povetkin reportedly came up positive on another drugs test). It will be interesting to see how the fans will react to Povetkin now. Will fans trust the once-beaten fighter, or is his reputation forever damaged?

In terms of the fight, Rudenko, aged 33 and never stopped, is a “smallish” heavyweight as is Povetkin. Beaten only by Lucas Browne and Hughie Fury – back to back points losses in 2014/15 – Rudenko is tough, reasonably fast and he has a good chin. Rudenko is no big puncher. Povetkin is 37 now and he surely faces an uphill battle in his goal of becoming a world champion again.

Only the mighty Wladimir Klitschko has beaten Povetkin, a near-peak version of Klitschko scoring multiple knockdowns but being unable to finish off Povetkin back in October of 2013. Since then, Povetkin has reeled off a straight five wins, all these wins coming by KO. But again, has Povetkin suffered irreparable damage from his positive testing? If the Russian fans are willing to forgive their hero, Povetkin will almost certainly box at home from here on in.

A KO over Rudenko would certainly be impressive – and it is understood strict drug testing will be in place for this fight – but Povetkin may well have to go the full distance. Rudenko also boxed most recently in December, and he has won his last seven, albeit against a relatively low level of opposition.

So far no details regarding US TV coverage have emerged. Would you watch Povetkin fight again?