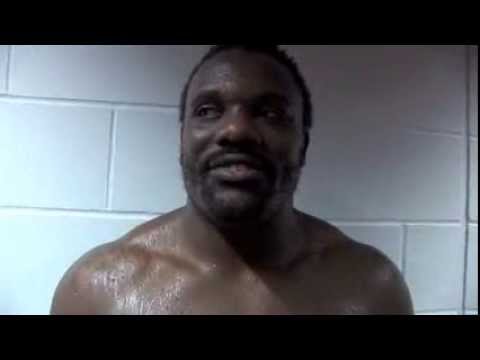 In a strange stoppage, the referee Jan Christensen pulled the plug on Ondrej Pala (32-4, 22 KO’s after he got out of position with his back turned towards WBA International heavyweight champion Dereck Chisora (19-4, 13 KO’s) giving Chisora a 3rd round TKO win at the Copper Box Arena, in London, UK.

When Pala got out of position briefly with his back turned facing Chisora in the corner, Chisora just started nailing him in the back of the head in what looked very dirty. A lot of heavyweights wouldn’t have taken advantage of the situation to land punches when their opponents back was turned to them, but Chisora went ahead and punched away and the referee stopped the fight without turning Pala around. It was very, very strange looking. Did the referee blow it by just letting Chisora hit Pala in the back of the head after he got out of position?

I guess the lesson to be learned from this fight is not to get off balance because you might get nailed in the back of the head repeatedly.

Chisora looked bad in the fight and was staggered several times by left hands from Pala. It’s difficult to imagine Chisora surviving the first three rounds if he had been facing a dangerous heavyweight with power like Deontay Wilder. The way Chisora looked tonight, he probably would have been knocked out in the 1st round had he been in with a major puncher like Deontay.

Chisora wants to fight David Price or Tyson Fury next, but neither of those fights are likely to happen soon. If not, then we could see Chisora fight some more less than impressive heavyweights like he’s been fighting in his last three fights. As bad as Chisora looked tonight, it might be the only he keeps winning because he doesn’t look like a good heavyweight right now. He’s too vulnerable.