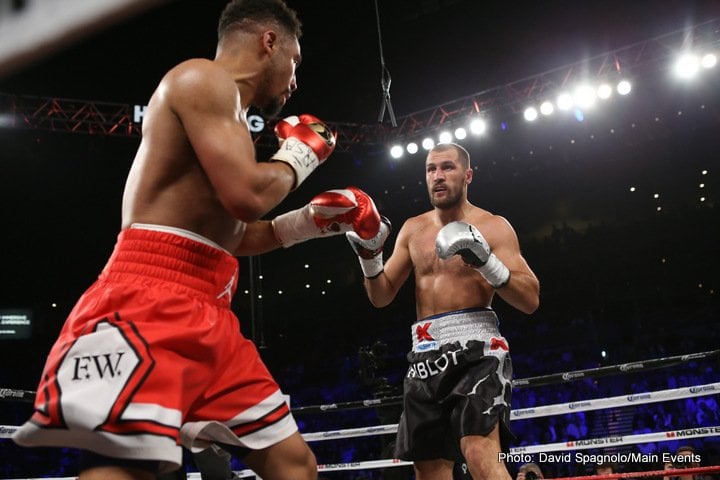 We have brought conclusion in a manner their earlier engagement did not offer us, in its bitter end. I was rather disappointed to see the fight end earlier than what I thought it should have been allowed to end. I pulled through a replay a bout to further assess the low blows which the Kovalev camp has raised to attention.

As expressed in some of my prefight analysis and commentary this fight was designed to leave better conclusion in casting light on the deserved winner. It called for further improvements to be made in their second encounter to allow the winner greater margin than what was evident in their earlier bout. I see their abilities as being well matched and the winner would be separated by the evolutionary advancement made in learning from their first engagement and applying adjustment to their revised strategy inside the fight.

Kovalev was of course the stronger fighter. He continued to put pressure on Ward but was having difficulty in nailing Ward down and creating value. His jab was more evident as a position displacer and to good effect. It was what furnished him with the marginal lead at this stage.

Ward came out in the fourth round with a notable lead hook followed by another to impress his intent on the bout. It was in this round that Ward in the previous encounter lifted his momentum. I was impressed with Ward’s focus on his in fighting, exploiting all the skirmishes to be had a close quarters to crush Kovalev’s midsection.

Ward again landed a terrific right hand on Sergey’s cranium pivoting to a solid jab. A key punch was delivered by Ward as he released a painful hook while Sergey drifted on the ropes. It was evident to me and those engaged in the bout that Ward was growing in confidence as the round wore on.

It was clear in the fifth round that Sergey was already beginning to draw heavy breathe similar to the firth round in their earlier engagement. Although he has brought in a new conditioner I suspected that this would be another issue for him to encounter in the rematch. He was still landing decent punches but it was Ward with the impressive combinations to the head and body, which drew attention to the fact that he had adjusted his gears. Sergey was still exploiting his jab and Ward was doing a slightly better job to negate its effects with body movement. I was again impressed with the notable body shots that Ward was throwing.

In the sixth round, it was clear that both fighters were looking to undertake work on the inside, an area Sergey rested in during their first bout. At times it looked like Kovalev was holding back, trying to spare his gas tank. Although Ward ended the round with some notable shots it was a Kovalev round.

The seventh begun with intense close fighting with no man willing to give ground. Ward was at work exploiting crushing body shots. He seemed content in his role as the bully, shooting to the body and ending with a hook to Kovalev’s head. He just did not allow Kovalev any room to breathe. It was here that Kovalev begun to look for referee intervention calling upon a law blow that Tony weeks ignored. He for brief moment he bent over, not protecting himself desperately looking to draw attention to the fact that he was fouled by Ward.

This was a little telling in my analysis. It was confirmation that Ward’s focussed body work was beginning to have an impact on Kovalev and his approach to fighting. Perhaps unfair but Sergey is the bigger man, the stronger man and in no way should he have allowed Ward to bully him around and the openings afforded to him already in this bout. Ward punished his efforts with a snapping right hook to the head further nullifying the effects of Sergey’s work. Definitely a Ward round.

They ran to each other at the beginning of the eight round unleashing punishment. Kovalev was doing remarkable work with his own body shots. Surprisingly Ward never moved back and sought to re-establish his preferred position right in Kovalev’s chest returning his own fire.

He landed two successive body shots which Kovalev quickly tried to draw attention to; Weeks ignored Sergey’s calls and waved the action on. Again at this point I wondered why Kovalev kept looking to Weeks to intervene in the body shots which were seemingly breaking him down. After several replays I would call these borderline blows, there was not enough in the to call off the action. What troubles me in the supposed bully looking for a break from the referee and allowing his opponent to see an area of weakness.

Actioned continued and Ward landed a terrible right hand, shaking Kovalev’s core. Kovalev was hurt by Ward and was surfing mildly dizzy spells. He was in clear danger and was trying to smoother Ward’s advances,who was quick to inflict more body shots upon his unstable opponent. With all that time remaining on the clock it looked like Ward was destined to get the very unlikely knock out. Kovalev was hurt, even his attempts to hold Ward and catch his breath were in vain for he was reduced to back pedalling – trying to steer away from the advancing Ward who was already landing unanswered blows.

Ward pinned Kovalev against not allowing any escape route and focussed on the body, landing what I saw as one borderline blow followed by clear low blow. At this stage the gasping Kovalev was hunched over not defending himself as Weeks approached him and waved off the action. However this caught us by surprise; Sergey was definitely in trouble and en-route to a likely knock out but this was a premature stoppage.

I think Weeks made a bad judgement in his call. Kovalev was hurt but was clearly able to continue. Sergey was losing on my cards but I think he deserved an opportunity to attempt to recover but even upon saying that I feel for Andre Ward who should have been given the benefit of ending the bout with a more definitive finish which he was fully capable of. I fault Weeks for his call but I have to admit that Andre Ward made the better adjustment before this bout and also in its execution, which was the aspect that proved a source of competitive advantage.

I foresaw a victory for Ward via decision and am surprised at his ability to hurt Sergey Kovalev as he did. This fight did not end in the manner I would have preferred and for some, controversy will still reign however we have to be honest that tonight Ward was the better fighter. This is boxing, this is our home.