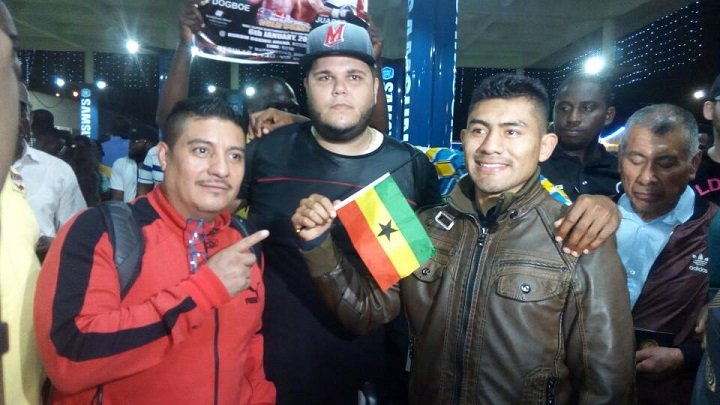 Ghana’s Isaac ‘Royal Storm’ Dogboe is in a big trouble come next Saturday, January 6, 2018 that is if you believe the words of Mexican slugger, Cesar Juarez who has been talking tough on arrival in Accra on Friday night, more than a week before fight night.

Juarez (20-5, 15 KOs) is here to face the undefeated Dogboe (17-0, 11 KOs) in a final eliminator for the WBO super bantamweight world title, with the highly revered WBO interim world championship also at stake at the Bukom Boxing Arena.

The Rising Stars Africa Promotions ran by Dogboe’s father and trainer, Paul won the bid to stage the big fight in the Ghanaian capital between the WBO number 1 and number 2 ranked junior featherweights with the winner assured of a match-up against world champion in the same division, American Jesse Magdaleno next.

It is an opportunity Juarez who lost via a unanimous decision to highly rated Filipino, Nonito Donaire in a bid for the same WBO super bantamweight belt back in December 2015 is keen to grab with both fists. It’s his first fight in Africa, but the former world title challenger insists he is got the armoury enough to take down the equally highly rated African on his own turf.

“I fought against Nonito Donaire, a monster in the ring. Dogboe is good, he’s young and very strong but I will show him in the ring that I’ve met better boxers,” the 25 year old Juarez minced no words in the midst of intimidating Ghanaian supporters of Dogboe at the very crowded airport.

Juarez is not only promising victory on fight night, the 26 year old Mexican has even more daringly stated that he will win via knockout against the 23 year old Ghanaian who has never tasted defeat.

“Yes I will win by knockout, maybe round 8 or 10, I don’t know but I will stop him,” Juarez said confidently way before the 12-round contest.

“I’ve watched a few of his videos on YouTube. Dogboe is fast, he’s strong but I am ready for him. He has never faced a real Mexican boxer like me before,” Cesar Juarez added full of poise.