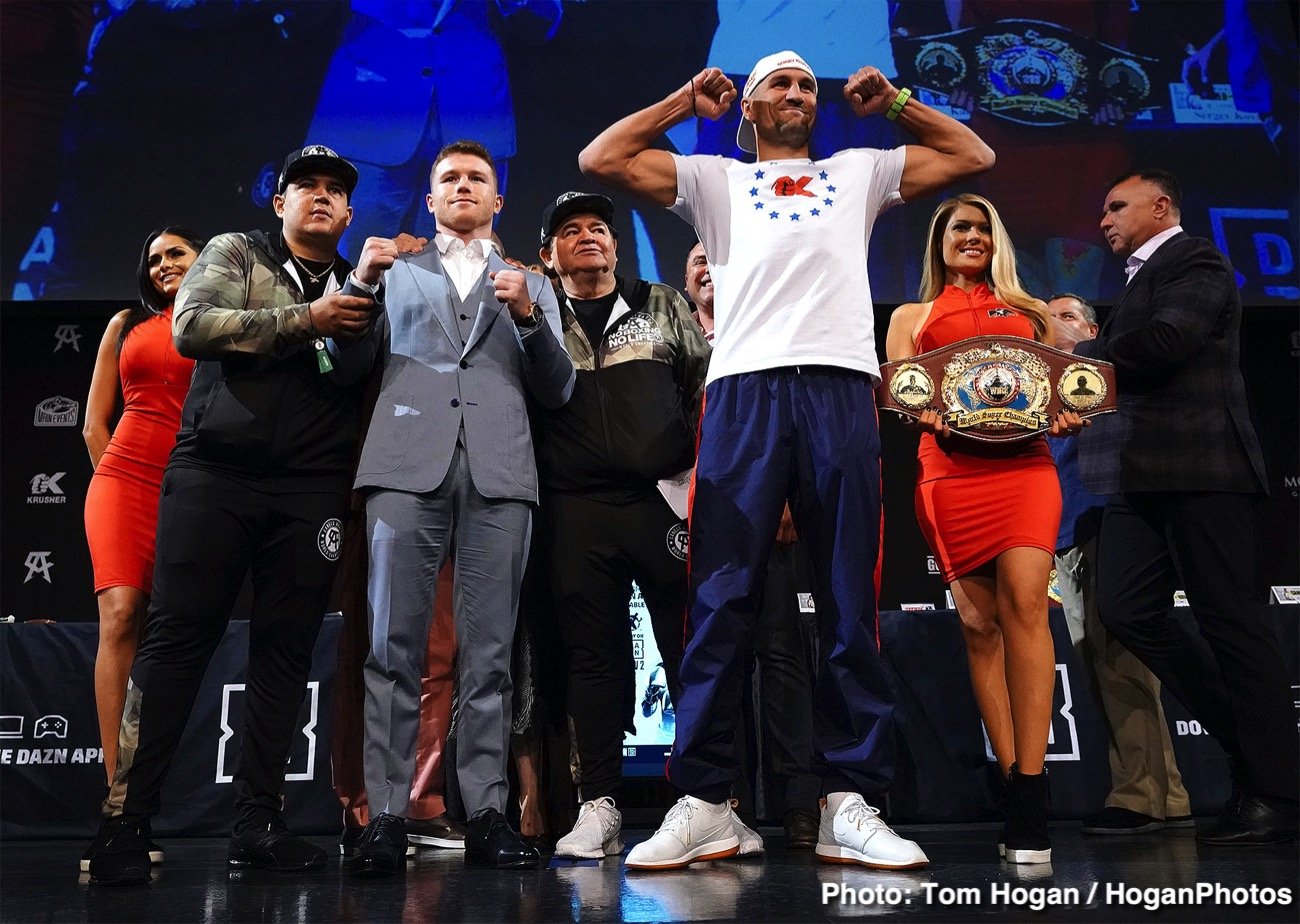 Whichever way you look at it, this Saturday night’s fight in Las Vegas between defending WBO light-heavyweight champ Sergey Kovalev and middleweight challenger Canelo Alvarez is a very interesting fight; a fight plenty of people are talking about. But how are you looking at it: as a sure win for Canelo, who has “hand-picked,” or if you prefer, “cherry-picked” the easiest (oldest) of the current 175 pound champions, or as a genuinely tough fight to pick a winner from; a 50/50 fight?

There is no doubt Kovalev, 34-3-1(29) and 36 years of age, has seen better days, yet the Russian remains a formidable fighter, a clever boxer who uses his brain to fine effect in the ring. And of course he is the naturally bigger, more powerful man. Canelo has youth on his side and everyone knows all about Kovalev’s dislike for a hard shot to the body – body punching being one of Canelo’s strongest weapons/assets.

Still, some experts have stated how Canelo, 52-1-2(35) has bulked up in weight too much for the fight, that his added 20 or so pounds will slow him down and allow the naturally slower Kovalev to reach him and hit and hurt him. Will Canelo go for the KO, or will he look to bag rounds and win a decision? Will Kovalev look to jump right on Canelo and hurt him early, show him who’s boss?

We fight fans have been treated to a string of great fights, Fight of The Year material each of them, these past few weeks – Errol Spence-Shawn Porter, Gennady Golovkin-Sergiy Derevyanchenko and Josh Taylor-Regis Prograis – and it could be that we are in store for another classic on Saturday night.

And after the intriguing fight is done and dusted, more questions will be asked: if Canelo wins, will he stay at 175, and will he look to fight the other light-heavyweight champions? If Kovalev wins, will there be a rematch? Will other fighters (Gennady Golovkin) look to move up and try and succeed where Canelo failed?

So who does win on Saturday? The pick here is Canelo, by late stoppage. But this pick is not made with any real certainty.

Some of the greats who moved up from 160 to go for a light-heavyweight crown:

Sugar Ray Robinson. The greatest of them all, and yet he failed to win the 175 pound title. Stopped by Joey Maxim (and the blistering over 100-degree heat), Sugar Ray was retired on his stool when way ahead on points in 1952.

Thomas Hearns. Hearns won legit versions of the light-heavyweight title twice, yet in his first attempt at winning 175 pound glory Hearns did things the other way around – he went up to 175, beat Dennis Andries in 1987 and then dropped back down to win the middleweight title that same year. Hearns defeated Virgil Hill in 1991 to become a two-time 175 pound champ.

Sugar Ray Leonard. The man who invented modern day catch-weight fights? To a degree at least. Leonard had defending light-heavyweight titlist Donny Lalonde drop down to 168 pounds for their 1988 fight, won by Sugar Ray via violent KO.