The SHOWTIME CHAMPIONSHIP BOXING telecast will also feature top 140-pounders Alberto Puello and Batyr Akhmedov squaring off for the vacant WBA Super Lightweight World Championship in the co-main event and WBA Super Featherweight World Champion Roger Gutierrez defending his title against unbeaten Hector Garcia. In the telecast opener, Brandun Lee, one of the sport’s most exciting prospects and biggest punchers, will take on Will Madera in a 10-round super lightweight bout opening a loaded four-fight telecast that begins live at 8 p.m. ET/5 p.m. PT. 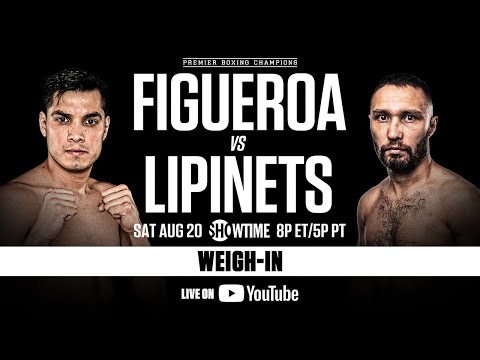 Four-division world champion Adrien Broner pulled out of the previously scheduled match against Figueroa, citing personal issues in advance of the fight.

“Man, I’m going [through] a lot at this moment in my life, but I ain’t gonna give up. I set some more goals and I finish what I started but sorry to say this, but I’m not fighting August 20,” Broner said in an Instagram post. “Sorry to all my fans but Mental Health is real and I’m not about to play inside the ring … So, I have to step back and overcome this obstacle before I go put my life on the line inside the square circle again. I know I’m far from being finished with the sport SEE Y’ALL SOON.’’

The 32-year-old Figueroa (28-2-1, 19 KOs) is from a fighting family along with his younger brother Brandon, a former super bantamweight world champion. Figueroa won the WBC Lightweight World Championship with a unanimous decision victory over Nihito Arakawa in a 2013 “Fight of the Year” and successfully defended the title two times before moving up to super lightweight in 2015. Figueroa has also fought at welterweight, earning action-packed victories over Robert Guerrero, John Molina Jr., and Antonio DeMarco. He’ll move back down to super lightweight on August 20 after back-to-back defeats against Yordenis Ugas and Abel Ramos. His match against Lipinets is a classic crossroads fight. 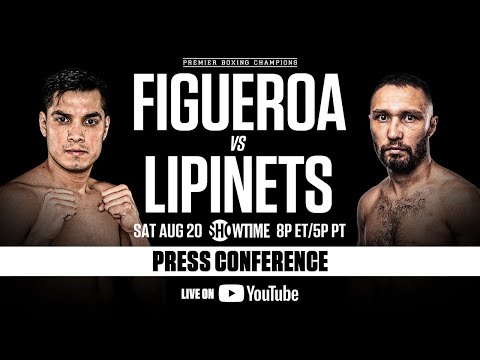 “This is going to be a great fight against Lipinets and I hope he’s ready for what I’m bringing,” said Figueroa. “I’ve made changes in my life and I’m excited to see the kind of fighter that I am now. I’m going to show what I can do now that I have a clear head and a clear path ahead of me. With the opponent change I’m even more ready to take all the frustrations and anger that have built up in camp and bring it into the ring on Saturday and come out victorious.”

Lipinets (16-2-1, 12 KOs) has been in training and was already scheduled to appear on the August 20 card before being elevated as a replacement for Broner in the main event. Born in Martuk, Kazakhstan and now living in Woodland Hills, Calif., Lipinets is no stranger to the main stage, having tangled with champions including Lamont Peterson and Mikey Garcia. The 33-year-old defeated Akhiro Kondo for the IBF super lightweight title in 2017 and lost the title to Garcia by unanimous decision in 2018. He is coming off a loss to Jaron Ennis in a welterweight title in April 2021.

“We’ve actually been in camp for almost three months getting ready for whoever they put in front of me,” said Lipinets. “We’ve been training with no particular opponent in mind. There have been a few different guys that have said they wanted to fight me. So, we’ve been sparring with and preparing for all types of styles. And now we get this great news that I get to fight Figueroa this Saturday. I can’t wait to show everyone that I’m still a force to be reckoned with at 140 pounds.”

Here is what the fighters had to say Thursday from Hard Rock Live at Seminole Hard Rock Hotel & Casino:

“Obviously we were preparing for a certain style, but the fight fell through, so I just have to take all my experience and the things I’ve learned all these years and apply it toward Sergey. He’s no pushover and he’s a former world champion. We know we have our hands full.

“I’ve been a fighter for 27 years now, and the sport hasn’t always been the nicest to me. We all know about my mental health struggles, but for the first time I got to enjoy training camp. I got to enjoy dealing with all that a training camp provides. If this is my last fight, I’d be happy with that. But I know I’m not done, and I have a lot left in the tank. I love this sport too much and there’s not anything else that would fulfill me the same. I’m excited for Saturday. I’m pumped like I’ve never been before. I finally got to enjoy myself and I think I’m going to enjoy Saturday night. I’m looking forward to a war with Lipinets.

“We have seen some video of him. It hasn’t been hard to find. So we know more or less what to expect.

“I have no problem with Broner not taking the fight because of mental health. I’m trying to advocate and get more people to take care of their mental health. But for him to use it as cop out, that’s what annoyed me.

“With anyone struggling with their mental health, the most important thing is to reach out to a friend or neighbor and know that you’re not alone. Life’s not easy. It’s a constant struggle and an everyday battle. We have to stay strong and rely on each other and have each other’s back. Just love each other and that’s the best we can do.”

“I first want to thank Omar, and Broner, for making this happen. These things happen and sometimes there are pull-outs at the last moment. We were getting ready for whatever comes. We’re ready and we just want to show the best fight for the fans of boxing.

“My last loss [to Jaron Ennis] was at 147 pounds, so I’m going back to 140 and I want to be world champion again and show that I’m a force to be reckoned with.

“We just made a decision as a team and realized that 147 was not right for me. I’m more comfortable at 140 and made weight no problem. We had a great camp and had different opponents thrown at us and at the end of the day, I feel great. It took some time and I’ve had many different opponents thrown at me. It’s been frustrating at times but I never complained and I knew that hard work always pays off.

“I want to thank my whole team and everyone who is here today. Becoming a world champion on Saturday night would mean so much to me.

“A win would change my life forever and change my family’s life forever. It would just mean so much to me. Becoming a world champion would be life-altering.

“If he’s so confident and he thinks he’s going to beat me, then let’s do it. That’s why we’re fighting on Saturday.

“There’s no doubt that Hector Garcia and I are going to win on Saturday. It will be a great victory for our families, for ourselves and for the Dominican Republic. It will be a time to celebrate and a day to never forget.”

“First of all, I want to say thank you so much to SHOWTIME for this opportunity. For me, this is a really important fight for my career and winning a world title would be a huge deal.

“The first time I fought for a world title, I thought I was robbed of a decision. I believe I won that fight.

“Nothing will stop me this time in this fight. It doesn’t matter who’s against me – King Kong could step into the ring against me, and it wouldn’t matter.

“Just make 140 pounds and meet me in the ring and I’ll be ready to fight.

“It doesn’t matter what Garcia says. Every boxer has to have that mentality. I’m ready to show that I can beat him. He can’t look past me.

“I respect him as a fighter, I respect all fighters. I know he’s confident because he just beat Chris Colbert. I’m confident too and I’m ready.

“The year layoff doesn’t affect me at all. When I fought for the world title, that was also a one-year layoff. You saw what happened there. It probably helped me. I feel great and you’re going to see on Saturday night.

“Garcia and Chris Colbert had a great fight. Garcia did his thing. I don’t want to take anything away from him, but I think anyone that night would have beaten Colbert. Colbert was overconfident. Once his fight against me got postponed, he overlooked Garcia. That’s what hurt him.

“I don’t base myself on just one thing. I know the statistics show that I’m powerful, but I bring a lot of things to the ring. My focus is on Saturday night. Our goal is to win round by round, but if the opportunity for a knockout comes, I’m ready to take it.”

“I’m going to prove the oddsmakers wrong again. That motivates me to do better in the ring and to become a champion. I want to be that man Saturday night. I want to win.

“I want to be a world champion. This is my opportunity. I have always had confidence in myself. When I beat Chris Colbert, my confidence grew even more, so I believe in myself now more than ever.

“Alberto Puello and I are old friends. We’ve been friends since we were younger and came from the same town in the Dominican Republic. We’ve both had pretty good careers. If he wins, I’m going to be happy and if I win, he’ll be happy. It’s all love. Both of us winning titles would be something great for each of us personally and for our families and then for our country. We know we have a whole country behind us, and we want to do it for them and for ourselves.”

“My last fight showed me I can go 10 rounds strong. I never really deteriorated throughout the fight and there was never a question that I could be strong from Round 1 to Round 10.

“I never overlook my opponent because at the end of the day, he has two hands and you have to respect anyone that steps in the ring. I’m going to go in there and do what I do, which is get the knockout. So today I’m 25-0 and come Saturday night it will be 26-0.

“I just have to keep doing what I’ve been doing. I have to go in there with a brain, don’t be dumb and look for the knockout right away. If it comes, it comes. I’ve already gone 10 rounds and I have no problem going another 10. Just be smart.

“I love being here on SHOWTIME. Every time I come near SHOWTIME they give me the full red carpet experience and I just really appreciate everything that SHOWTIME has done for me.”

“I plan on showing that I’m the veteran fighter on Saturday night. Tune in and I’ll show you what I can do. I feel they’re overlooking me because I’m coming up from lightweight, so I’m a smaller guy naturally. I’ve been overlooked in most of my fights.

“Being the underdog is something I look forward to. Upsetting opponents is my thing.
I’m going to steal the show, so tune in Saturday night and don’t miss the first bell.

“Brandun Lee is a strong, young, up-and-coming-fighter. I expect him to come in strong, especially early in the fight.

“This is the second time I’m fighting at 140. I do feel more comfortable at 140 but this is all about the opportunity here. This is going to be a firefight.

Tickets for the live event are on sale now and can be purchased at Ticketmaster.com.