Arum felt that Crawford, with his superior power and skill set, would be too much for the 33-year-old Porter, who has been through a lot of ring wars over the last seven years of his career against Errol Spence Jr., Yordenis Ugas, Danny Garcia, Keith Thurman, and Kell Brook.

Despite Crawford’s contract with Top Rank having expired with his fight against former IBF/WBC welterweight champion Porter, Arum says he wants to set up a battle for Terence against the unbeaten two-belt 147-lb champion Spence (27-0, 21 KOs) or undisputed 140-lb champion Josh Taylor next.

Spence is the #1 option that Arum will be looking to make for Crawford, but if he can’t make that fight, Taylor (19-0, 13 KOs) will be the backup plan.

Crawford seemed upset with Arum at the post-fight press conference, letting the media know that he’s moving on from Top Rank after they failed in setting up a fight with Spence. Arum has tried to make the Crawford-Spence fight, but there hasn’t been the same interest on Errol’s side.

However, it doesn’t look like Arum believes that it’s over with. He sounds like he’s going to continue to work hard to try and set up the Spence fight for Terence, and if not him, Taylor.

“It was a terrific fight. Porter is a hell of a fighter, and he’s a really tough fighter to fight,” said Bob Arum of Top Rank to Fight Hub TV in reacting to Crawford’s 10th round knockout win over Shawn Porter.

“Terence has a tremendous skill set that gave him the extra oomph at the end to knock him out. He was ahead on the scorecards, but it was a really interesting fight.

“But Terence was going to get to him at a certain point because he’s the crisper, harder puncher,” Arum continued on Crawford’s impressive knockout win over the 33-year-old former IBF/WBC welterweight champion Porter.

“I think Terence has the better skill set. Porter is a very courageous guy and is very strong, but Terence is the better boxer,” said Arum.

Porter didn’t possess the power or the arm length to contend with Crawford last Saturday night.

As a result, Crawford was able to sit back and wait for the shorter-armed Porter to charge forward to pick him off with punches.

Although Porter’s dad/trainer Kenny Porter received flak from boxing fans for pulling him out in the tenth round after he’d been knocked down twice by Crawford, it was the right decision.

Porter didn’t have a chance to pull out the victory at that stage of the fight, and he would have been in deep trouble had the contest been allowed to continue. By the tenth, Porter was tired and had nothing left on his punches.

In contrast, Crawford looked like he was warming up and was hitting Porter with powerful shots that had knockout written all over them.

As Kenny Porter stated, Shawn could no longer protect himself by the tenth round, meaning he had no choice but to pull him out to defend him.

“I certainly will,” Arum said when asked if he’ll contact Al Haymon of PBC to attempt to put a fight together between Crawford and IBF/WBC welterweight champion Errol ‘The Truth’ Spence Jr. next.

“I have no idea,” Arum said when asked ‘How likely’ he can put together a fight between Spence and Crawford. “From Terence’s side, he’d love to do the fight.

“That’s a possibility also. You always have to have options,” Arum said when asked if undisputed light welterweight champion Josh Taylor is an option for Crawford’s next fight. “Taylor was here tonight, and it’s a good fight; Taylor is a hell of a fighter,” said Arum.

Either one of those guys, Spence or Taylor, will be ideal for Crawford’s next fight, but we’ll have to see if Arum can work his magic to set up the bouts for Terence. 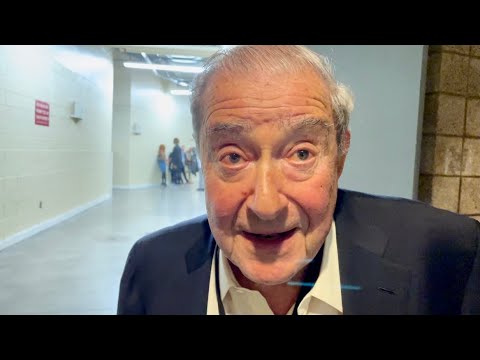 4 thoughts on “Bob Arum reacts to Crawford win over Porter, wants to match Terence against Spence or Taylor next”