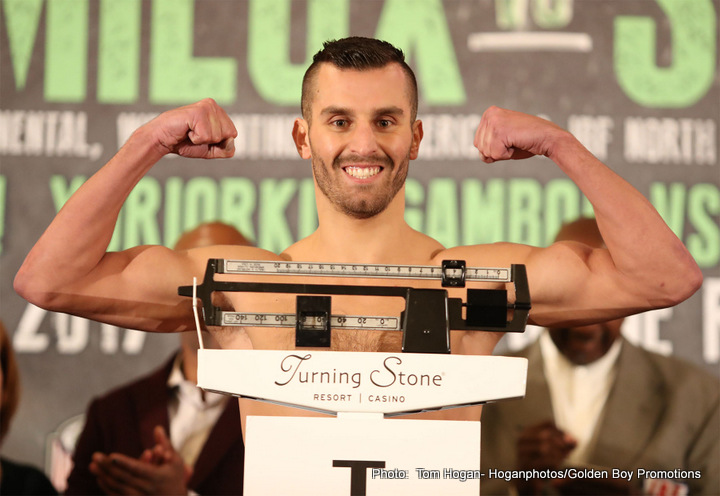 Various reports (including one via Dan Rafael of ESPN) say Billy Joe Saunders and David Lemieux will fight in Canada on December 16, the two having reached an agreement that rules out the need for the WBO-ordered fight to go to purse bids.

An excellent fight and a superb match-up, the WBO middleweight title fight will further add to what is shaping up as a great end to the year’s boxing calendar. Saunders, unbeaten and craving the big, big fights for some time, must be commended for agreeing to travel to Lemieux’s Canadian fortress to take this fight, while power-puncher Lemieux must now figure out Saunders’ effective boxing style and land his big bombs.

A dull fight this one will not be and the winner will be in an even better position, with huge fights against the likes of GGG and Canelo a real possibility for next year. But this is getting too far ahead: who actually wins between Saunders, 25-0(12) and the 38-3(33) Lemieux?

Saunders, by his own admission, needs the big fights to bring out his best and he has (again by his own admission) not looked great in his recent fights; winning fairly dull decisions over Artur Akavov and, last time out in September, Willie Monroe Junior. Saunders will have to up his game against Lemieux, but this is the point: many people feel BJS can and will let it all out in this and future big fights (if he wins).

Lemieux, the same age as the southpaw champion at 28, has delivered far more electrifying performances here in 2017 – at least the lights-out KO of The Year candidate he scored over Curtis Stevens in March was electrifying; not so much the points win Lemieux scored over Marcos Reyes in his most recent outing in May.

The upcoming December clash can be looked at as a Boxer Vs. Puncher match-up, but Saunders the boxer can also punch, and Lemieux the puncher can also box. Again, it’s a great fight. Who wins? At least three or four possible scenarios can be envisaged with this one.