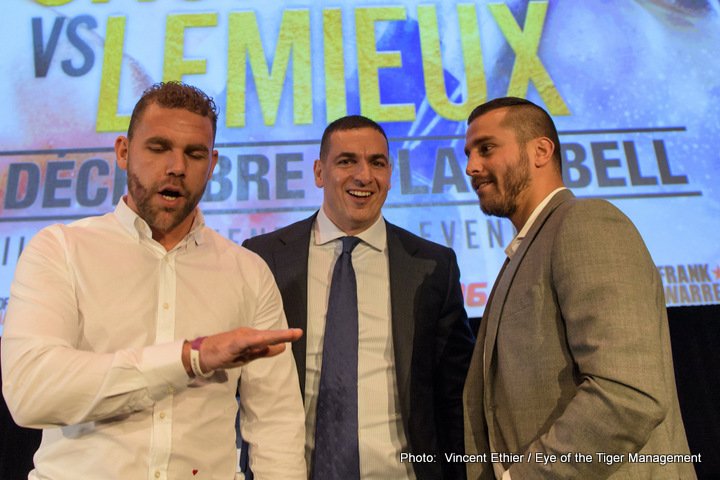 Billy Joe Saunders, the unbeaten WBO middleweight ruler, has a tough assignment to come through in December, against proven power-puncher David Lemieux – but already the gifted southpaw is looking at other massive fights.

Speaking with Sky Sports, BJS said he accepts the challenge of Danny Jacobs – who will be at ringside in Canada to watch the hugely intriguing and tough-to-pick Saunders-Lemieux clash (clash, as in clash of styles and personalities) – Saunders adding how he is willing to go to New York for the fight. Once again though, Saunders made it clear that the man he really wants to fight is world champ Gennady Golovkin.

“He doesn’t need to challenge me, because put the right deal in front of me and I’ll take it. No problem,” Saunders told Sky Sports on the subject of Jacobs. “I’ll go to New York or we’ll do it in England. His promoter now, Eddie Hearn, is obviously British-based so we can do it here if it makes sense, or we can do it in America. I’m not bothered where we do it. I congratulated him on his win (over Luis Arias) and I look forward to the biggest test. If he’s the biggest test I can get then so be it.”

Many fans would probably say the biggest test Saunders could get right now is the one he has right in front of him: the potential war with the lethal-hitting Lemieux. But Saunders insists he fears no man and if he gets past Lemieux next month it would be great to see him in there with the absolute best: Jacobs and GGG most notably. For what seems like the longest time Saunders has been calling for the big, big fights and fans everywhere want to see if he can live up to his own words.

Starting with the Lemieux fight, Saunders will win over these fans providing he does the business. And then, should he take on and beat Jacobs, who knows – BJS could get the ultimate fight: one with Triple-G.

“I rate myself as the best middleweight,” Saunders stated. “I know that Golovkin’s extremely good, I really do rate him. I respect him as a fighter, but I believe I’ve got something that could antagonise him and I want to put that on display.”

First, BJS has to put his best skills on display to overcome the challenge of Lemieux. He will very likely need them if he’s to win.