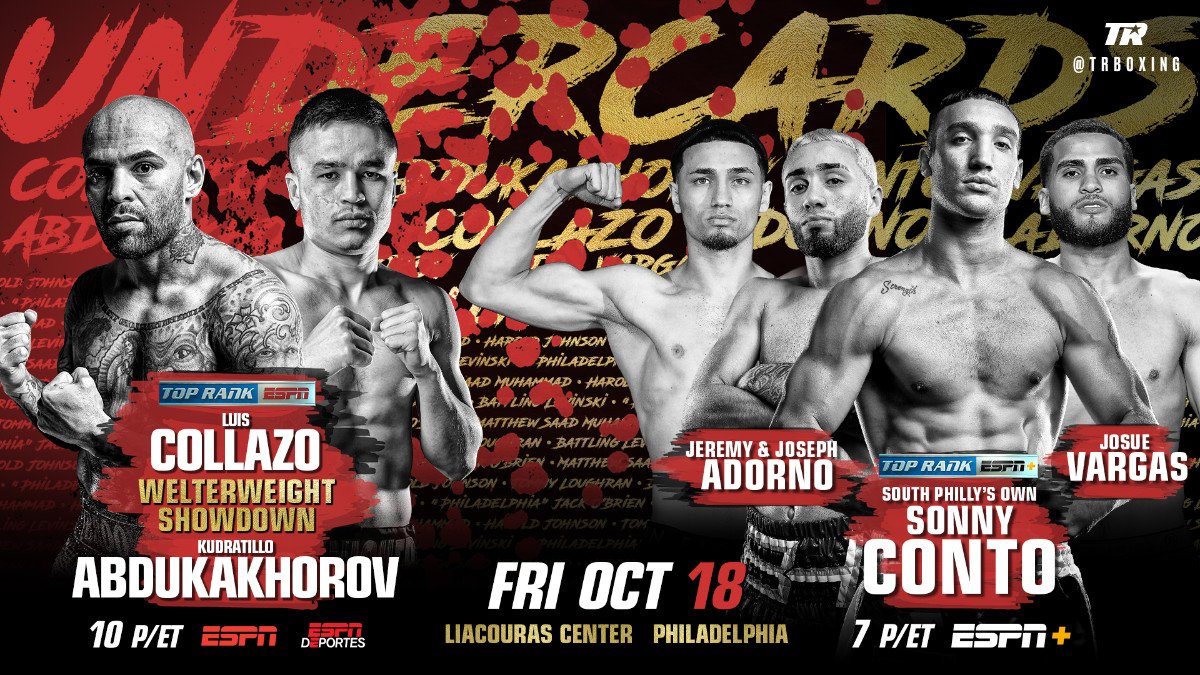 Former world champion Luis Collazo will take on IBF No. 1 contender Kudratillo “The Punisher” Abdukakhorov in a 10-rounder with potential world title implications.

Collazo-Abdukakhorov will be televised live on ESPN and ESPN Deportes immediately preceding Beterbiev-Gvozdyk at 10 p.m. ET, while the undercard will stream on ESPN+, the leading multi-sport streaming service, beginning at 7 p.m. ET.

“This is a fight that will deliver action and a top contender in the talent-rich welterweight division,” said Top Rank chairman Bob Arum. “Collazo-Abdukakhorov is a great complement to Beterbiev-Gvozdyk, and it’s only fitting that a card like this is coming to the great fighting city of Philadelphia.”

“I’m just ready to go. The Jose Benavidez Jr. fight didn’t happen because he was hurt or whatever, but trust me, you are going to see an incredible performance that will steal the show on October 18,” Collazo said. “I’m coming for everything. It’s now or never. I can’t wait to show out in the great city of Philadelphia.”

Abdukakhorov wants to showcase his talent against Collazo

“And I would like to thank Top Rank for giving me this opportunity to fight a great former champion,” Abdukakhorov said. “I am looking forward to showcasing my talent to the world. This will be a great fight, as Luis Collazo is someone who comes and gives 100 percent every fight and his aggressive style is adored by many fans.

“He [Collazo] has the heart of a true warrior. I do believe his age will be a factor, and I will try to capitalize on it. I am coming to this fight with every intention of beating him to cement my status as the mandatory for the IBF world title.”

Collazo (39-7, 20 KOs), the 38-year-old Brooklyn native who held a piece of the welterweight title from 2005-2006, is seeking one last crack at the brass ring. He has won three in a row since a 2015 KO loss to Keith Thurman, whom he hurt with a body shot and nearly knocked down.

He is closing in on two decades as a pro and holds victories over the likes of Jose Antonio Rivera and Victor Ortiz. Most recently, he earned a split decision verdict over Samuel Vargas. Abdukakhorov (16-0, 9 KOs) earned the IBF No 1 ranking with a unanimous decision over Keita Obara March 30 in Philadelphia. A road warrior who was born in Uzbekistan, Abdukakhorov has fought in Uzbekistan, Singapore, Malaysia, Russia and the U.S.

In other Beterbiev vs. Gvozdyk undercard action:

Promoted by Top Rank, in association with Peltz Boxing, tickets priced at $150, $90, $75 and $50 (not including applicable fees) are on sale now and can be purchased at the Liacouras Center Box Office, www.liacourascenter.com or charge by phone at 800-298-4200.

Being a World Champion is one thing, but to Light Heavyweight titleholder Artur Beterbiev, unifying those crowns is the ultimate goal.#BeterbievNail | Oct. 18 | @ESPN pic.twitter.com/OORcNLBhpy