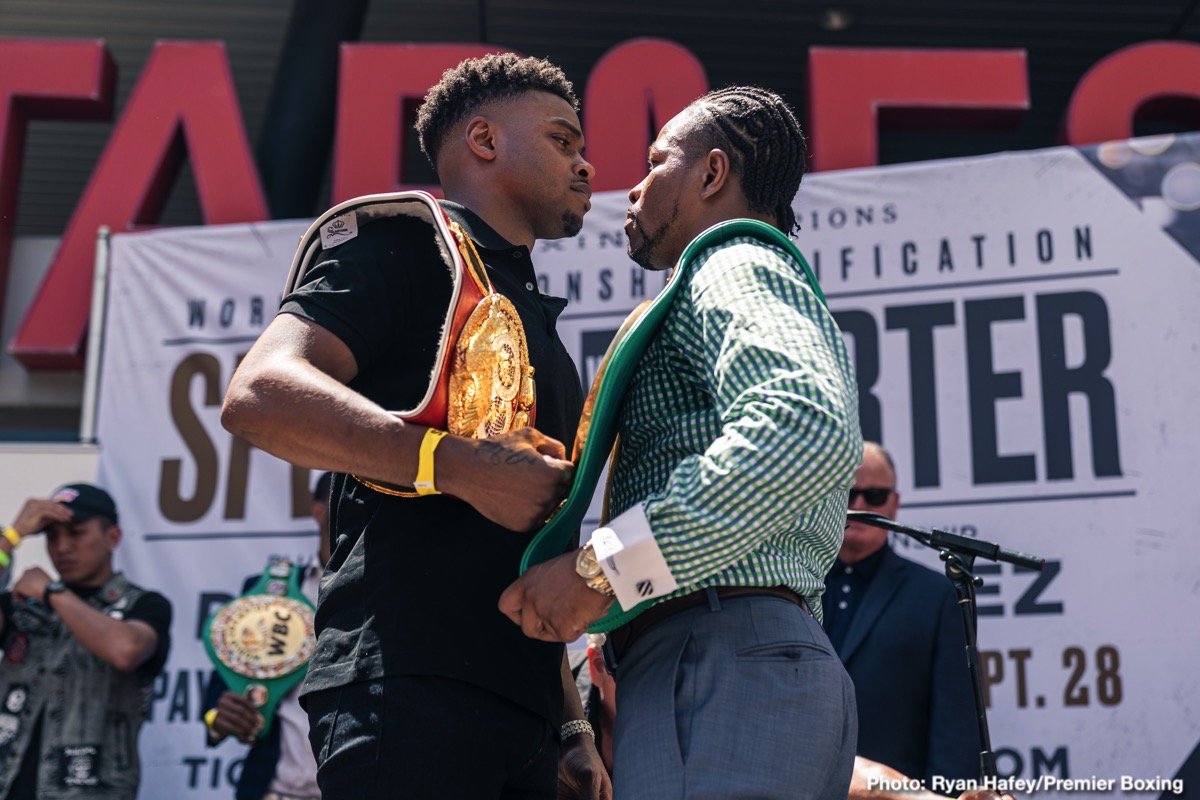 Amongst the fighters, legends and trainers surveyed, 15 picked the unbeaten Spence to walk away victorious, while 11 favor Porter to end the night as a unified champion. Here is what the fighters and trainers had to say about this blockbuster showdown:

Manny Pacquiao, WBA Welterweight World Champion
Spence W 12: It’s going to be a good fight, a close fight, but I think Spence will win. It’s not gonna be one-sided fight, it’s gonna be a competitive fight. The fans will be treated to a once-in-a-lifetime experience in this fight.

Deontay Wilder, WBC Heavyweight World Champion
Spence UD 12: Errol Spence and Shawn Porter is a clash of styles that makes for an exciting, high-profile unification fight. Errol’s trying to be ruler of the division with a statement win, so I expect him to come out and perform.

Shawn’s going to come for the full 12 rounds, no matter what. Errol’s never fought anyone like that, which makes this so intriguing. But I see Errol as being the best in the division, hands down, and I’m picking him by unanimous decision. I don’t see him knocking Shawn out.

Andy Ruiz Jr., Unified Heavyweight World Champion
Porter SD 12: I’ve trained-practically grown up-with Shawn Porter, who has a difficult style. Errol Spence is a great fighter and Shawn’s the underdog, but I was the underdog against Anthony Joshua and we all know what happened there.

Shawn’s probably gonna have to be rough in there and stay on the inside, but I expect him to do it and win a decision.

Andy Ruiz vs Luis Ortiz Next?

Gary Russell Jr., WBC Featherweight World Champion
Porter SD 12: This is a tossup. If Shawn stays in Errol’s chest and remains in an aggressive manner, there’s a great chance that he takes this fight.

If Errol’s allowed to box and dictate the pace, then Errol has the best opportunity to win. If I have to pick, I’m going with Shawn Porter simply because I’ve known Shawn longer and our great relationship going back to the amateurs, not because anyone’s skill set is better than the other.

Thomas Hearns, Hall of Famer
Spence MD 12: Errol Spence and Shawn Porter are both excellent fighters, but I think Spence has the better skills and he’s undefeated, so I’m leaning toward him.

Porter can bring it, but Spence is the smarter, more accurate puncher. I see Spence landing more combinations and beating Porter by a majority decision.

Abner Mares, former three-division champion
Porter SD 12: A high percentage of the boxing community is going to pick Errol Spence to beat Shawn Porter, if not by knockout. But keep in mind that Shawn has faced better fighters.

In Shawn’s unique, awkward style, I believe he’s a better fighter than Spence, who has that relaxed, fundamental approach that looks beautiful, don’t get me wrong. I don’t think Spence has faced anyone with this relentless, in-your-face style which doesn’t allow you to sit back and think. Porter won’t let Spence get comfortable in there. Shawn’s always got a plan A, B, C and D, so I’m going for the underdog, Porter, to win a close, upset split-decision.

Mikey Garcia, former four-division champion
Spence W 12: I don’t believe Errol Spence will win by a knockout. I believe that it goes 12 rounds, but I do have Errol Spence beating Shawn Porter.

Keith Thurman, former unified world welterweight champion
Spence W 12 / TKO: This is two world champion warriors going at it in a great fight. They have a common opponent in Kell Brook, who beat Shawn Porter and was knocked out by Errol Spence.

That’s why my pick is Spence. Styles make fights, and Shawn’s aggression could be difficult for Spence to handle since Spence has never faced an opponent like Shawn.

Shawn’s gonna come hungry but Brook and I handled that pressure, and I believe that Spence – being a tall southpaw with power and a great jab – will be able to deal with it as well. Spence has the power to stop Shawn, and if he does, I believe that would happen in the later rounds, like he did Brook.

Angel Garcia, trainer of two-division world champion Danny Garcia
Porter W 12: Shawn Porter’s gonna come out applying pressure like he always does, and I’ve never seen Errol Spence deal with pressure like he’ll get in this one. Spence is used to backing people up and knocking ’em out.

But I’ve never seen him have to fight while backing up when he’s been hit with flush punches. If this fight goes the distance, I see Porter winning.

Julian Williams, Unified Super Welterweight World Champion
Spence W 12: Errol Spence-Shawn Porter is a 60-40 fight in Spence’s favor. Porter has trouble with guys who are physically strong and can hold him off, like Kell Brook, Danny Garcia and Yordenis Ugas.

Spence is that type of guy who can hold off Porter and stand his ground in the center of the ring. Spence won’t run right through Porter, but I favor Spence in a really tight, entertaining, very competitive decision.

Spence is the cleaner puncher, so Porter’s rough tactics won’t work on him. I see Spence winning a clear-cut decision, 8-to-4, or, 7-to-5 in rounds.

Yordenis Ugas, top welterweight contender
Porter W 12: It is a great confrontation of two world champions. I think Errol Spence is a favorite because of the great fighter he has proven to be. But Shawn Porter is a tough fighter with a great resume and will fight hard until the final bell. I have no favorite in this 50-50 fight, but I lean toward Porter to win.

Evander Holyfield, Hall of Famer
Spence MD 12: First of all, both fighters are good and each will be great one day. Styles make the difference, and it will be a great battle if both fighters perform like they usually do. But I’ve got Spence by majority decision.

Robert Guerrero, former three-time world champion
Porter SD 12: This is a very difficult fight to call, but I’ve gotta go with Shawn Porter to beat Errol Spence. With Spence being as tall as he is, Porter can’t try to box like he did against Yordenis Ugas or Spence will pick him apart.

Porter’s got that relentless pressure and stays busy with combination punching. One thing about Spence is he’s never had anybody in front of him like that.

Erickson Lubin, super welterweight contender
Spence UD 12: Errol Spence is younger, stronger, fresher, bigger and punches harder than Shawn Porter, and all of that is gonna play a role in Spence winning by a unanimous decision.
Porter will have some success if he can make it a rough, dirty fight, but I still see Spence winning comfortably on the cards on September 28.

Tony Harrison, WBC Super Welterweight World Champion
Spence W 12: Errol Spence will have it tough making adjustments in the beginning but pull away after round six. Shawn Porter has gotta start strong and try to establish himself as dominant from round one, but he will be worn down. If it is stopped, that will come from Porters’ father in the corner.

Jose Benavidez Sr., trainer of former world super middleweight champion David Benavidez
Porter SD 12: Shawn Porter has the style, talent and aggression to make Errol Spence uncomfortable in the fight. It’s a 50-50 fight, but I believe that’s what he’s gonna do from the first round on, winning a decision. I’m going with Porter.

Ruben Guerrero, trainer of former two-division world champion Robert Guerrero
Porter W 12: Errol Spence and Shawn Porter want this really badly, and it’s gonna be a close fight. I believe the one who is more aggressive wins the fight, so I’m picking Porter.

Sergey Lipinets, former world super lightweight champion
Spence W 12: Both guys are A-plus fighters, but given the fact that Shawn struggled with Yordenis Ugas, it’s obvious that he has a problem with tall and rangy fighters. Being a southpaw, Errol Spence will give Porter all he can handle and will most likely win.

Robert Garcia, trainer of former four-division world champion Mikey Garcia
Spence W 12: Shawn Porter is a very tough fighter who will come out pressuring as he always does, but I’ve really gotta go with Errol Spence by decision.

We know Spence is very strong and has power, but Shawn got through the power of Keith Thurman and Danny Garcia, so if he’s doing everything he’s supposed to, training-wise, I see Shawn eking out a decision.

Caleb Truax, former super middleweight world champion
Spence UD 12: Errol Spence against Shawn Porter is a rough, tough fight for the first five or six rounds, but I think Spence’s talent and skill level will be too much for Porter.

Spence may not dominate or knock Porter out, but I do see him controlling the fight and winning a clear unanimous decision for the victory.

Sergio Mora, former super welterweight world champion
Porter W 12: I really like this fight. Errol Spence’s pure power boxing versus Shawn Porter’s raw aggression and grit. Any fight with Porter will be punishing. This is type of fight that can get out of control for the cleaner boxer.

Expect Porter to maul Spence, not letting him get comfortable with cleaner punches. If Spence can’t control the tempo and hurt Porter coming in, I’m picking Porter for the upset decision. The referee will play a big role in the outcome of this one.

Andre Berto, former two-time welterweight world champion
Spence W 12: I see Errol Spence beating Shawn Porter by decision. Shawn can’t try to box with Errol, who is a long, rangy southpaw. Shawn needs to go in there and do what he knows how to do, but I don’t think it will be enough

Manny Pacquiao To Announce His Next Fight And His Retirement At The Same Time2K Total Shares
He Was Born A Century Ago Today: Walker Smith Jr, AKA Sugar Ray Robinson753 Total Shares
Canelo Alvarez vs. Artur Beterbiev targeted for 2022 at 175635 Total Shares
Canelo: I don’t care about the ring size, the fight with Saunders will go ahead626 Total Shares
Andy Ruiz vs Luis Ortiz Next?520 Total Shares

Manny Pacquiao To Announce His Next Fight And His Retirement At The Same Time2K Total Shares
He Was Born A Century Ago Today: Walker Smith Jr, AKA Sugar Ray Robinson753 Total Shares
Canelo Alvarez vs. Artur Beterbiev targeted for 2022 at 175635 Total Shares
Canelo: I don’t care about the ring size, the fight with Saunders will go ahead626 Total Shares
Andy Ruiz vs Luis Ortiz Next?520 Total Shares