Bernard Hopkins, who knows all about what it takes to fight and to be successful as an older boxer, says he is interested to see what Gennady Golovkin, aged 40, and Canelo Alvarez, aged 32, can do when they meet in their fast-approaching trilogy fight on September 17. But, as he made clear when speaking with Little Giant Boxing, “The Executioner” sees only one winner – Canelo, by a “beat-down.”

Hopkins, who studies upcoming fights quite meticulously, has even called the round in which he feels GGG will fall, and the punch that will get the job done for Canelo. 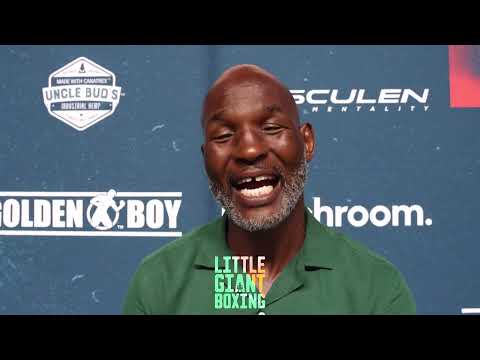 “It’s going to be interesting to see two guys who are a few years older and not as young as they were,” Hopkins said of GGG-Canelo III. “I think there’s going to be more blows coming from both sides. I’m picking Canelo by stoppage by the sixth or seventh round. I’m predicting Canelo will find his groove and then get a stoppage in the sixth or seventh. It looks like it will be a beat-down. I think it’ll be a liver shot, and that’s going to happen in the first four rounds. Canelo is a better shot type guy who wears you down, and then the head will be exposed to do what he wants to do, but that’s where it’ll start from. It’ll start from the bottom in bringing the head down.”

As we know, GGG has never been stopped, or even come close to being stopped, and neither has Canelo. As such, some fans may be surprised by Hopkins’ prediction of a somewhat quick stoppage win for Canelo. Canelo was unable to put a dent in Triple-G in fights one and two, and it could be the same again in the third fight. Then again, as Hopkins points out, both men are older now, with GGG especially being at veteran stage at age 40. Will that legendary Golovkin chin still be able to hold up to a bomb if one lands? This is just one of the big questions we are asking as we edge closer to what some say is the biggest non-heavyweight fight of the year.

Hopkins gets quite a few of his predictions right, but is he correct in what he says will happen here? It will be round 25 on the night of September 17th.