When it comes to compiling a list of the most consistently exciting fighters ever, two names spring to mind as quickly as a Sugar Ray Robinson punch found its mark (and Sugar Ray, as super-special as he was, and as exciting as he was in many of his fights, is not one of the two). Arturo Gatti and Matthew Saad Muhammad are these two thrill-a-minute ring warriors, and it is undeniable that both men, each of whom have sadly left us, gave their sport too many epic, sensational fights to name without compiling a heck of a long list.

You can take your pick when it comes to who was the most exciting fighter of the two, but Gatti and Muhammad – both paying the price for their guts, bravery and their ability, indeed willingness, to take punishment (and it may well have been a sad existence for both legends had they lived into old age) – will be eternally celebrated by fight fans. 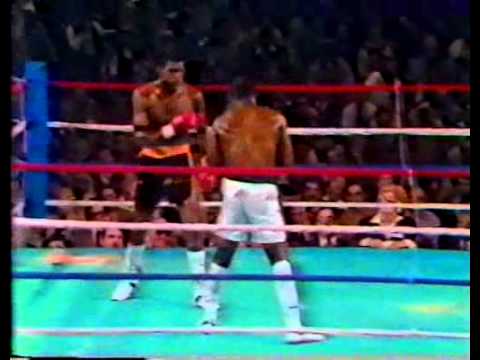 Muhammad ran out of miracle turnarounds 40 years ago, when the snarlingly tough and deceptively clever Dwight Muhammad Qawi chopped down what was left of “Miracle Matthew” in their second fight.

Muhammad, who had sent fans into a frenzy with his incredible wars with Marvin Johnson, Yaqui Lopez, and John Conteh, had hit the wall in the December 1981 fight with former jailbird Qawi (then known as Dwight Braxton). A draining effort at making the 175 pound limit was forwarded as a big reason for the 10th round stoppage loss he suffered, and the rematch came in August of the following year. But Muhammad, taking the rematch just a couple of days after his 28th birthday, found out he had almost nothing left.

Qawi, on the other hand, was getting better and better. One year older than the former champ, but a whole lot less worn (Dwight having had no amateur career, going pro in 1978), “The Camden Buzzsaw” smiled (or snarled) as he fought; he enjoyed dishing out a beating with the other guy unable to do much of anything about it. And a faded Muhammad couldn’t do anything about the hammering that came his way in his home town of Philadelphia on August 7.

Qawi, short at just 5’7” yet capable, once again of outjabbing the taller Muhammad, came out tearing into his rival and he wouldn’t stop tearing until he got the job done. Qawi’s right hand landed as he let loose with the venom he carried in both hands. Already it was looking like a bad night for the former champ. But as everyone knew, Muhammad could never be written off.

Qawi, 17-1-1, was on fire though, and he was devouring Muhammad, his right hand really stunning the challenger in round two. The crowd was already hollering loud, with many of them no doubt praying for Saad to pull put yet another stunning turnaround. But Qawi, a non-stop punching machine, was just too strong, too on top of his game.

Muhammad managed to hang in there yet he was being driven back, made to take shot after shot. A Qawi combination sent Muhammad down in the third and the writing was well and truly on the wall. Somehow, Muhammad, 32-4-2, made it into round six. Qawi, though, was unleashing all the frustrations he no doubt felt whilst incarcerated. It was a beating.

Finally, in the sixth, a relentless two-handed barrage from Qawi forced the referee to dive in and save a totally finished Muhammad. It was in many ways the end of an era. As great as Qawi was, and as great as Muhammad was, the thought of what kind of savage action we would have been treated to had these two met when both were at their peak is enough to make any fight fan tremble.

As it is, these two modern greats didn’t quite meet when both were enjoying their prime years.